The Hidden Water We Use 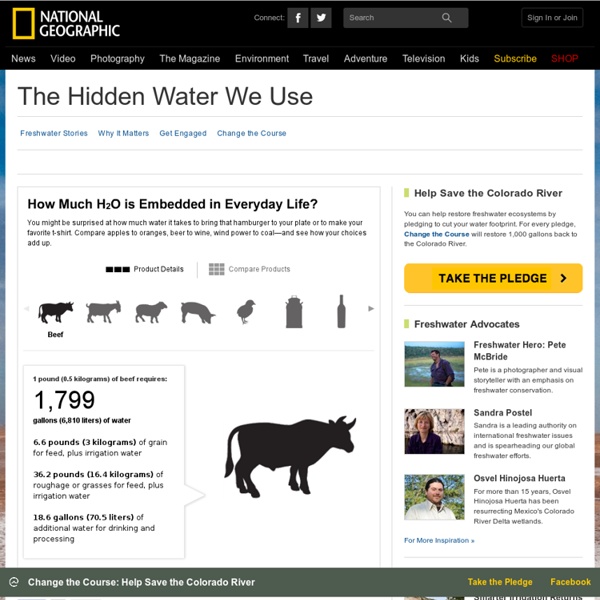 Water Treatment Plant Early American settlers tookwater quality for granted. In lightly settled towns and villages inthe 17th and 18th centuries, people found clean drinking water innearby streams and lakes, as well as in wells they dug to accessgroundwater. However, as population densities increased in urbancenters, many water supplies became contaminated, and people fellill as a result of drinking the impure water. Today, in developing countries around theworld, disease-causing water-borne microbes and chemical contaminantssicken millions of people each year. In developed countries such as the United States, governmentagencies require that the approximately 160,000 water treatmentfacilities supplying drinking water nationwide meet strict safetyand quality standards. Public drinking water generallycomes to a treatment facility either from underground aquifers orfrom surface streams and reservoirs such as the one featured inthis video segment.

Water PepsiCo takes a comprehensive approach to water stewardship. Because we use water to make our products, maintaining the highest-quality standards for consumers means using the best water possible. At the same time, it is essential that we treat water as the limited resource it is by optimizing our water use through greater efficiency, innovative processes and new technologies. We have made great strides in reducing water use in our direct operations. Water Stewardship We achieved our goal, four years ahead of schedule, to improve global operational water-use efficiency by 20 percent per unit of production by 2015, compared to a 2006 baseline. Conserving Water at PepsiCo's Funza, Colombia Facility Watch Video Our foods facility in Funza, Colombia provides a strong example of how PepsiCo is implementing innovative solutions to conserve water. In recognition of our efforts, PepsiCo was honored with both the prestigious 2012 Stockholm Industry Water Award and the U.S. Positive Water Balance

World's biggest pool holds 66 million gallons The Crystal Lagoon at San Alfonso del Mar resort, Chile, is large enough for sailing and comes with its own fake beach By Lyle Brennan Published: 08:14 GMT, 21 May 2012 | Updated: 07:03 GMT, 1 June 2014 At the San Alfonso del Mar resort in Chile, a quick dip could well turn into a marathon. Swimming a length in this, the world's largest outdoor pool, would mean stroke after stroke for more than three fifths of a mile - that's 20 Olympic-size swimming pools. The enormous man-made lagoon is set halfway up the country's Pacific coast, in the city of Algarrobo, and is filled with 66 million gallons of crystal clear seawater. A little slice of the Pacific: The world's biggest pool is three fifths of a mile long and draws water from the ocean, cleaning it and allowing the sun to warm it to 26C The pool opened in December 2006 after nearly five years of construction work and is said to have set developers back £2million. By the sea: A couple stroll along the shores of the artificial lake

Weather New Englanders have a saying: "If you don't like the weather, just wait a minute." Weather forecasts may be more stable in other parts of the world, but the basic idea stands. Weather is dynamic, the product of interacting forces we are only beginning to understand. Witness the weather extremes caused by El Niño in 1997 and 1998. Weather may change on a daily basis, but climate changes over geologic time. Join us as we explore the forces behind the weather.

23 Yoga Styles Every Yoga Lover Should Know Yoga has upgraded itself from just being a mere form of exercise to enjoy physical benefits to a wholesome way of transforming oneself, both physically and spiritually. And this has resulted in the rise of various styles of yoga. From the simple Hatha yoga to Hot Yoga and Anti-gravity yoga, you name it, you have it. While all the yoga styles are based on a set of yoga asanas, each style has its own list of benefits. 1. It is ideally called as the basic yoga. 2. A synchronized breathing pattern with Surya Namaskar pose as the base, Vinyasa yoga involves a fast pace and vigorous movements when compared to Hatha yoga. A simple example for a Vinyasa yoga pose is the Cat Cow pose, where you arch your back towards the floor and ceiling alternatively, while breathing accordingly. 3. As mentioned above, the basic principles of Vinyasa yoga form the basis for this yoga style. This style transforms the simple static Hatha yoga poses into dynamic poses with a vigorous flow. 4. 5. 6. 7. 8. 9. 10.

The Water-Energy Nexus | Four Degrees Flo Bullough writes on the concept of the water-energy nexus; its implications for energy and water security and the impact of climate change and future planning and regulation. I first came across the concept of the water-energy nexus when the former UK Chief Scientific Advisor John Beddington discussed the interdependence of food, water and energy as part of his tenure at government: something he described as a ‘perfect storm’. Since then, much has been written about this topic and below is an overview of the issues as they relate to the geosciences. Tarbela Dam on the Indus river in pakistan. The dam was completed in 1974 and was designed to store water from the Indus River for irrigation, flood control, and the generation of hydroelectric power. The use of water for power captures the interdependence of energy and water. Water stress and scarcity is one of the most urgent cross-cutting challenges facing the world today and is intrinsically linked with the need for energy.

Garbage If your habits resemble those of average Americans, you generate about 4.6 pounds of solid trash per day. This adds up to big trouble for the environment. Americans are generating waste products faster than nature can break them down and using up resources faster than they can be replaced. How can we find ways to meet our current economic and social needs without compromising the ability of our children, and our children's children, to do the same? Our success will depend on understanding the difference between Sustainable practices: practices that provide ongoing economic and social benefits without degrading the environment. In this exhibit, you can find out how to improve next year's environmental record. Start by learning a few facts about solid waste.