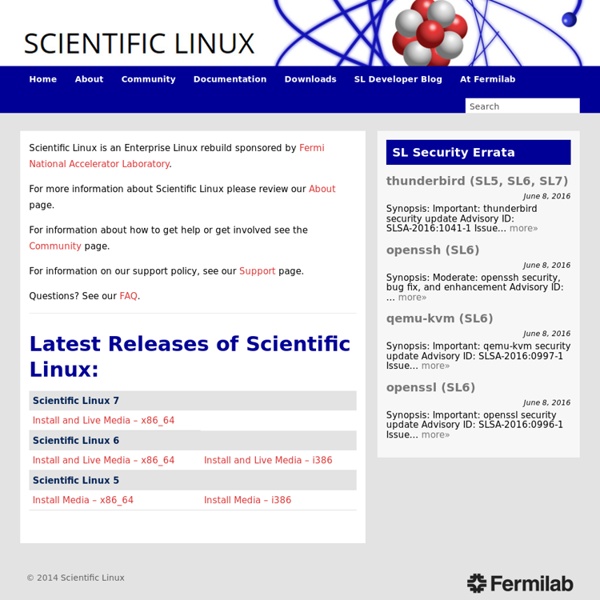 Mandriva Official Ubuntu Documentation Dude! Sweeet! » PCLinuxOS Filesystem Hierarchy Standard Introduction This page is the home of the Filesystem Hierarchy Standard (FHS). The current version is 2.3. It was announced on January 29, 2004. The filesystem standard has been designed to be used by Unix distribution developers, package developers, and system implementors. FHS Development The mailing list is available to discuss interpretations of the FHS document and of possible future changes and additions. The process is overseen by FHS editors, Rusty Russell, Daniel Quinlan, and Christopher Yeoh. FHS Documents, Resources, and Links: Any discrepancy found in the various formats of the specification will be resolved in favor of the PDF version. FHS 2.2 release:

Fusion Linux | The Home of the Fedora Remix Done Right ClearFoundation develops ClearOS, a Linux Network, Gateway, Server ALT Linux - main YDL.net What is Yellow Dog Linux? An open source, Linux operating system for home, office, server, and cluster users. Built upon the RHEL/CentOS core, Fixstars has since the spring of 1999 developed and maintained YDL for the Power architecture family of CPUs. This focus and dedication has lead to the world's leading Linux for the Power architecture. What is included? Yellow Dog Linux combines a no non-sense graphical installer with support for a wide range of Power hardware, leading (but not bleeding) edge kernels and stable, functional compilers for code development. A history of dedication and innovation. YDL v6.1 brings to close a decade of support for the Power architecture by Terra Soft while introducing Fixstars' first release.