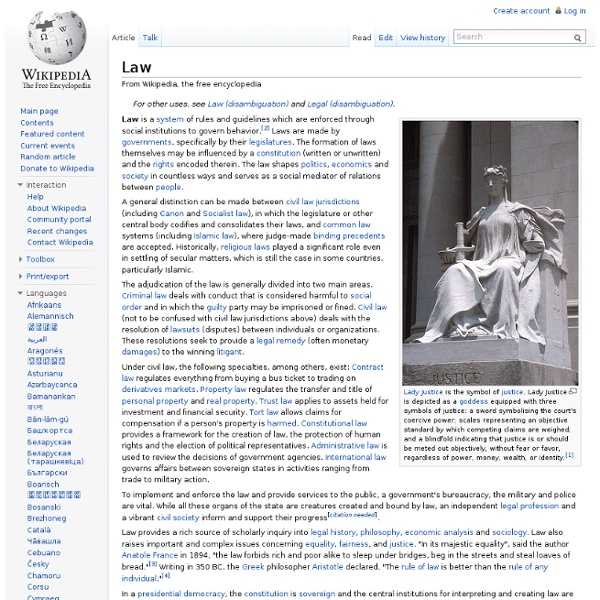 "Legal concept" redirects here. Lady Justice, a symbol of justice. She is depicted as a goddess equipped with three items: a sword, symbolising the coercive power of a court; scales, representing an objective standard by which competing claims are weighed; and a blindfold indicating that justice should be impartial and meted out objectively, without fear or favor and regardless of money, wealth, power or identity.[1] Law is a term which does not have a universally accepted definition,[2] but one definition is that law is a system of rules and guidelines which are enforced through social institutions to govern behaviour.[3] Laws can be made by legislatures through legislation (resulting in statutes), the executive through decrees and regulations, or judges through binding precedents (normally in common law jurisdictions). To implement and enforce the law and provide services to the public by public servants, a government's bureaucracy, military, and police are vital. Definition[edit] Related:  -

Health Care Health care (or healthcare) is the diagnosis, treatment, and prevention of disease, illness, injury, and other physical and mental impairments in humans. Health care is delivered by practitioners in allied health, dentistry, midwifery-obstetrics , medicine, nursing, optometry, pharmacy and other care providers. It refers to the work done in providing primary care, secondary care, and tertiary care, as well as in public health. Access to health care varies across countries, groups, and individuals, largely influenced by social and economic conditions as well as the health policies in place. Health care can contribute to a significant part of a country's economy. Health care is conventionally regarded as an important determinant in promoting the general physical and mental health and well-being of people around the world. Health care delivery[edit] Primary care may be provided in community health centres. Primary care[edit] Secondary care[edit] Tertiary care[edit] Quaternary care[edit]

Prosecute the Pope The Neville Brothers were formed by the hard life and hard times, but they are also heirs to America’s richest musical tradition: the aural gumbo of New Orleans. As New Orleans Jazz fest kicks off here’s John Ed Bradley’s 1991 GQ profile on the Neville Brothers. The Neville’s are a national treasure and this behind-the-scenes look lets us in on the men behind the magic. The subject is in good hands. Bradley is the author of six novels, including Tupelo Nights, as well as one of the finest sports memoirs ever written, It Never Rains in Tiger Stadium . In the meantime, dig into his story, “Bards of the Bayou” and then do yourself a favor and listen to some tunes by the Neville brothers. Tipitina's in the warm blue fog, squatting beneath a crescent moon so sharp and clean you could shave a wild hog with it. Art Neville enters the famous New Orleans honky-tonk wearing a hipster's suit and studded leather boots, his wife, Lorraine, in hand. "My new album's called Look for God,” he says. "No.

Myth of Er A Renaissance manuscript Latin translation of The Republic The story begins as a man named Er (; Greek: Ἤρ, gen.: Ἠρός; not to be confused with Eros: ; Greek: Ἔρως) son of Ἀρμένιος, Armenios of Pamphylia dies in battle. When the bodies of those who died in the battle are collected, ten days after his death, Er remains undecomposed. Two days later he revives on his funeral-pyre and tells others of his journey in the afterlife, including an account of reincarnation and the celestial spheres of the astral plane. The tale includes the idea that moral people are rewarded and immoral people punished after death. Although called the Myth of Er, the word "myth" means "word, speech, account", rather than the modern meaning. Er's tale[edit] With many other souls as his companions, Er had come across an awe-inspiring place with four openings – two into and out of the sky and two into and out of the ground. After this, each soul was assigned a guardian spirit to help him or her through their life.

API In computer programming, an application programming interface (API) specifies how some software components should interact with each other. Detailed explanation[edit] API in procedural languages[edit] In most procedural languages, an API specifies a set of functions or routines that accomplish a specific task or are allowed to interact with a specific software component. This specification is presented in a human readable format in paper books, or in electronic formats like ebooks or as man pages. For example, the math API on Unix systems is a specification on how to use the mathematical functions included in the math library. The Unix command man 3 sqrt presents the signature of the function sqrt in the form: SYNOPSIS #include <math.h> double sqrt(double X); float sqrtf(float X); DESCRIPTION sqrt computes the positive square root of the argument. ... $ perldoc -f sqrt sqrt EXPR sqrt #Return the square root of EXPR. API in object-oriented languages[edit] API libraries and frameworks[edit]

3 things to know about the proposed mask law - Canada Federal legislators are currently debating a proposed law that could carry a 10-year prison term for concealing your identity during a riot. Introduced last November by Conservative backbencher Blake Richards, Bill C-309 was a private member’s bill inspired by the Stanley Cup riot in Vancouver last June and the G20 riot in Toronto in June 2010. Richards said police had been seeking better ways to respond to public assemblies that become dangerous. It is already illegal to take part in a riot, but Bill C-309 would create a separate offence criminalizing the use of a mask while participating in such an action. The bill is back in the House of Commons on Monday before going to the Senate for final approval. The bill originally proposed a maximum penalty of five years imprisonment, but last week Richards proposed to increase that to 10 years in order to bring it in line with the existing Criminal Code offences related to wearing a disguise. When does a protest become a riot?

F. M. Cornford Francis Macdonald Cornford FBA (27 February 1874 – 3 January 1943) was an English classical scholar and translator known for influential work on ancient philosophy, notably Plato, Parmenides, Thucydides, and ancient Greek religion. Frances Cornford, his wife, was a noted poet. Due to the similarity of their forenames, he was known to family as "FMC" and his wife as "FCC". Early life and family[edit] Cornford was born in Eastbourne, Sussex, on 27 February 1874. In 1909 Cornford married the poet Frances Darwin, daughter of Sir Francis Darwin and Ellen Wordsworth Darwin, née Crofts, and a granddaughter of Charles Darwin. Academic career[edit] Cornford was educated at Trinity College, Cambridge, where he was a Fellow from 1899 and held a teaching post from 1902.[5] He became the first Laurence Professor of Ancient Philosophy in 1931 and was elected a Fellow of the British Academy in 1937. He died on 3 January 1943 in his home, Conduit Head in Cambridge. Works[edit] See also[edit] [edit]