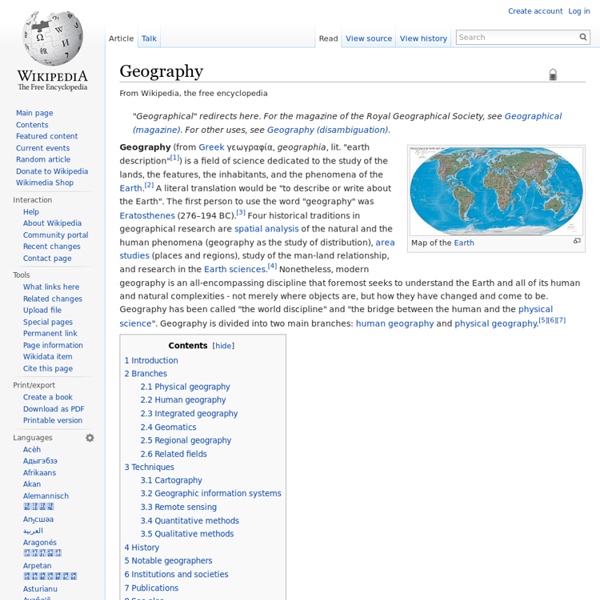 Geography (from Greek γεωγραφία, geographia, lit. "earth description"[1]) is a field of science dedicated to the study of the lands, the features, the inhabitants, and the phenomena of the Earth.[2] A literal translation would be "to describe or write about the Earth". The first person to use the word "geography" was Eratosthenes (276–194 BC).[3] Four historical traditions in geographical research are spatial analysis of the natural and the human phenomena (geography as the study of distribution), area studies (places and regions), study of the man-land relationship, and research in the Earth sciences.[4] Nonetheless, modern geography is an all-encompassing discipline that foremost seeks to understand the Earth and all of its human and natural complexities - not merely where objects are, but how they have changed and come to be. Geography has been called "the world discipline" and "the bridge between the human and the physical science". Introduction Branches Physical geography Geomatics

Module Seven (B), Activity Two | Exploring Africa Colonial Exploration and Conquest in Africa This activity discusses colonialism in Africa. Colonialism has also been addressed in Module Six: Africa and Its Geography, Module Nine: Economics of Africa, Module Ten: African Politics and Government, and Module Fifteen: Africa and the World. What does colonialism mean? Take a couple of minutes to write a few sentences describing what you know already about colonialism in your Activity Journal. Also write down a few questions addressing what you do not understand or would like to learn about colonialism. Student Journal Assignment: What does colonialism mean? Colonialism is generally defined as the occupation and control of one nation by another. Look at the map below that lists colonial languages that are spoken in the various nations of Africa. Colonial Conquest in Africa The 19th century in Europe was a time of industrialization. Politics in Europe also led to the colonization of Africa. The Treaty of Berlin and the “Scramble for Africa” 1.