What Are Anyons? - Amazing Particle Only Arises in Two Dimensions. Scientists have observed particle-like anyons for the first time.One experiment used a particle collider, and the other used a prepared chip maze.Anyons hold multiple charge positions and can "remember" represetations of data. 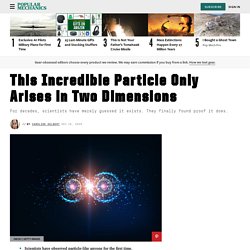 Physicists have confirmed the existence of an extraordinary, flat particle that could be the key that unlocks quantum computing. Get unlimited access to the weird world of Pop Mech. What is the rare and improbable anyon, and how on Earth did scientists verify them? “[T]hese particle-like objects only arise in realms confined to two dimensions, and then only under certain circumstances—like at temperatures near absolute zero and in the presence of a strong magnetic field,” Discover explains. Scientists have theorized about these flat, peculiar “particle-like objects” since the 1980s, and the very nature of them has made it sometimes seem impossible to ever verify them. P-51 Mustang vs Spitfire: Which Was The Best? During WWII, both the North American P-51 Mustang and the Supermarine Spitfire dominated the skies over Europe. 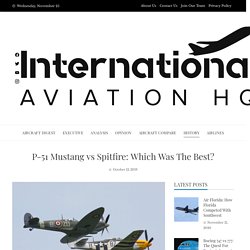 How Kodak Exposed The Atomic Bomb. 1. World's Roundest Object! Redefining The Kilogram. Scientists Detected Neutrinos From One Second After the Big Bang. A Different Kind of Theory of Everything. “One of the amazing characteristics of nature is this variety of interpretational schemes,” Feynman said. What’s more, this multifariousness applies only to the true laws of nature—it doesn’t work if the laws are misstated. “If you modify the laws much, you find you can only write them in fewer ways,” Feynman said.

The BIG Bell test happened with the help of 100,000 people around the world, who used an online video game to contribute their own random sequences of zeros and ones to 12 labs on five continents, including in Brisbane, Australia; Shanghai, China; Vienna, Austria; Rome, Italy; Munich, Germany; Zurich, Switzerland; Nice, France; Barcelona, Spain; Buenos Aires, Argentina; Concepción, Chile; and Boulder, Colorado. 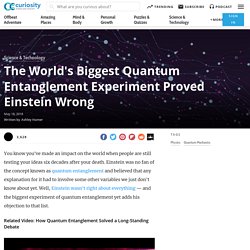 In many different individual experiments, those labs used the numbers, or "bits," to set the angles of polarizers and other tools to determine how the entangled particles would be measured. The results, published in May 2018 in the journal Nature, are robust: "The observed correlations strongly contradict local realism," the authors write. Sorry, Einstein. You'll always have relativity. Get stories like this one in your inbox each morning.

The kilogram is being redefined – a physicist explains. How much is a kilogram? 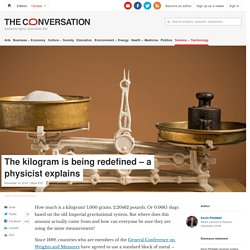 1,000 grams. 2.20462 pounds. Or 0.0685 slugs based on the old Imperial gravitational system. But where does this amount actually come from and how can everyone be sure they are using the same measurement? The Physics of a Star Wars Bomber Dropping Bombs in Space. Mystery particle spotted? Discovery would require physics so weird that nobody has even thought of it. There was a huge amount of excitement when the Higgs boson was first spotted back in 2012 – a discovery that bagged the Nobel Prize for Physics in 2013. 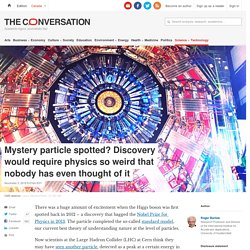 The particle completed the so-called standard model, our current best theory of understanding nature at the level of particles. Now scientists at the Large Hadron Collider (LHC) at Cern think they may have seen another particle, detected as a peak at a certain energy in the data, although the finding is yet to be confirmed. Again there’s a lot of excitement among particle physicists, but this time it is mixed with a sense of anxiety. Unlike the Higgs particle, which confirmed our understanding of physical reality, this new particle seems to threaten it. Thorium can give humanity clean, pollution free energy. The Secrets Of Quantum Physics (Full Astrophysics Documentary)

Physicists: Time Crystals Exist, and We Can Create Them. Really Strange and Really Real It’s confirmed. 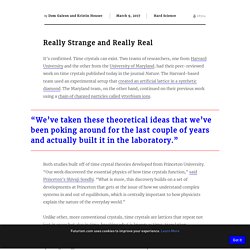 Time crystals can exist. Two teams of researchers, one from Harvard University and the other from the University of Maryland, had their peer-reviewed work on time crystals published today in the journal Nature. The Harvard-based team used an experimental setup that created an artificial lattice in a synthetic diamond. The Maryland team, on the other hand, continued on their previous work using a chain of charged particles called ytterbium ions. Solved: The Spaghetti Physics Problem That Stumped Richard Feynman. Scientists Finally Witnessed a Phenomenon That Einstein Thought "Impossible" In Brief Astronomers have observered a phenomenon known as gravitational microlensing in stars for the first time. 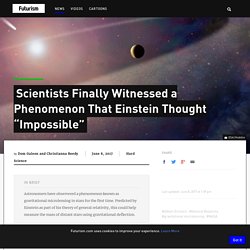 Predicted by Einstein as part of his theory of general relativity, this could help measure the mass of distant stars using gravitational deflection. Celestial Warping According to Einstein’s general relativity theory, spacetime bends or gets distorted when it crosses a massive object due to its gravity. In the same manner, Einstein theorized that such a distortion also happens to light from a distant star when it passes another star along a line of sight from Earth — like a near stellar eclipse, so to speak. A "World First" Fusion Reactor Just Created Its First Plasma. Achieving First Plasma After being turned on for the first time, the UK’s newest fusion reactor has achieved first plasma. 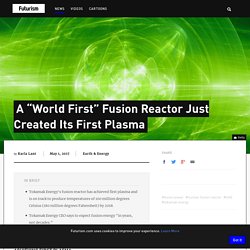 This simply means that the reactor was able to successfully generate a molten mass of electrically-charged gas — plasma — inside its core. Called the ST40, the reactor was constructed by Tokamak Energy, one of the leading private fusion energy companies in the world. The company was founded in 2009 with the express purpose of designing and developing small fusion reactors to introduce fusion power into the grid by 2030. Helium-3. Helium-3 (He-3) is a light, non-radioactive isotope of helium with two protons and one neutron. 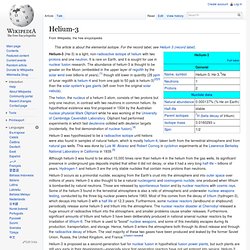 It is rare on Earth, and it is sought for use in nuclear fusion research. The abundance of helium-3 is thought to be greater on the Moon (embedded in the upper layer of regolith by the solar wind over billions of years),[1] though still lower in quantity (28 ppm of lunar regolith is helium-4 and from one ppb to 50 ppb is helium-3)[2][3] than the solar system's gas giants (left over from the original solar nebula).

Helium-3 was hypothesized to be a radioactive isotope until helions were also found in samples of natural helium, which is mostly helium-4, taken both from the terrestrial atmosphere and from natural gas wells. This was done by Luis W. Neutrinos on Ice: Astronomers' Long Hunt for Source of Extragalactic "Ghost Particles" Pays Off. Ever since the 1950s, when physicists first dreamed up the idea of doing astronomy with neutrinos, the holy grail has been to observe the first object outside our solar system that emits these ghostly particles. 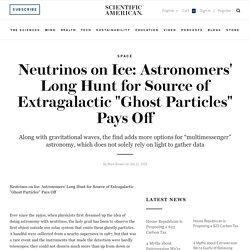 A handful were collected from a nearby supernova in 1987, but that was a rare event and the instruments that made the detection were hardly telescopes; they could not discern much more than up from down or left from right. Three papers released today (two in Science and one on the preprint server arXiv) announce the culmination of this 60-year quest. IceCube, a strange telescope made of deep glacial ice at the South Pole, has detected neutrinos from a distant, luminous galaxy.

The neutrino is nearly massless and flies through space at almost the speed of light. Its nickname, “ghost particle,” points to the fact it rarely interacts with any form of matter and is therefore devilishly difficult to detect. Entanglement is spooky, but not action at a distance. First of two (entangled) parts. Read part two.

A couple of weeks before last Halloween, physicists in the Netherlands treated the physics world with experimental proof of what Einstein called “spooky action at a distance.” It’s not the first time experiments have demonstrated the spooky phenomenon, known as quantum entanglement. But this particular experiment closed some loopholes cited by skeptics who hoped that entanglement would turn out not to be so spooky. The verdict is in, and spooky wins. Einstein didn’t like it. One newsmagazine’s story, for instance, carried a headline screaming “What Einstein got wrong about the speed of light.”

It is also sometimes incorrectly reported that Einstein didn’t believe in entanglement or that he thought quantum theory must be wrong because of it. China Shatters "Spooky Action at a Distance" Record, Preps for Quantum Internet. In a landmark study, a team of Chinese scientists using an experimental satellite has tested quantum entanglement over unprecedented distances, beaming entangled pairs of photons to three ground stations across China—each separated by more than 1,200 kilometers. The test verifies a mysterious and long-held tenet of quantum theory, and firmly establishes China as the front-runner in a burgeoning “quantum space race” to create a secure, quantum-based global communications network—that is, a potentially unhackable “quantum internet” that would be of immense geopolitical importance.

The findings were published Thursday in Science. “China has taken the leadership in quantum communication,” says Nicolas Gisin, a physicist at the University of Geneva who was not involved in the study. “This demonstrates that global quantum communication is possible and will be achieved in the near future.” “I am happy that the Micius works so well,” Zeilinger says. —Additional reporting by Jesse Dunietz. The Law of Vibration. Because science has shown us that dogs can detect sounds we can't. We rely on science to show us what´s true or not. Science is the number one "truth provider". This doesn´t mean that absence of evidence is evidence of absence. In other words, if science can´t prove something it doesn´t mean it´s not real. We need to open up to the idea that there are things in our lives going on which might be true even though we can't use our five senses or science to verify it - like the Law of Vibration.

Carl Sagan Explains How Stars Are Born, Live, Die, and Give Us Life. Google's Nuclear Fusion Project Is Paying Off - Google and Tri Alpha Energy Improve Plasma Generator. Mind-bending questions from physics. Thermodynamics - How does defrosting your freezer save energy? Another model: A coil or serpentine through which refrigerant fluid flows has a total length x=L. Tributes pour in for Stephen Hawking, the famous theoretical physicist who died at age 76. Acclaimed British theoretical physicist, cosmologist and author Stephen Hawking has died aged 76. The Science of Bubbles (Full Science Documentary)

The Quest for Absolute Zero Turns Up Strange and Surreal Superfluids. Getting anything down to true absolute zero—where there is no atomic movement whatsoever—is probably a physical impossibility. But in our quest to see how cold things can get, we've come across some pretty unusual states of matter. Newfound Wormhole Allows Information to Escape Black Holes. The single strange repeating fast radio burst is at it again. Fast radio bursts, or FRBs, are one of the hottest topics in astronomy right now. These intense blasts of radio energy reach us from outside the galaxy, lasting only milliseconds before they disappear once more. Astronomers aren’t sure what causes them, and none of these bursts have ever repeated — except one, FRB 121102, which made headlines with the identification of its host galaxy, sitting nearly 3 billion light-years away.

Now, a Chinese team has broken the distance record by teleporting particles to a satellite in space. When we talk about teleportation, we should be clear about exactly what that means. Nobody's beaming people to space like in Star Trek. Instead, quantum teleportation is a complicated and delicate process involving sending information across space using entangled particles and reassembling it somewhere else. Schrödinger’s Cat: Explained. Erwin Schrödinger was born in Vienna on August 12, 1887 and was awarded the Nobel Prize in Physics in 1933. Could cold spot in the sky be a bruise from a collision with a parallel universe? 'We Don't Planet' Episode 3: What's Up with Gravitational Lensing? Jim Al-Khalili: Is Time Travel Possible? Determinism, Relativity and the Arrow of Time (2011) Fermilab. Better Nuclear Power Through Ping Pong.

DIY Homemade Kirlian Photographs. Cymatics.org. The Sound of Science. Diffusion Science radio. How do you skim a stone 51 times?