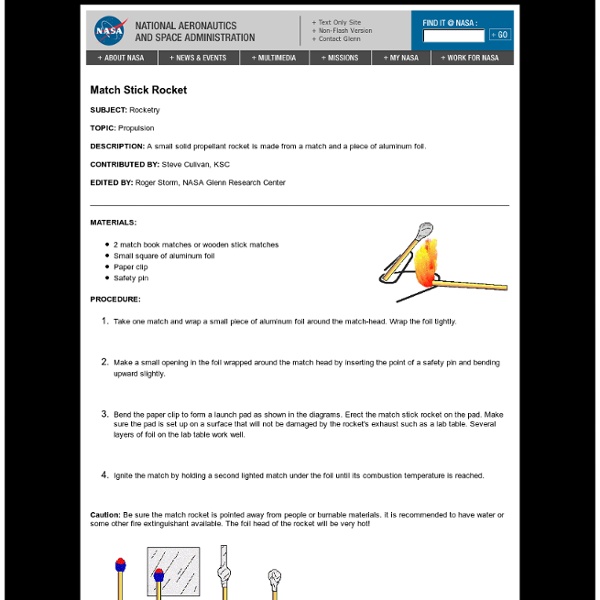 Match Stick Rocket SUBJECT: Rocketry TOPIC: Propulsion DESCRIPTION: A small solid propellant rocket is made from a match and a piece of aluminum foil. CONTRIBUTED BY: Steve Culivan, KSC EDITED BY: Roger Storm, NASA Glenn Research Center 2 match book matches or wooden stick matches Small square of aluminum foil Paper clip Safety pin Take one match and wrap a small piece of aluminum foil around the match-head. Caution: Be sure the match rocket is pointed away from people or burnable materials. it is recommended to have water or some other fire extinguishant available. DISCUSSION: The match stick rocket demonstrates Isaac Newton's Laws of Motion as they relate to rocketry. In an interesting variation of the experiment, try making holes of different diameters to let the combustion products out at different rates. Return to Rocket Activities Return to Aerospace Activities Page Newton's Third Law Rocket Thrust Aerospace Education Services Project Oklahoma State University

Surprise the Ones You Love (14 pics Dec 24/11 Surprise the Ones You Love (14 pics) Here are instructions for a very special gift for the people you love. Buy a Kinder Surprise. Carefully unwrap it, but be careful to not damage the package. Use a knife to cut the Kinder chocolate egg in half. Take the toy out. Write your special message or use other surprise gift. Roll up your message. Close the container. Pour boiling hot water over a sharp kitchen knife. Use the hot knife to melt the edge of the chocolate egg’s halves. Quickly place the container inside the two halves. Quickly seal the two halves while the edges are still soft and melted. Here comes the most difficult part. Lastly give the gift to your second half and say something like, “I bought bread and some sweets for you.”

How To Build A Fireball You Can Hold&Video - StumbleUpon Geek Genius: How To Get The Latest Gadgets Without Breaking The Bank photo: Harshit Sekhon Tired of spending big bucks every time Apple (AAPL) releases a new version of your go-to gadget? (Hint: this happens every year). Here are five ways to find discounts on all the gadgets you want: RedLaser Bargain hunters swear by RedLaser, a free application for iPhone and Android phones that scans item bar codes to find the merchant that sells it at the lowest price. ChinaBuye Where can you get a laptop for under $100? NexTag You’ve probably heard of NexTag, a price comparison site that now boasts 30 million users. Games Tester Loan Processing Specialist Sarah Horton knows a thing or two about saving money. Property Room Between drug busts and other police seizures, a whole lot of ownerless, high-ticket items end up in police custody. Shane Snow is Editor-in-chief of Contently.com, which contributed this post exclusively for Mint.

Thermal Physics Jokes As we all know, it takes 1 calorie to heat 1 gram of water 1 degree centigrade. Translated into meaningful terms, this means that if you eat a very cold dessert (generally consisting of water in large part), the natural processes which raise the consumed dessert to body temperature during the digestive cycle literally sucks the calories out of the only available source, your body fat. For example, a dessert served and eaten at near 0 degrees C (32.2 deg. F) will in a short time be raised to the normal body temperature of 37 degrees C (98.6 deg. F). For each gram of dessert eaten, that process takes approximately 37 calories as stated above. Obviously, the more cold dessert you eat,the better off you are and the faster you will lose weight, if that is your goal. Frozen desserts, e.g., ice cream, are even more beneficial, since it takes 83 cal. Happy eating! School of Physics, University of Sydney

Working Model of Stephenson's STEAM ENGINE made of GLASS ! Rare! Video Log in High-Tech: Software, Hardware, and More Cynthia Yildirim Working Model of Stephenson's STEAM ENGINE made of GLASS ! Rare! This Model of Stephenson's Steam Engine was made in 2008 by master glassblower Michal Zahradník. posted 3 years ago © 2014 Redux, Inc. about redux | contact us | copyright | legal Creative Recycling Of light Bulb into Valuable Things | Weird Pictures,... - StumbleUpon When a light bulb burns out, we rarely give it a second thought. You can lend your imagination toward this fragile household item, intent on giving burnt out bulbs a second life as something very different, and aesthetically pleasing. It’s very easy to make, use of turning a light bulb into an oil burner, terrarium and many another interesting things. Used light bulbs, typically destined for the trash bin, could be the setting for an adorable miniature terrarium, practically any clear glass container can contain a tiny greenhouse, providing humidity and warmth to plants. Here are few amazing examples to use as inspiration.

Pure Evil Prank of the Day Chandra :: Photo Album :: The Big Chandra Picture The Big Chandra Picture In more than a decade of operation, NASA's Chandra X-ray Observatory has transformed our view of the high-energy Universe with its ability to make exquisite X-ray images of star clusters, supernova remnants, galactic eruptions, and collisions between clusters of galaxies. As Chandra expands the realm of the known, it continues to raise new questions and point the way for future exploration. This photo blog presents some of Chandra's most spectacular images in a large and shareable format. 10 Apr 2014 G352.7-0.1: Supernovas are the spectacular ends to the lives of many massive stars. 03 Apr 2014 El Gordo: This is a composite image of X-rays from Chandra and optical data from Hubble of the galaxy cluster ACT-CL J0102-4915, located about 7 billion light years from Earth. 20 Mar 2014 DEM L241: When a massive star runs out fuel, it collapses and explodes as a supernova. 05 Mar 2014 RX J1131-1231: A quasar located about 6 billion light years from Earth. 04 Mar 2014

page corner bookmarks | I Could Make That - StumbleUpon This project comes to you at the request of Twitterer @GCcapitalM. I used to believe that a person could never have too many books, or too many bookmarks. Then I moved into an apartment slightly larger than some people’s closets (and much smaller than many people’s garages) and all these beliefs got turned on their naïeve little heads. But what a person can always look for more of is really cool unique bookmarks. Page corner bookmarks are cute, practical and deeply under-represented in the world.* They’re easy to make, easy to customize, and will set you apart from all those same-same flat rectangular bookmarks. If you like this tutorial, here are a couple others that might be up your alley. If you’re loving the toothy monster vibe, check out these simple monster heating bags, filled with rice or wheat and entirely microwavable, to keep toes or fingers or tummies warm during the chilly winter months. What you’ll need: Putting it all together: 1) Follow steps 2 and 3 from above.

Deep-Fried Ravioli On a Stick Deep-Fried Ravioli On a Stick At the very tip top of my food blogger inspirations list is a man whose blog I have admired since the first time I ever hit “publish” on Just a Taste. And that’s why the second his cookbook hit stores, I sprinted to my nearest Barnes & Noble and picked up a copy. Matt Armendariz, you are one talented dude. Matt’s book, On a Stick!, is one of the most beautiful and thoughtfully laid out books I’ve ever read. Deep-Fried Ravioli On a Stick Yield: 4 servingsPrep Time: 15 minCook Time: 10 min Ingredients:1 quart vegetable oil 1 cup all-purpose flour 2 eggs, beaten 1 cup plain bread crumbs ½ cup grated Parmesan cheese, divided 2 Tablespoons dried oregano 2 Tablespoons dried basil 1 Tablespoon dried thyme 2 teaspoons garlic powder 1 teaspoon salt ½ teaspoon pepper 12 store-bought ravioli (or 20 tortellini)Directions:Preheat vegetable oil in a large, heavy pot over medium-high heat.Place flour in one shallow dish and eggs in another.

Earth, Meet Your Long-Lost Sibling: The Christmas Planet It may sound like something from a very special episode of Doctor Who, but the Christmas planet is real. What's more, it's the most Earth-like world yet discovered. The planet, more properly known as Kepler 22-b, was revealed to the world Monday via a press conference at NASA Ames Research Center. So why call it the Christmas Planet? "It's a great gift," said William Borucki, the telescope's principal investigator, who came up with the seasonal name. Actually making our way to the Christmas Planet might take a little longer, however. But we do know it's about twice the size of Earth, and that the average surface temperature is a balmy 72 degrees Farenheit. How to Make Caramel Apple Shots | Food Republic - StumbleUpon Photo: Michelle Oddis Once in a while, a party trick comes along that grabs our attention. Food blogger Michelle Oddis of That's So Michelle loves making caramel apple shots we can't imagine anyone would turn down. Using, wait for it, real fruit and time-tested formulas for tasty, jiggly shots that stay put in their edible "shotglasses," Michelle's gotten Food Republic on the gimmicky Halloween bandwagon we've been resisting so fiercely. Try out these irresistible boozy apple treats (and don't hold your breath for a candy corn cocktail on our end). Here's what you'll need: 10 small granny smith apples 1 envelope knox gelatin 1/2 cup water 1/2 cup coconut milk 2 drops yellow food coloring 1 envelope Land 'o Lakes caramel hot chocolate (regular would do just fine if you can't find caramel) 1/4 cup sugar 1/2 cup butterscotch schnapps lemon juice Halve and hollow out apples, cutting them from the stem down using a melon baller or spoon. Cut halves in quarters and those quarters in half again.

Curvy in HTML5 Curvy is a HTML5 puzzle game using the canvas element. Just rotate the tiles so that like colors connect. Modernizr tells me you don't have canvas support in your browser. Sadly, this game uses technology that's only in browsers with HTML5 support. Presented to you by FlamingLunchbox is a puzzle, originally for Android phones, using a simple idea. Each Curvy puzzle consists of a grid of hexagonal tiles. Curvy allows a variety of different puzzle sizes, providing puzzles that can be quickly solved as well as more complex versions depending on the size you choose. Want it on Android? We are a participant in the Amazon Services LLC Associates Program, an affiliate advertising program designed to provide a means for us to earn fees by linking to Amazon.com and affiliated sites.

Scientists find monster black holes, biggest yet CAPE CANAVERAL, Fla. (AP) — Scientists have found the biggest black holes known to exist — each one 10 billion times the mass of our sun. A team led by astronomers at the University of California, Berkeley, discovered the two gigantic black holes in clusters of elliptical galaxies more than 300 million light years away. That's relatively close on the galactic scale. "They are monstrous," Berkeley astrophysicist Chung-Pei Ma told reporters. The previous black hole record-holder is as large as 6 billion suns. In research released Monday by the journal Nature, the scientists suggest these black holes may be the leftovers of quasars that crammed the early universe. The scientists used ground-based telescopes as well as the Hubble Space Telescope and Texas supercomputers, observing stars near the black holes and measuring the stellar velocities to uncover these vast, invisible regions. Black holes are objects so dense that nothing, not even light, can escape. Online: black holes