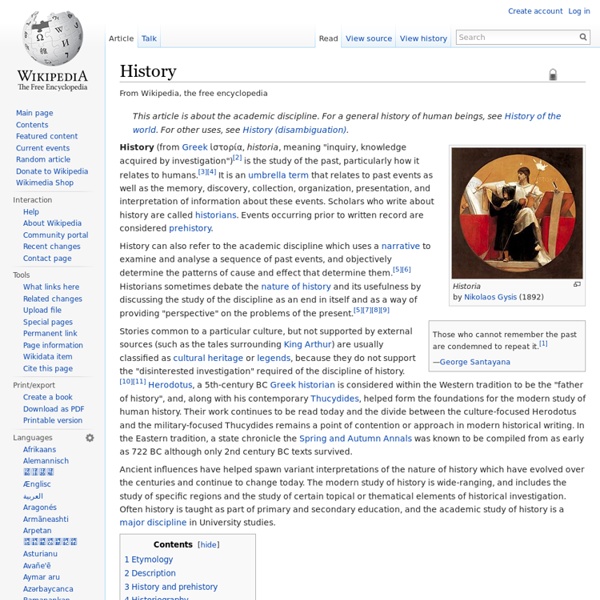 Those who cannot remember the past are condemned to repeat it.[1] History (from Greek ἱστορία, historia, meaning "inquiry, knowledge acquired by investigation")[2] is the study of the past, particularly how it relates to humans.[3][4] It is an umbrella term that relates to past events as well as the memory, discovery, collection, organization, presentation, and interpretation of information about these events. Scholars who write about history are called historians. Events occurring prior to written record are considered prehistory. History can also refer to the academic discipline which uses a narrative to examine and analyse a sequence of past events, and objectively determine the patterns of cause and effect that determine them.[5][6] Historians sometimes debate the nature of history and its usefulness by discussing the study of the discipline as an end in itself and as a way of providing "perspective" on the problems of the present.[5][7][8][9] Etymology Description Historiography

List of timelines From Wikipedia, the free encyclopedia This is a list of timelines currently on Wikipedia. §Types[edit] §General timelines[edit] §History[edit] §Arts[edit] Celts Diachronic distribution of Celtic peoples: core Hallstatt territory, by the 6th century BC maximal Celtic expansion, by 275 BC Lusitanian area of Iberia where Celtic presence is uncertain The Celts (/ˈkɛlts/, occasionally /ˈsɛlts/, see pronunciation of Celtic) or Kelts were an ethnolinguistic group of tribal societies in Iron Age and Medieval Europe who spoke Celtic languages and had a similar culture,[1] although the relationship between the ethnic, linguistic and cultural elements remains uncertain and controversial. The earliest undisputed direct examples of a Celtic language are the Lepontic inscriptions, beginning in the 6th century BC.[6] Continental Celtic languages are attested almost exclusively through inscriptions and place-names.