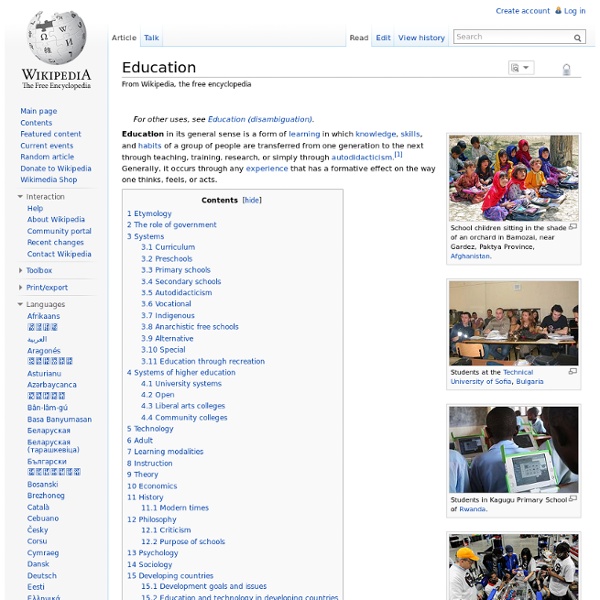 School children sitting in the shade of an orchard in Bamozai, near Gardez, Paktya Province, Afghanistan A right to education has been recognized by some governments. At the global level, Article 13 of the United Nations' 1966 International Covenant on Economic, Social and Cultural Rights recognizes the right of everyone to an education.[2] Although education is compulsory in most places up to a certain age, attendance at school often isn't, and a minority of parents choose home-schooling, e-learning or similar for their children. Etymology[edit] Etymologically, the word "education" is derived from the Latin ēducātiō ("A breeding, a bringing up, a rearing") from ēdūcō ("I educate, I train") which is related to the homonym ēdūcō ("I lead forth, I take out; I raise up, I erect") from ē- ("from, out of") and dūcō ("I lead, I conduct").[3] Education can take place in formal or informal educational settings. History[edit] Nalanda, ancient center for higher learning Formal education[edit] Related:  besas

Helsinki.fi - Helsingin seudun tapahtumat, uutiset ja hakupalvelut yhdestä osoitteesta Subculture In sociology, and cultural studies, a subculture is a group of people within a culture that differentiates themselves from the larger culture to which they belong. The term subculture has become deprecated among some researchers, who prefer the term co-culture, in order to avoid the connotations of inferiority associated with the "sub-" prefix.[1][2] While exact definitions vary, the Oxford English Dictionary defines the term as "a cultural group within a larger culture, often having beliefs or interests at variance with those of the larger culture."[3] Definition[edit] often negative relations to work (as 'idle', 'parasitic', at play or at leisure, etc.) Identifying subcultures[edit] The study of subcultures often consists of the study of symbolism attached to clothing, music and other visible affectations by members of subcultures, and also the ways in which these same symbols are interpreted by members of the dominant culture. Subcultures' relationships with mainstream culture[edit]

Zebible - communauté des jeunes lecteurs de la Bible Differential association In criminology, Differential Association is a theory developed by Edwin Sutherland proposing that through interaction with others, individuals learn the values, attitudes, techniques, and motives for criminal behavior. Differential association predicts that an individual will choose the criminal path when the balance of definitions for law-breaking exceeds those for law-abiding. This tendency will be reinforced if social association provides active people in the person's life. Earlier in life the individual comes under the influence of those of high status within that group, the more likely the individual to follow in their footsteps. This does not deny that there may be practical motives for crime. If a person is hungry but has no money, there is a temptations to steal. Sutherland's Theory of Differential Association[edit] The principles of Sutherland's Theory of Differential Association key points:[1] 1. 2. 3. 4. 5. 6. 7. 8. 9. Explanation[edit] Critique[edit] External links[edit]

Cesare Lombroso Cesare Lombroso (born Ezechia Marco Lombroso; Italian: [ˈtʃɛzare lombˈroso]; 6 November 1835 – 19 October 1909), was an Italian criminologist, physician, and founder of the Italian School of Positivist Criminology. Lombroso rejected the established Classical School, which held that crime was a characteristic trait of human nature. Instead, using concepts drawn from physiognomy, early eugenics, psychiatry and Social Darwinism, Lombroso's theory of anthropological criminology essentially stated that criminality was inherited, and that someone "born criminal" could be identified by physical defects, which confirmed a criminal as savage, or atavistic. Life[edit] Concept of criminal atavism[edit] Lombroso's general theory suggested that criminals are distinguished from noncriminals by multiple physical anomalies. Besides the "born criminal", Lombroso also described "criminaloids", or occasional criminals, criminals by passion, moral imbeciles, and criminal epileptics. Psychiatric art[edit]

Crime statistics Crime statistics attempt to provide statistical measures of crime committed in societies. Given that crime is usually secretive by nature, measurements of it are likely to be inaccurate. Several methods for measuring crime exist, including household surveys, hospital or insurance records, and compilations by police and similar law enforcement agencies. Typically official crime statistics are the latter, but some offences are likely to go unreported to the police. Statistics on crime are gathered and reported by many countries, They are of particular interest to several international organizations, including Interpol and the United Nations. Two major methods for collecting crime data are law enforcement reports, which only reflect reported crimes and victimization statistical surveys. The U.S. has two major data collection programs, the Uniform Crime Reports from the FBI and the National Crime Victimization Survey from the Bureau of Justice Statistics. Counting rules[edit] Surveys[edit]

Alcohol Ball-and-stick model of the hydroxyl (-OH) functional group in an alcohol molecule (R3COH). The three "R's" stand for carbon substituents or hydrogen atoms.[1] The hydroxyl (-OH) functional group with bond angle. An important class of alcohols are the simple acyclic alcohols, the general formula for which is CnH2n+1OH. Of these ethanol (C2H5OH) is the alcohol found in alcoholic beverages; in common speech the word alcohol refers to ethanol. Other alcohols are usually described with a clarifying adjective, as in isopropyl alcohol (propan-2-ol) or wood alcohol (methyl alcohol, or methanol). In everyday life "alcohol" without qualification usually refers to ethanol, or a beverage based on ethanol (as in the term "alcohol abuse"). Toxicity Ball-and-stick model of tert-Amyl alcohol, which is 20 times more intoxicating than ethanol and like all tertiary alcohols, cannot be metabolised to toxic aldehydes.[3][4][5] Treatment Nomenclature Systematic names Common names Alkyl chain variations in alcohols

Anthropological criminology History[edit] The physiognomist Johann Kaspar Lavater (1741–1801) was one of the first to suggest a link between facial figures and crime.[1] Victor Hugo referred to his work in Les Misérables, about what he would have said about Thénardier's face. Franz Joseph Gall then developed in 1810 his work on craniology, in which he alleged that crime was one of the behaviors organically controlled by a specific area of the brain. The philosopher Jacob Fries (1773–1843) also suggested a link between crime and physical appearance when he published a criminal anthropology handbook in 1820. The Italian school[edit] However, criminal anthropology per se refers to the Italian school of criminology, whose most famous member was Cesare Lombroso. Mugshot and fingerprinting[edit] On the other hand, Alphonse Bertillon (1853–1914) created a mugshot identification system for criminals prior to the invention of fingerprinting. Social Darwinism[edit] The theory[edit] Rejection[edit] Modern times[edit] See also[edit]