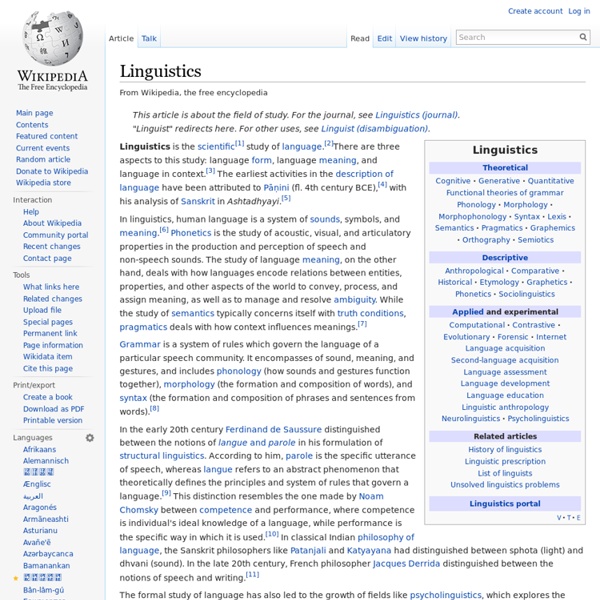 In the early 20th century Ferdinand de Saussure distinguished between the notions of langue and parole in his formulation of structural linguistics. According to him, parole is the specific utterance of speech, whereas langue refers to an abstract phenomenon that theoretically defines the principles and system of rules that govern a language.[9] This distinction resembles the one made by Noam Chomsky between competence and performance, where competence is individual's ideal knowledge of a language, while performance is the specific way in which it is used.[10] In classical Indian philosophy of language, the Sanskrit philosophers like Patanjali and Katyayana had distinguished between sphota (light) and dhvani (sound). In the late 20th century, French philosopher Jacques Derrida distinguished between the notions of speech and writing.[11] Nomenclature[edit] Variation and Universality[edit] Lexicon[edit] The lexicon is a catalogue of words and terms that are stored in a speaker's mind.

Related:  The Story of Human Language • The problems with philosophy • World Culture Project

Nordic Model Definition What Is the Nordic Model? The Nordic model is the combination of social welfare and economic systems adopted by Nordic countries. It combines features of capitalism, such as a market economy and economic efficiency, with social benefits, such as state pensions and income distribution. The Nordic model, also known as the Scandinavian model, is most commonly associated with the countries of Scandinavia: Sweden, Norway, Finland, Denmark, and Iceland.

Nordic art Nordic art is the art made in the Nordic countries: Denmark, Faroe Islands, Finland, Iceland, Norway, Sweden, and associated territories. Scandinavian art refers to a subset of Nordic art and is art specific for the Scandinavian countries Denmark, Sweden and Norway. Norse art, the art of the Vikings, is a form of Nordic art from a particular period of time. History[edit] Sweden: population by level of education 2019 Basic Account Get to know the platform You only have access to basic statistics.

Education in Scandinavia - statistics & facts Education generally follows the same trajectory in Scandinavian countries and is comprised of mandatory primary school time of nine or ten years, followed by optional upper secondary and higher education. Most schools and education institutions are public, and the vast majority of pupils and students are admitted in public institutions. Yet both the number of private schools and pupils in private schools increased over the past years. 5 Favorite Scandinavian Foods Traditionally, Scandinavian dishes are basic and many traditional meals include fish, potatoes, pork, and berries. Most Scandinavian cuisine relies on fresh, natural ingredients that can be found in the wild or that come fresh from the sea. On your trip to Denmark, Norway, Sweden, Iceland, or Finland, make sure to try at least one of these great Scandinavian dishes.

Outdoor Activities in the Nordic countries It is the largest region in Europe, but also the less populated region. The Region has a beautiful nature with a lot of fresh air, fantastic lights, beautiful glaciers, icebergs, rich fauna, unique fjords, hot springs, lakes, captivating beaches and several archipelagoes. Forget all about work, busy schedules and calendars - here the silence takes over. Hiking in Sweden In Sweden’s you will find nearly 400 hiking trails that criss-cross the country, clearly marked and dotted with 350 well-maintained hostels, mountain stations and huts. In Sweden, they have unique nature which invites to hiking. For decades developed walking routes have been created, which gives an opportunity to discover the incredible scenery that Sweden offers.