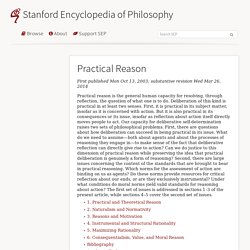 Practical and Theoretical Reason Practical reason defines a distinctive standpoint of reflection. When agents deliberate about action, they think about themselves and their situation in characteristic ways. What are some of the salient features of the practical point of view? A natural way to interpret this point of view is to contrast it with the standpoint of theoretical reason. Practical reason, by contrast, takes a distinctively normative question as its starting point. There is, however, a different way of understanding the contrast between practical and theoretical reason, stressing the parallels rather than the differences between the two forms of reflection. Theoretical reason, interpreted along these lines, addresses the considerations that recommend accepting particular claims as to what is or is not the case.

Two observations should be made about this way of understanding practical reason. Should we be afraid of virtual reality? From the Philosopher. Theorists have invented a special kind of metaphysical freedom, sending us up, like autonomous hot-air balloons, to a stratosphere beyond the reach of nature and science. . . 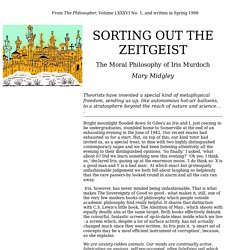 Bright moonlight flooded down St Giles's as Iris and I, just ceasing to be undergraduates, stumbled home to Somerville at the end of an exhausting evening in the June of 1942. Our recent exams had exhausted us for a start. But, on top of this, our kind tutor had invited us, as a special treat, to dine with two highly distinguished contemporary sages and we had been listening attentively all the evening to their distinguished opinions. 'So finally.' Moore, George Edward. G. 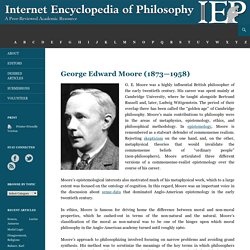 E. Moore was a highly influential British philosopher of the early twentieth century. His career was spent mainly at Cambridge University, where he taught alongside Bertrand Russell and, later, Ludwig Wittgenstein. The period of their overlap there has been called the “golden age” of Cambridge philosophy. Moore’s main contributions to philosophy were in the areas of metaphysics, epistemology, ethics, and philosophical methodology. Moore’s epistemological interests also motivated much of his metaphysical work, which to a large extent was focused on the ontology of cognition. In ethics, Moore is famous for driving home the difference between moral and non-moral properties, which he cashed-out in terms of the non-natural and the natural.

Moore’s approach to philosophizing involved focusing on narrow problems and avoiding grand synthesis. Moore also had a significant influence outside of academic philosophy, through his contacts in the Cambridge Apostles and the Bloomsbury group. Musing: Is Rule Utilitarianism Preferable to Act Utilitarianism? « The Oxford Philosopher. Holly Morgan University of Oxford Utilitarianism is a normative ethical theory which states that the morally right action is the one that maximises the balance of happiness over suffering. 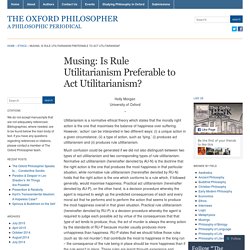 ShoaibiCUPR. Hume: Ethics. Hume: Morality and Religion Grounds for Morality Having examined the epistemological basis for Hume's naturalism, we are ready to consider its application to human conduct. 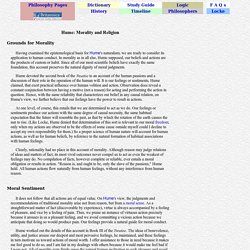 In morality as in all else, Hume supposed, our beliefs and actions are the products of custom or habit. Since all of our most scientific beliefs have exactly the same foundation, this account preserves the natural dignity of moral judgments. Hume devoted the second book of the Treatise to an account of the human passions and a discussion of their role in the operation of the human will. An Ethics of Global Responsibility: Supererogation and Responsibility. Although the term "supererogation" is not common in ordinary moral discourse, it is commonly used by moral philosophers to describe a class of moral actions which are familiar to most people. 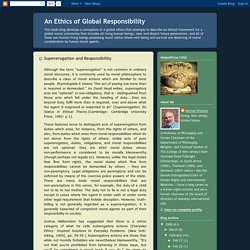 Etymologially it means "the act of paying out more than is required or demanded. " As David Heyd writes, superogatory acts are "optional" or non‑obligatory, that is ‑ distinguished from those acts which fall under the heading of duty....they are beyond duty, fulfil more than is required, over and above what the agent is supposed or expected to do" [Supererogation: Its Status in Ethical Theory. (Cambridge: Cambridge University Press, 1982: p.1]. These features serve to distinguish acts of supererogation from duties which arise, for instance, from the rights of others, and also, from duties which arise from moral responsibilities which do not derive from the rights of others. We can have responsibilities towards others which require us "pay out" more than can be demanded by others as their right. Williams. Williams. Musing: Is Rule Utilitarianism Preferable to Act Utilitarianism? « The Oxford Philosopher.

Philosophy – the Movies. Views: 3518 From a distance, it seems weird, irrelevant, boring and yet also – just a little – intriguing. 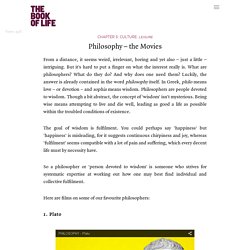 But it’s hard to put a finger on what the interest really is. What are philosophers? What do they do? And why does one need them? The goal of wisdom is fulfilment. So a philosopher or ‘person devoted to wisdom’ is someone who strives for systematic expertise at working out how one may best find individual and collective fulfilment. 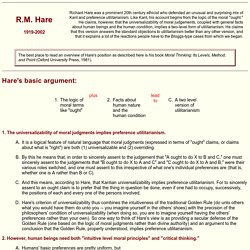 The universalizability of moral judgments implies preference utilitarianism. It is a logical feature of natural language that moral judgments (expressed in terms of "ought" claims, or claims about what is "right") are both (1) universalizable and (2) overriding. By this he means that, in order to sincerely assent to the judgement that "A ought to do X to B and C," one must sincerely assent to the judgements that "B ought to do X to A and C" and "C ought to do X to A and B," were their various roles switched, and one must assent to this irrespective of what one's individual preferences are (that is, whether one is A rather than B or C).