Holy Desire – MelissaBeeNaturalMagic. On this Valentine’s Day, ask yourself, what is your Holy Desire? 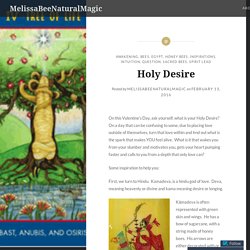 On a day that can be confusing to some, due to placing love outside of themselves, turn that love within and find out what is the spark that makes YOU feel alive. What is it that wakes you from your slumber and motivates you, gets your heart pumping faster and calls to you from a depth that only love can? Some inspiration to help you: First, we turn to Hindu. Kamadeva, is a hindu god of love. Kāmadeva is often represented with green skin and wings.

Kamadeva was turned to ash for his part in a plan to save the gods from a demon by waking Shiva. Who does this description also bring to mind, but Cupid or Eros, a winged boy with a bow and arrow known as the God of Love. To the Greeks, Cupid is thought to be born of Venus and Mars. Love once, roving through a bower, Plucked a rose, his favourite flower – Plucked a rose, but did not see Lurking in’t a sleeping bee” Nor did spy the wanton thing, Ere he felt its poisoned sting. Like this: The Buzzing of a Bee Priestess ~ Aphrodite Calling's Magical Musing. I started writing a children's story last year about a little Bee named Lee. 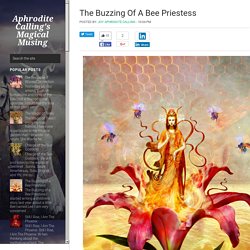 I am very concerned for humans, animals and Mother Earth if the number of bees keep disappearing. I can only hope for change, the story is about hope. Starmonkiesbigpic's Blog. Jesus told his disciples they had the Authority over demons and to trample on Snakes & Scorpions! 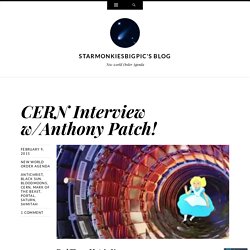 A Thousand Years! Imagine living for 1000 years! What would the cultures be like throughout that length of time. Just in the short time I’ve lived compared to 1000 yrs a lot has changed like music, fashion, environment, development in cities and in countries! 10 Generations Imagine! 4004 BC According to the bible around 4004 BC Adam was created by God. Neith. Neith (/neɪθ/ or /niːθ/; also spelled Nit, Net, or Neit) was an early goddess in the Egyptian pantheon. 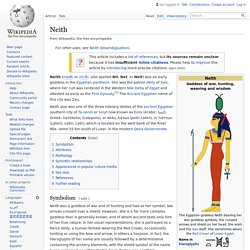 She was the patron deity of Sais, where her cult was centered in the Western Nile Delta of Egypt and attested as early as the First Dynasty.[1] The Ancient Egyptian name of this city was Zau. Neith also was one of the three tutelary deities of the ancient Egyptian southern city of Ta-senet or Iunyt now known as Esna (Arabic: إسنا), Greek: Λατόπολις (Latopolis), or πόλις Λάτων (polis Laton), or Λάττων (Laton); Latin: Lato), which is located on the west bank of the River Nile, some 55 km south of Luxor, in the modern Qena Governorate. Symbolism[edit] Neith was a goddess of war and of hunting and had as her symbol, two arrows crossed over a shield. Earth Connection & Healing the Bees by Jassy Watson. Friday Fun Facts - Ancient Bee History - The Orange Bee.

Stargazing Events 2013 & Beyond. Melody Ables helpful information regarding 13 Stargazing Events for 2013 — Listed In Chronological Order:- 1) January 21 — Very Close Moon/Jupiter Conjunction A waxing gibbous moon (78% illuminated) will pass within less than a degree to the south of Jupiter high in the evening sky. 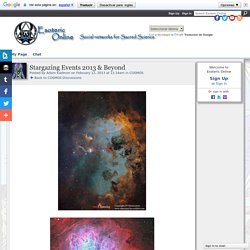 Your closed fist held out at arms length covers 10 degrees. These two wont get that close again until 2026. 2) February 2-23 — Best Evening View of Mercury The planet Mercury will be far enough away from the glare of the Sun to be visible in the Western sky after sunset. 3) March 10-24 — Comet PANSTARRS at its best First discovered in 2011, this comet should be coming back around for about 2 weeks. 4) April 25 — Partial Lunar Eclipse. Stone Age farmers feasted on honey and used wax to waterproof pots 9,000 years ago. They are pictured in Egyptian murals and even prehistoric rock art. 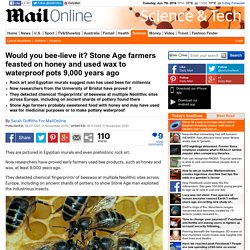 Now researchers have proved early farmers used bee products, such as honey and wax, at least 9,000 years ago. They detected chemical 'fingerprints' of beeswax at multiple Neolithic sites across Europe, including on ancient shards of pottery, to show Stone Age man exploited the industrious insects. Researchers have proved early farmers exploited bee products, such as honey, at least 9,000 years ago. Ancient History Blog. The Sweet History of Honey When archaeologists opened an 18th Dynasty Egyptian tomb in the Valley of the Kings, they made a startling discovery. 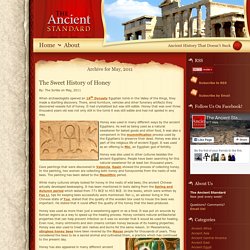 Popular Archaeology Article 3. Part 3: The race between the light and dark sides of the moon on the Phaistos gameboard.By Victoria Shockley and Peter Aleff Sat, Jun 01, 2013 Summary: The part of the path opposite the "north pole" on the board was logically the ecliptic where sun and moon travel across the sky. 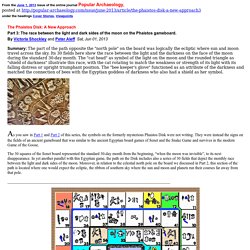 Articles_Bee2. By ANDREW GOUGH July 2008 The remarkable service that Bees provide as pollinators of plants and trees and producers of life-affirming nectar has largely been taken for granted. 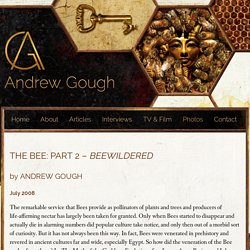 Only when Bees started to disappear and actually die in alarming numbers did popular culture take notice, and only then out of a morbid sort of curiosity. But it has not always been this way. In fact, Bees were venerated in prehistory and revered in ancient cultures far and wide, especially Egypt. Articles_Bee1. By ANDREW GOUGH June 2008 History is rife with lost knowledge and traditions whose meaning has blurred with the passage of time. 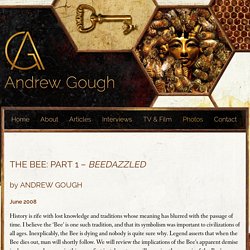