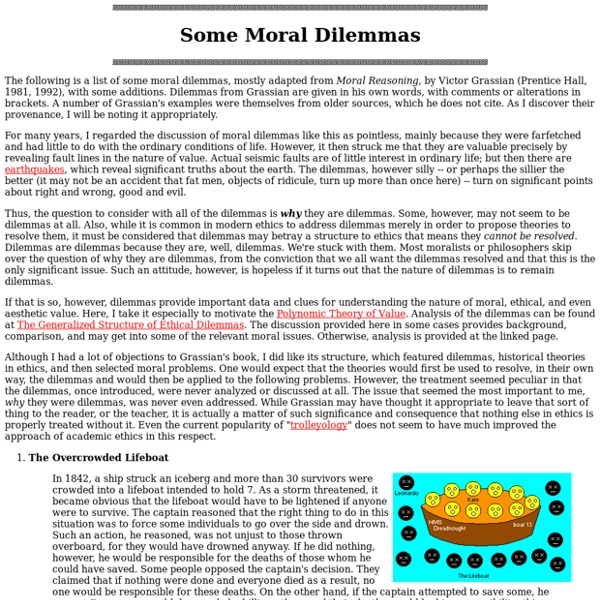 The Trolley Problem, not in Grassian. Suggested by Philippa Foot (1920-2010), daughter of Esther, the daughter of President Grover Cleveland, but of British birth because of her father, William Sidney Bence Bosanquet. A trolley is running out of control down a track. In its path are five people who have been tied to the track by a mad philosopher. Fortunately, you could flip a switch, which will lead the trolley down a different track to safety. Unfortunately, there is a single person tied to that track. This is a classic "right vs. good" dilemma. The Costly Underwater Tunnel Compare: 112 men were killed during the construction of Hoover Dam on the Nevada-Arizona border (the "official" number was 98, but others had died from causes more difficult to identify -- or easier to ignore -- like by carbon monoxide poisoning): The first to die was a surveyor, J.G.

Future - The greatest long-term threats facing humanity Can we actually say anything about the far future? If we can’t predict when it will rain next month, forecasting billions of years hence might seem impossible. However, not everything is as chaotic as the weather: even predictions very far ahead are sometimes possible, especially in astrophysics and cosmology. We can be confident that there will be a total solar eclipse in the UK on 23 September 2090 because the Moon, Sun and Earth move in stable, predictable orbits with very minor disturbances, and the laws of gravity are now well-tested. Similarly, we can use known astrophysics to predict what will likely happen across the Universe as it expands. You might also like:

Morality as Secular Mark S. Halfon, (2004, Nassau Community College) That there is a difference between religion and morality is uncontroversial. How, then, can atheism be interpreted as a moral alternative? "The Mind as the Software of the Brain" by Ned Block Ned BlockNew York University 1. Machine Intelligence 2. Internet capitalism pits fast technology against slow democracy Technology-driven changes—like those we are presently experiencing—produce demands for security and stability that pose a threat to liberal democracy and capitalism. Across the world, autocrats are on the rise because they claim they can deliver answers; symbols such as Brexit or the Wall pose as solutions; and old economic “isms” are reborn as “new” solutions. This is not a unique experience; our struggles in the information age echo similar struggles in the industrial age.

English 50 Exercises for Story Writers English 50 – Intro to Creative Writing: Exercises for Story Writers Basic Theory: What is a short story? As soon as someone delivers a definition, some good writer will write a story that proves the theory wrong. About the only thing we can say for sure is that short stories are short and that they are written in what we call prose. Some attributes, however, seem to show up more often than not.