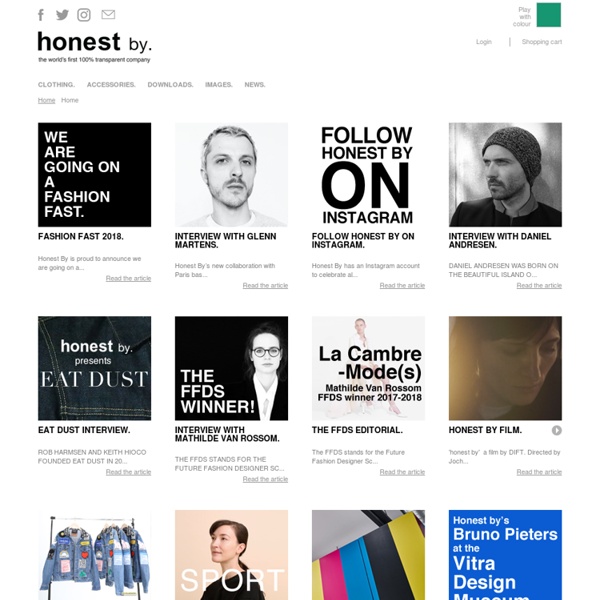 War on waste: Clothes swap and eco-styling workshops fighting the scourge of fast fashion Posted It's a Sunday morning in a bright, airy space at a Canberra hotel and dozens of women are rifling through clothing racks and choosing their favourite pieces. The dresses, skirts, tops and jackets are all good quality and all pre-loved. And the women — some op shop veterans, some novices — are all warriors in the war against fast fashion. Fast fashion is the term that describes the quick turnover of trendy, cheaply made clothing that often ends up in landfill. "The reason we do these clothes swaps is not only to have fun and tszuj up our wardrobes," said Nina Gbor, eco-stylist and event organiser.

Three killed in Bangladesh textile factory fire Posted A fire in a textile factory in Bangladesh has killed three workers and left five injured, police say, in the latest incident to cast a spotlight on the country's hazardous garment industry. Key points: At least three workers are dead after fire engulfs fabric manufacturer outside DhakaFire and accidents are common in Bangladesh's billion-dollar garment industryAccidents have declined since global brands and government pursued safety reforms A Pakistani technician was among those killed in the blaze in the sprawling complex belonging to fabric manufacturer Mom Tex in Narsingdi, just outside the capital Dhaka. Police officials said the fire started on the ground floor of a seven-storey building where chemicals and dyes were stored, trapping workers who were resting before their shift.

Rise of clothes swapping helps make a small dent in the war on fashion waste Posted Despite working in retail, Annelie Child decided that this year she was no longer going to buy new clothes. Instead, she plans to only buy pre-loved or recycled wear by joining in the increasingly popular and frequent clothes-swapping events popping up around Sydney and around the country. "I've got an amazing wardrobe already, I don't really need anything else and I'm trying to back away from the fast fashion, buying news — there's no need," Ms Child said.

Hundreds of Bangladeshi factories to shut indefinitely Updated Hundreds of Bangladesh garment factories will be closed indefinitely in the wake of a building collapse that killed more than 1,100 people. Rescuers are wrapping up the search for bodies in the rubble of the collapsed Rana Plaza complex on the outskirts of the capital. War on waste: Recycling denim into paper and fostering social inclusion in the process Posted In a small studio in Canberra, artisans are recycling unwanted denim jeans and jackets by turning them into paper. Paperworks is a not-for-profit social enterprise that uses the art of papermaking to engage marginalised people and those with special needs. "We were using cardboard and recycled paper in the first few sessions but it was unforgiving and had lacklustre results," chief executive Susanna Pieterse said.

More than 45 million people trapped in modern slavery with two-thirds in Asia-Pacific region, report finds Updated More than 45 million people are living as modern slaves around the world, according to the 2016 Global Slavery Index, with two-thirds reported in the Asia-Pacific region. Key points: India, North Korea reported as key offendersAustralia listed among countries taking most action to tackle modern slaveryResearcher says new report takes into consideration all forms of slavery The index, by human rights group Walk Free Foundation, increased its estimate of people born into servitude, trafficked for sex work, or trapped in debt bondage or forced labour to 45.8 million from 35.8 million in 2014.

Australian fashion companies fail to disclose supply chain, risk worker exploitation, report says Updated Australian companies such as Oroton and Seed have been criticised for failing to publicly disclose where they source their clothes from. Key points Garment industry employs more than 40 million people in Asia PacificMany Australian fashion companies still don't know suppliers and where the raw materials come fromReport shows improvements since the 2013 Rana Plaza building collapse in Bangladesh Two reports, authored by Baptist World Aid and Oxfam, and obtained by 7.30, disclose which companies have knowledge of their complex supply chain. Oroton was graded a "D", while Seed, Best and Less and Lorna Jane were graded an "F" by the report.

How our glitter obsession is wrecking the environment Glitter is getting more and more popular by the day – illuminating Instagram and Facebook as it becomes the must-have finishing touch on looks for festivals, parties, and Pride. We’ve seen it used as makeup, dusted onto hair, and even slathered over beards (how could we forget that trend?!). Man slams bosses for telling him to take off his makeup at work How to shop ethically and still look on point - Hack - triple j Three years after the deadliest accident in the fashion industry some of Australia’s top brands are still failing to source their clothes ethically, according to a new report on the industry. Baptist World Aid’s Australian Fashion Report has rated 87 companies and graded them from A to F, with brands like General Pants and Lorna Jane scoring amongst the worst. However, the report shows the industry has worked hard to improve their standards since the Rana Plaza factory collapse in three years ago, killing 1,136 clothing workers. The Australian Fashion Report looked at the traceability and transparency of a label’s supply chain and what their workers are paid. So, what can you do to make your wardrobe more ethical and environmentally friendly?