How social media took us from Tahrir Square to Donald Trump. 1. 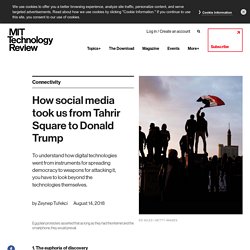 The euphoria of discovery As the Arab Spring convulsed the Middle East in 2011 and authoritarian leaders toppled one after another, I traveled the region to try to understand the role that technology was playing. Bloomberg Is Building a Data Organization to Crush Trump. Much of the thinking is informed by Bloomberg’s experience in the 2018 midterms, when he spent more than $100 million to become the single biggest Democratic donor, winning in 21 of the 24 races where his Independence USA PAC got directly involved. 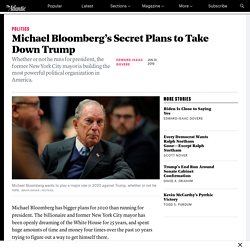 This may yet turn into an effort on behalf of a Bloomberg campaign, with his advisers carefully watching Biden’s moves to help them decide what to do. They doubt there’s room in the Democratic field for both. The two have been allies, particularly on gun control, and hold similar positions to the center of many of the more progressive Democrats running. They are also both white men in their mid-70s, seen as figures of the establishment. Cognitive bias cheat sheet. Minority rules: Scientists discover tipping point for the spread of ideas. Scientists at Rensselaer Polytechnic Institute have found that when just 10 percent of the population holds an unshakable belief, their belief will always be adopted by the majority of the society. 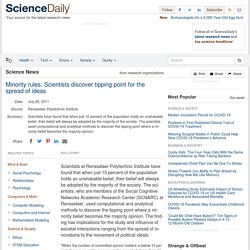 The scientists, who are members of the Social Cognitive Networks Academic Research Center (SCNARC) at Rensselaer, used computational and analytical methods to discover the tipping point where a minority belief becomes the majority opinion. The finding has implications for the study and influence of societal interactions ranging from the spread of innovations to the movement of political ideals. "When the number of committed opinion holders is below 10 percent, there is no visible progress in the spread of ideas. Minority Rules: Scientists Discover Tipping Point for the Spread of Ideas. About — Deon. Deon is a command line tool that allows you to easily add an ethics checklist to your data science projects. 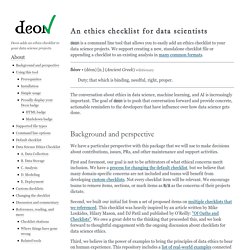 We support creating a new, standalone checklist file or appending a checklist to an existing analysis in many common formats. δέον • (déon) [n.] The Death of the Data Scientist. How the Enlightenment Ends. Heretofore confined to specific fields of activity, AI research now seeks to bring about a “generally intelligent” AI capable of executing tasks in multiple fields. A growing percentage of human activity will, within a measurable time period, be driven by AI algorithms. But these algorithms, being mathematical interpretations of observed data, do not explain the underlying reality that produces them. Paradoxically, as the world becomes more transparent, it will also become increasingly mysterious. What will distinguish that new world from the one we have known?

Skills for a Lifetime  ·  Along Middle Path  ·  Kenyon College. From Kenyon News - May 19, 2018 Editor’s note: The following is the prepared text of the address delivered by statistician and writer Nate Silver H’18 at Kenyon’s 190th Commencement on May 19, 2018. 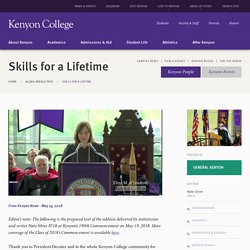 More coverage of the Class of 2018’s Commencement is available here. Thank you to President Decatur and to the whole Kenyon College community for having me here today and for giving me this honorary degree and this opportunity to speak with you. It’s a really wonderful honor and something I’ll always cherish. And more importantly … congratulations to the 420 students who are graduating today! Most GDPR emails unnecessary and some illegal, say experts. The vast majority of emails flooding inboxes across Europe from companies asking for consent to keep recipients on their mailing list are unnecessary and some may be illegal, privacy experts have said, as new rules over data privacy come into force at the end of this week. 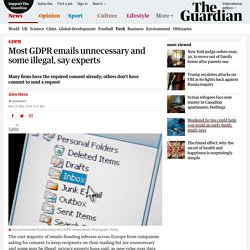 Many companies, acting based on poor legal advice, a fear of fines of up to €20m (£17.5m) and a lack of good examples to follow, have taken what they see as the safest option for hewing to the General Data Protection Regulation (GDPR): asking customers to renew their consent for marketing communications and data processing. But Toni Vitale, the head of regulation, data and information at the law firm Winckworth Sherwood, said many of those requests would be needless paperwork, and some that were not would be illegal. 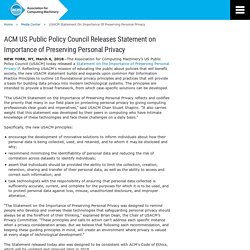 Reflecting USACM’s mission of educating the public about policies that will benefit society, the new USACM statement builds and expands upon common Fair Information Practice Principles to outline 10 foundational privacy principles and practices that will provide a basis for building data privacy into modern technological systems. The principles are intended to provide a broad framework, from which case-specific solutions can be developed.

Specifically, the new USACM principles: “The Statement on the Importance of Preserving Personal Privacy was designed to remind people who develop and oversee these technologies that safeguarding personal privacy should always be at the forefront of their thinking,” explained Brian Dean, the Chair of USACM’s Privacy Committee. This Israeli Presentation on How to Make Drone Strikes More “Efficient” Disturbed Its Audience. Research backed by the U.S. and Israeli military scandalized a conference near Tel Aviv earlier this year after a presentation showed how the findings would help drone operators more easily locate people — including targets — fleeing their strikes and better navigate areas rendered unrecognizable by prior destruction. 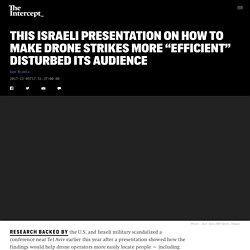 The doctoral student who presented the research demonstrated how pioneering data visualization techniques could show a drone operator, using lines and arrows of varying thickness, which direction fast-moving people and vehicles were most likely to travel, for example, at an intersection or while fleeing a building.

The presentation clearly angered at least some of the crowd, including the moderator, prompting hostile questions. “The guy’s talk (and its video documentation) revealed much of what’s very wrong about UAV warfare,” said Mushon Zer-Aviv, a web designer and activist and an organizer of the conference, the data visualization confab known as ISVIS. Can we really trust the Gartner Magic Quadrant? Add to favorites Can we really trust Gartner when their primary goal is to sell research, consultancy and events? 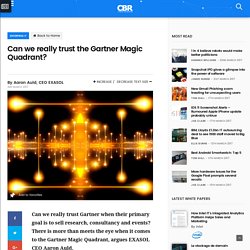 There is more than meets the eye when it comes to the Gartner Magic Quadrant, argues EXASOL CEO Aaron Auld. Run a quick search for Magic Quadrant and you’ll find a huge number of press releases from vendors telling the world about their latest position. Leader, challenger, visionary or niche; whatever the placing it’s worth a press release. Big data’s power is terrifying. That could be good news for democracy. Has a digital coup begun? 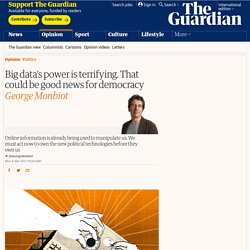 Is big data being used, in the US and the UK, to create personalised political advertising, to bypass our rational minds and alter the way we vote? The short answer is probably not. Or not yet. A series of terrifying articles suggests that a company called Cambridge Analytica helped to swing both the US election and the EU referendum by mining data from Facebook and using it to predict people’s personalities, then tailoring advertising to their psychological profiles. Will Democracy Survive Big Data and Artificial Intelligence? Editor’s Note: This article first appeared in Spektrum der Wissenschaft, Scientific American’s sister publication, as “Digitale Demokratie statt Datendiktatur.” “Enlightenment is man’s emergence from his self-imposed immaturity. Immaturity is the inability to use one’s understanding without guidance from another.” —Immanuel Kant, “What is Enlightenment?” (1784) How statistics lost their power – and why we should fear what comes next. In theory, statistics should help settle arguments.

They ought to provide stable reference points that everyone – no matter what their politics – can agree on. Yet in recent years, divergent levels of trust in statistics has become one of the key schisms that have opened up in western liberal democracies. Shortly before the November presidential election, a study in the US discovered that 68% of Trump supporters distrusted the economic data published by the federal government. Data Humanism, the Revolution will be Visualized. – giorgia lupi – Medium.

A dataset might lead to many stories. Data is a tool that filters reality in a highly subjective way, and from quantity, we can get closer to quality. Data, with its unique power to abstract the world, can help us understand it according to relevant factors. How a dataset is collected and the information included — and omitted — directly determines the course of its life. Rethinking Informed Consent in the Digital Age. November 2, 2016 by Linda Raftree This post is co-authored by Emily Tomkys, Oxfam GB; Danna Ingleton, Amnesty International; and me (Linda Raftree, Independent) At the MERL Tech conference in DC this month, we ran a breakout session on rethinking consent in the digital age.

Most INGOs have not updated their consent forms and policies for many years, yet the growing use of technology in our work, for many different purposes, raises many questions and insecurities that are difficult to address. Our old ways of requesting and managing consent need to be modernized to meet the new realities of digital data and the changing nature of data. Is informed consent even possible when data is digital and/or opened? Developing and operationalizing Responsible Data Policies. Rethinking Informed Consent in the Digital Age. Artificial Intelligence’s White Guy Problem. Council for Big Data, Ethics, and Society.

Seeing the Error of Your Ways. To scrape or not to scrape: technical and ethical challenges of collecting data off the web. The Trials and Tribulations of Data Visualization for Good.