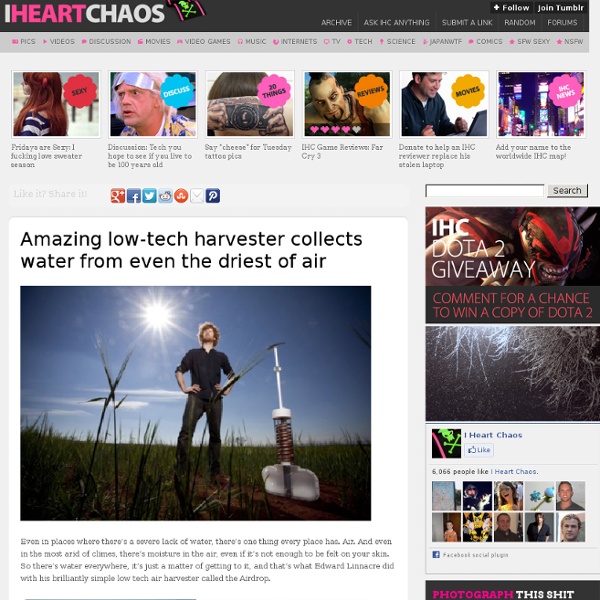 Even in places where there’s a severe lack of water, there’s one thing every place has. Air. And even in the most arid of climes, there’s moisture in the air, even if it’s not enough to be felt on your skin. So there’s water everywhere, it’s just a matter of getting to it, and that’s what Edward Linnacre did with his brilliantly simple low tech air harvester called the Airdrop. With a deceptively modest design, Airdrop filters hot environmental air through a turbine, feeding it through a copper tubing system—with copper wool to maximize surface area—and into the earth where it cools and releases moisture. The dry air is then re-released into the atmosphere and the collected water pumped through semi-porous hoses to the plant roots. Okay, that’s just genius and badass. Via

How To Build A Solar-Powered Still To Purify Drinking Water The author’s solar still, with one pan in it. The still actually has room for two of these. Note that the glass top is at an angle, allowing the water to flow down to the catch tube. Everyone agrees that water is needed for survival and articles abound for how to find water and purify it for drinking. 101 Facts That Should Make You Hopeful About the Future of Food This week, Food Tank is highlighting stories of hope, innovation and success, in creating a better food system. From women’s land access in Chad and urban green spaces in Australia to chefs in the United Kingdom and the U.S. implementing local, sustainable food sourcing—there are hundreds of innovations giving us hope about the future of food. Food Tank is featuring 101 bright spots in the food system that we hope will inspire eaters, businesses, researchers, scientists, funders, donors and policy makers to create—and support—a more sustainable food system. 1. Biologist Roger Leakey’s book, Tree of Life, highlights the ability of trees to help feed the planet. Through agroforestry—growing trees along with crops—communities can increase crop productivity and overcome global hunger and poverty, contributing to the livelihoods of more than 1.6 billion people.

Coles shopper cuts open red capsicum to discover family of caterpillars The red capsicum purchased from Kurralta Park Coles in South Australia. Photo: Facebook It's The Very Hungry Caterpillar – the sequel. A shopper made a not so tasty discovery after buying fruit and veg at a Coles in South Australia, unearthing a family of caterpillars after chopping open a red capsicum. The Complete Guide to Not Giving a Fuck Ok, I have a confession to make. I have spent almost my whole life– 31 years– caring far too much about offending people, worrying if I’m cool enough for them, or asking myself if they are judging me. I can’t take it anymore. It’s stupid, and it’s not good for my well being.

Portable Solar Desalination 'Plant' That May Aid In Third World Water Woes By Meera Dolasia on September 14, 2012 CCSSNAS-1NCSS-3Word Search 'Water, Water everywhere, not a drop to drink' - That, unfortunately, is the situation faced by millions of residents in developing countries who are surrounded by oceans, but have no access to fresh drinking water. Now thanks to this ingenious portable ceramic desalination 'plant' created by Milan-based designer Gabriele Diamanti, there may be a viable solution. The Eliodomestico works just like a coffee percolator except, upside down. Charge your cellphone with a Plant!! Who hasn’t been in a situation where they really need to use their phone to find any address or make an important call only to find out it turned off because it didn’t have any more battery. With the irruption of smartphones, mobile internet and all the apps that we constantly use, the cellphone battery doesn’t exceed the 8 hours duration. A similar situation was the kick-off for an idea that can change our energy sources and be a real step forward for the World Science. “You ran out of battery again?

Right of reply: Monsanto responds to the Undercurrent video Last week the Guardian published a video called “Why are we being fed by a poison expert: Monsanto and Roundup” on its news website, under the science and agriculture banner. While the video was at times humorous, the content contained errors regarding Monsanto, the ethics of our people and the safety of our products. Some of the statements made in this video are incorrect and damaging not just to Monsanto, but to farmers and the important role they play in feeding and clothing the world’s rapidly growing population. Although there are several inaccuracies that we think deserve to be corrected, I want to directly address a couple of the most inaccurate claims made by this video.

12 Things That The Mainstream Media Is Being Strangely Quiet About Right Now As the mainstream media continues to be obsessed with Anthony Weiner and his bizarre adventures on Twitter, much more serious events are happening around the world that are getting very little attention. In America today, if the mainstream media does not cover something it is almost as if it never happened. Right now, the worst nuclear disaster in human history continues to unfold in Japan , U.S. nuclear facilities are being threatened by flood waters, the U.S. military is bombing Yemen, gigantic cracks in the earth are appearing all over the globe and the largest wildfire in Arizona history is causing immense devastation. But Anthony Weiner, Bristol Palin and Miss USA are what the mainstream media want to tell us about and most Americans are buying it. In times like these, it is more important than ever to think for ourselves. The corporate-owned mainstream media is not interested in looking out for us.

DIY Solar Still How To Make Your Own Distilled Water Make your own distilled water from stream or lake water, salt water, or even brackish, dirty water, using these DIY Solar Still Plans. With just a few basic building materials, a sheet of glass and some sunshine, you can purify your own water at no cost and with minimal effort. This Glass Sphere Might Revolutionize Solar Power on Earth German architect André Broessel, of Rawlemon, has looked into his crystal ball and seen the future of renewable energy. In this case it’s a spherical sun-tracking solar energy-generating globe — essentially a giant glass marble on a robotic steel frame. But this marble is no toy. It concentrates both sunlight and moonlight up to 10,000 times — making its solar harvesting capabilities 35 percent more efficient than conventional dual-axis photovoltaic designs.

Department of Agriculture 5.1 Maintaining food security in Australia ​​​​​​Food security encompasses various factors that shape the food supply for individuals, families and communities. While there are many definitions of food security the Food and Agriculture Organization of the United Nations defines food security as: when all people at all times have physical and economic access to sufficient, safe, and nutritious food to meet their dietary needs and food preferences for an active and healthy life (FAO 2009). In Australia we are in the enviable position of having adequate quantities of high–quality food to feed our population. Australia’s food is supplied through domestic production and imports.

Monroe Techniques For Astral Projection Anon Note: After having studied many methods of Astral Projection, I have found that this is the easiest to do. Monroe teaches these techniques in a week, but they can be easily done in a day, with proper devotion. Solar Water Still Construction You can use stills in various areas of the world. They draw moisture from the ground and from plant material. You need certain materials to build a still, and you need time to let it collect the water. It takes about 24 hours to get 0.5 to 1 liter of water. Aboveground Still To make the aboveground still, you need a sunny slope on which to place the still, a clear plastic bag, green leafy vegetation, and a small rock (Figure 6-6). Seed Balls Take The Hard Work Out Of Planting Gardening is a pleasure for many people, but others find it something of a chore. If you fall into the latter camp, try creating seed balls for easy growing with minimal ground preparation. By coating seeds in clay, soil and fertiliser, seeds can easily establish in areas that are considered difficult or impossible to prepare. The ancient technique is attributed by the Permaculture Research Institute to Japanese farmer Masanobu Fukuoka. Over on Heavy Petal, Andrea Bellamy shows how to create these simple balls that can be packed with your favourite seeds — all that’s needed is some red clay and some compost mixed with the seeds you want to grow and some water. Seed balls are great for reclaiming derelict areas with thin or poor soil, making them ideal tools for guerrilla gardening.