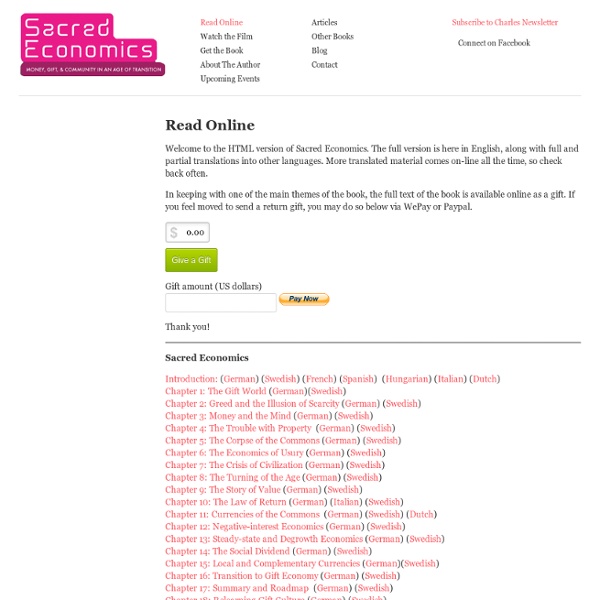 Beyond Growth: The Economics of Sustainable Development - Herman E. Daly - Google Books 37 ways to join the Gift Economy You don't have to participate in a local currency or service exchange to be part of the cooperative gift economy. Any time you do a favor for a family member, neighbor, colleague, or stranger you're part of it. Here are some ways you can spend time in the gift economy, where you'll find fun, freedom, and connection. posted Jun 30, 1997 Start a dinner co-op. This article was published in the Spring 1997 issue of YES! Comment on this articleHow to add a comment – Commenting Policy

Exploring The Mastermind Technique For Goal Accomplishment Author and personal development coach Steve Barnes begins a series of posts discussing the “Mastermind” concept–a technique of gathering and consolidating resources necessary for attaining goals. He starts off with describing a very cool NLP/visualization exercise he did with his daughter to help her overcome a performance block. “The mastermind is the only known means of overcoming a lack of ability.”–Napoleon Hill.A critical concept, whether we look at an individual, a couple, or a crowd. Whether the goals are internal or external, whether they are artistic, commercial or spiritual.This is so critical that I want to concentrate my thoughts here for a while. The primary definition of a “Mastermind” is: two or more people working together in a spirit of perfect harmony to support shared or separate goals.Let’s relate it simply to the first basic levels: An individual.The Eriksonian “Parts Party” is designed to create alignment between the different aspects of our personality.

First the Seed The Political Economy of Plant Biotechnology Jack Ralph Kloppenburg, Jr. Publication Year: 2004 First the Seed spotlights the history of plant breeding and shows how efforts to control the seed have shaped the emergence of the agricultural biotechnology industry. 1988 Cloth, 1990 Paperback, Cambridge University PressWinner of the Theodore Saloutos Award of the Agricultural History SocietyWinner of the Robert K. Published by: University of Wisconsin Press Preface to the second edition Download PDF (26.5 KB) pp. xiii-xiv Sixteen years after the initial publication of First the Seed, I am presented with the opportunity to revisit my work and evaluate it against the backdrop of subsequent events. Preface to the first edition Download PDF (268.4 KB) pp. xv-xviii It is only March 8, but I planted today. Acknowledgments Download PDF (94.3 KB) pp. xix-xx It is with mingled senses of relief and pleasure that I complete tis book. 1. Download PDF (1.3 MB) pp. 1-18 2. Download PDF (2.1 MB) pp. 19-49 3.

The Way Up is Down (by Charles Eisenstein) | Guest posts by Charles Eisenstein (Article from Watkins’ Mind Body Spirit magazine, issue 29, February 2012) Something is happening to us. Trying to make sense of their awakening experiences, people troll the Internet and discover the idea of “ascension” – the doctrine that humanity is on the verge of a process of spiritualization, a transition to a higher, and less material, dimension. Implicit in the term is the concept of rising above. Rising above what, may we ask? When did rising above become something to aspire to? The concept has deep roots indeed, as old as civilization (though less old than humanity). All of this was original to agricultural civilizations. SACRED ECONOMICS: Money, Gift, and Society in the Age of Transition by Charles Eisenstein, paperback (496 pages). And so was born the ambition to conquer and transcend nature. Why is rising above a good thing? Perhaps what we need is not the transcendence of materiality, but to embrace it more fully. Charles Eisenstein

The Praxis, by Dirk Bruere (Book Review) I have known Dirk Bruere online for many years, but I only met him in person a few weeks ago in London. He came to my talk on Turing Church unlimited - Transhumanist Religions 2.0, on July 14 in London, and gave me a copy of his book The Praxis. The official description: Immortality in the multiverse, The Artilect Messiahs, The end of death and suffering, Humans into Gods, The rise of the unreal, Raising the dead, Apocalypse and Judgment Day, The validation of religion, … and what we must do about it. Dirk’s thinking has many of the features of a religion, but he prefers to use the ancient Greek word Praxis, meaning the practical application of a philosophy. Dirk’s book has two very important merits: it is short (you can read it cover to cover in a couple of hours), and it is written in clear and simple English. Dirk’s universe is the same as mine. Dirk has taken the time to write down his, our ideas, in a book, and a very good one. From the Introduction:

Silent Spring Silent Spring is an environmental science book written by Rachel Carson and published by Houghton Mifflin on September 27, 1962.[1] The book documented the detrimental effects on the environment—particularly on birds—of the indiscriminate use of pesticides. Carson accused the chemical industry of spreading disinformation and public officials of accepting industry claims unquestioningly. In the late 1950s, Carson turned her attention to conservation, especially environmental problems that she believed were caused by synthetic pesticides. The result was Silent Spring (1962), which brought environmental concerns to the American public. Silent Spring was met with fierce opposition by chemical companies, but it spurred a reversal in national pesticide policy, led to a nationwide ban on DDT for agricultural uses,[2] and inspired an environmental movement that led to the creation of the U.S. Environmental Protection Agency.[3][4] Research and writing[edit] Content[edit]

Sacred Economics | Charles Eisenstein | Money, Gift and Society in the Age of Transition. Nature’s matrix: Linking agriculture, conservation and food sovereignty An important book argues that conservationists who focus on creating nature preserves are undermining their own cause. To truly protect biodiversity, environmentalists must support the global struggle of peasant farmers for human rights, land, and sustainable agriculture. NATURE’S MATRIX Linking Agriculture, Conservation and Food Sovereignty by Ivette Perfecto,John Vandermeer,and Angus Wright Earthscan, 2009 reviewed by Ian Angus In any discussion of biodiversity and species extinction, someone insists that overpopulation is the problem. For a convincing antidote to such views, I highly recommend Nature’s Matrix, an important book by ecologists Ivette Perfecto, John Vandermeer and Angus Wright. The issue is not how many people there are, but what the people do: some forms of agriculture destroy life, others preserve and expand it. A doomed strategy “On the reserves purchased through donations to the Trust, which are expertly managed by its overseas partners, permanent protection is in place.

Writing of the Dakinis