Howtoplaypiano.ca. Q: When were you born? 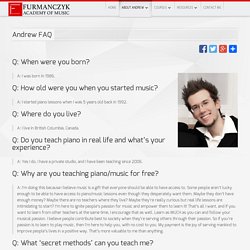 A: I was born in 1986. Q: How old were you when you started music? A: I started piano lessons when I was 5 years old back in 1992. Q: Where do you live? A: I live in British Columbia, Canada. Q: Do you teach piano in real life and what’s your experience? A: Yes I do, I have a private studio, and I have been teaching since 2006. Q: Why are you teaching piano/music for free? A: I’m doing this because I believe music is a gift that everyone should be able to have access to. Q: What ‘secret methods’ can you teach me? A: In my opinion a lot of those “secret piano tricks” are just trying to tempt you into buying their product with the promise of really fast gains. Everyone waited for it to be taken down. 150 million views later, it's still up. Watch it here.

I first heard about the documentary on Saturday morning. 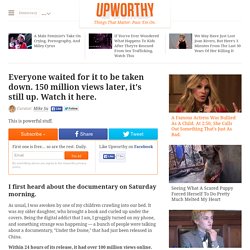 As usual, I was awoken by one of my children crawling into our bed. It was my older daughter, who brought a book and curled up under the covers. Being the digital addict that I am, I groggily turned on my phone, and something strange was happening — a bunch of people were talking about a documentary, "Under the Dome," that had just been released in China. Within 24 hours of its release, it had over 100 million views online. Over the weekend, it had over 150 million views. But here's the really crazy thing — it might have just changed the game when it comes to China's relationship with the environment. Everyone in China, from government officials to concerned parents, was watching it. I emailed a friend of mine in China. In a country where government censorship shuts down critical voices, how did former journalist Chai Jing break through to reach over 100 million people? Absolutely heartbreaking. Here are the powerful final minutes of the stunning documentary that's going viral in China.

Until her unborn daughter was diagnosed with a tumor. 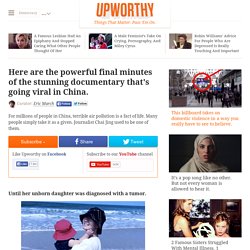 While Chai's daughter ultimately underwent a successful surgery to remove the tumor, she started questioning things she previously took for granted. Like the meat smell that constantly rose up from the restaurant underneath her apartment. Chai always figured that the restaurant didn't have the technology to filter its emissions in the same way that restaurants in countries like the U.S. and the U.K. did. But as it turns out, that wasn't true at all. Soon, other things began occurring to her. Once again, she always assumed there was nothing that could be done about the fumes. Which led her to this conclusion... ...which lead to a revelation... ...which inspired her to make this stunning film. You can watch the final eight minutes of the documentary below, with exclusive English subtitles. The Romanovs - An Imperial Family [2000]

The Lost Prince. The Lost Prince is a British television drama about the life of Prince John – youngest child of Britain's King George V and Queen Mary – who died at the age of 13 in 1919. 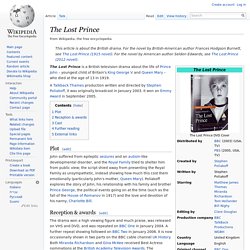 A Talkback Thames production written and directed by Stephen Poliakoff, it was originally broadcast in January 2003. It won an Emmy Award in September 2005. Plot[edit] John suffered from epileptic seizures and an autism-like developmental disorder, and the Royal Family tried to shelter him from public view; the script shied away from presenting the Royal Family as unsympathetic, instead showing how much this cost them emotionally (particularly John's mother, Queen Mary). Poliakoff explores the story of John, his relationship with his family and brother Prince George, the political events going on at the time (such as the fall of the House of Romanov in 1917) and the love and devotion of his nanny, Charlotte Bill.

Reception & awards[edit] Rasputin: Dark Servant of Destiny (1996) Legendado [PT/BR] Tsunami - Caught On Camera - P1. Eloise (books) Eloise is a six-year-old girl who lives in the "room on the tippy-top floor" of the Plaza Hotel in New York City with her Nanny, her pug dog Weenie, and her turtle Skipperdee. 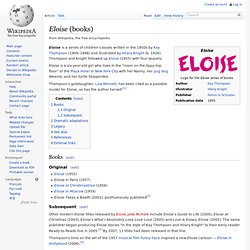 Thompson's goddaughter, Liza Minnelli, has been cited as a possible model for Eloise, as has the author herself.[1] Other modern Eloise titles released by Eloise Jade McHale include Eloise's Guide to Life (2000), Eloise at Christmas (2003), Eloise's What I Absolutely Love Love Love (2005) and Love & Kisses, Eloise (2005). The same publisher began producing Eloise stories "in the style of Kay Thompson and Hilary Knight" to their early-reader Ready-to-Reads line in 2005.[3] By 2007, 11 titles had been released in that line.