None, all, some, much, many, each and every are challenging for multilingual writers when it comes to making verbs agree with their subjects. 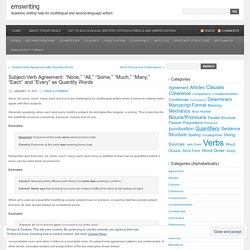 Generally speaking, when each and every modify a subject, its verb takes the singular -s ending. This is also true for the indefinite pronouns everybody, everyone, nobody and no one. Examples: Incorrect: Everyone at the party were wearing funny hats.Correct: Everyone at the party was wearing funny hats. Remember also that none, all, some, much, many, each, and every–in addition to their use as quantifiers before a noun–can be used alone as pronouns.

Examples: Correct: Several police officers were there, but none was wearing a uniform.Correct: Some say that drinking too much tea makes it difficult for them to fall asleep at night. When all is used as a quantifier modifying a plural subject noun or pronoun, or used by itself as a plural subject pronoun, its verb should always be considered plural: Links: Subject-verb agreement Further reading: Am I staying? GMAT Sentence Correction: Getting Cozy with Modifiers. Modifier errors occupy a firm spot in the big 7 error types seen in GMAT sentence correction and can be one of the tougher error types to spot because errors in modification are common in colloquial English. 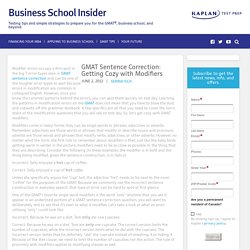 However, once you know the common patterns behind the errors, you can spot them quickly on test day. Learning the patterns in modification errors on the GMAT does not mean that you have to blow the dust and cobwebs off the grammar textbook. A few specifics are all that you need to cover the lion’s share of the modification questions that you will see on test day. So, let’s get cozy with GMAT modifiers.

Modifiers come in many forms; they can be single words or phrases, adjectives or adverbs. Incorrect: Sally enjoyed a hot cup of coffee. Correct: Sally enjoyed a cup of hot coffee. Unless she specifically enjoys her “cup” hot, the adjective “hot” needs to be next to the noun “coffee” for the purposes of the GMAT. Grammar and Punctuation: Subject-Verb Agreement. Watch the subject-verb agreement in your sentences when... 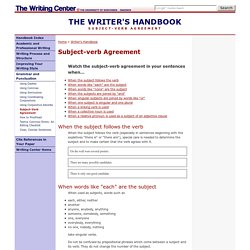 When the subject follows the verb When the subject follows the verb (especially in sentences beginning with the expletives "there is" or "there are"), special care is needed to determine the subject and to make certain that the verb agrees with it. On the wall were several posters. There are many possible candidates. There is only one good candidate. Agreement (linguistics) Agreement or concord happens when a word changes form depending on the other words to which it relates.[1] It is an instance of inflection, and usually involves making the value of some grammatical category (such as gender or person) "agree" between varied words or parts of the sentence. 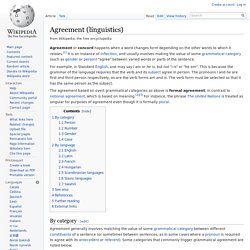 The agreement based on overt grammatical categories as above is formal agreement, in contrast to notional agreement, which is based on meaning.[2][3] For instance, the phrase The United Nations is treated as singular for purposes of agreement even though it is formally plural. Agreement between pronoun (or corresponding possessive adjective) and antecedent also requires the selection of the correct person.

For example, if the antecedent is the first person noun phrase Mary and I, then a first person pronoun (we/us/our) is required; however, most noun phrases (the dog, my cats, Jack and Jill, etc.) are third person, and are replaced by a third person pronoun (he/she/it/they etc.). The girl did her job vs. #5 - Subject-Verb Agreement, SAT Grammar Bootcamp. Pronouns and Antecedents. Pronouns and Their Antecedents Today we’re going to talk about pronouns that don't clearly match up with the nouns they are supposed to replace. 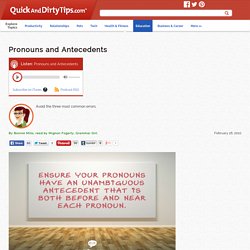 Readers become unhappy when they have to guess what noun a writer is talking about, or readers may even chuckle if a pronoun seems to match up with the wrong noun. Later, you’ll see some sentences that are funny all because of little pronouns. Quick Pronoun Review If you're a regular reader, you'll remember that last week we talked about subject and object pronouns. Sentence Correction I (Agreement Errors) - GMAT/CAT/SAT. Either and Neither.