World Cup flower-power in 1966. What with all the excitement brewing about this year's World Cup tournament hosted by South Africa it reminded one of our readers about a special time in Middlesbrough during the legendary 1966 World Cup. 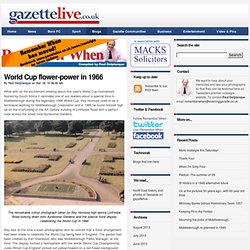 Ray Hornsea used to be a bricklayer working for Middlesbrough Corporation and in 1966 he found himself high up on the scaffolding of the Art Gallery building in Linthorpe Road with a perfect view across the street over Ayresome Gardens. The remarkable colour photograph taken by Ray Hornsea high above Linthorpe Road looking down onto Ayresome Gardens and the special floral display celebrating the World Cup in 1966 Ray was at the time a keen photographer and he noticed that a floral arrangement had been made to celebrate the World Cup being held in England. The garden had been created by Ken Sherwood, who was Middlesbrough Parks Manager, at the time.

Clough on his bike. A picture of the statue of Brian Clough sent in by a reader caused Ian Lawrence to put pen to paper as the memories came flooding back. 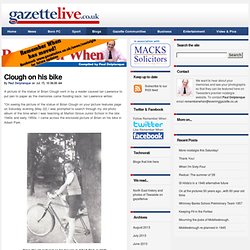 Ian Lawrence writes: "On seeing the picture of the statue of Brian Clough on your picture features page on Saturday evening (May 22) I was prompted to search through my old photo album of the time when I was teaching at Marton Grove Junior School in the late 1940s and early 1950s. I came across the enclosed picture of Brian on his bike in Albert Park. Brian Clough pictured on his bicycle in Albert Park in 1949. When Boro broke the record. Now here is a piece of Boro history that may have escaped the attention of the most ardent supporter, Ayresome Park one time home of the Boro once featured in the Guinness Book of Records. 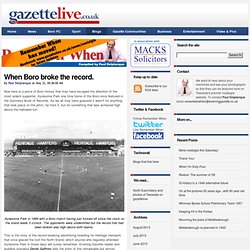 As we all may have guessed it wasn't for anything that took place on the pitch, far from it, but for something that was achieved high above the hallowed turf. Ayresome Park in 1989 with a Boro match having just kicked off since the clock on the stand reads 3 o'clock. The opponents were unidentified but the record that had been broken was high above both teams. This is the story of the record breaking advertising hoarding for Heritage Hampers that once graced the roof the North Stand, which anyone who regularly attended Ayresome Park in those days will surely remember. Evening Gazette reader and budding journalist Derek Gaffney tells the story of this remarkable but almost forgotten event.

Derek Gaffney tells the story of how Boro was once a record breaker. Well done Derek, George, Gary and Les. St Patrick's Church, Cannon Street. Wings over Cannon Street. Pigeon racing has always been a popular pastime among Teesside folk and it is an activity which has been somewhat neglected by Remember When. 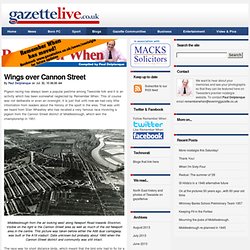 This of course was not deliberate or even an oversight, it is just that until now we had very little information from readers about the history of the sport in the area. That was until we heard from Stan Wheatley who has recalled a very famous race involving a pigeon from the Cannon Street district of Middlesbrough, which won the championship in 1951.

Middlesbrough from the air looking west along Newport Road towards Stockton. Cannon Street. For those who can't remember or are too young to even know, Cannon Street or more accurately the Cannon Street area, which was known officially as Cannon Ward was roughly bounded by Newport Road to the South, Boundary Road (near Sainsbury's now) to the East, The Newport Bridge approach road to the West and the LNER railway to the North. 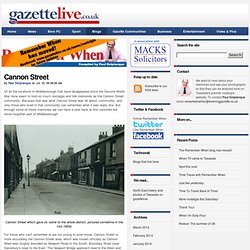 Cannon Street itself ran straight through the middle of this vibrant community East to West from Boundary Road to the Newport Bridge Road. A view of Cannon Street from the top of the Newport Bridge in the 1950s, notice the smoke rising from nearly every chimney. Within this area were a huge number of streets containing thousands of houses almost exclusively built in terraces. Cannon Street memories. Our recent feature on Cannon Street certainly struck a chord with many Remember When readers and stirred lots of memories about this lost Middlesbrough community. 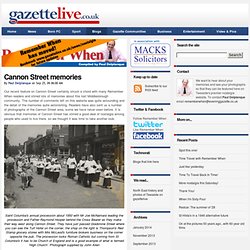 The number of comments left on this website was quite astounding and the detail of the memories quite astonishing. Readers have also sent us a number of photographs of the Cannon Street area, some we have never seen before. It is obvious that memories of Cannon Street has stirred a good deal of nostalgia among people who used to live there, so we thought it was time to take another look.

Saint Columba's annual procession about 1950 with Mr Joe McNamara leading the procession and Father Raymond Hooper behind the Cross Bearer as they make their way west along Cannon Street. St Patrick's Church, Cannon Street, Middlesbrough. We have often featured Cannon Street here on this website and it is clear that the memory of this once vibrant community in Middlesbrough area still stirs emotions among our many readers. 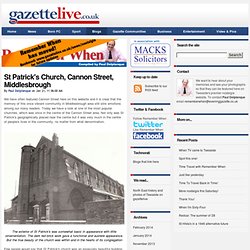 Today we have a look at one of the most popular churches, which was once in the centre of the Cannon Street area. Not only was St Patrick's geographically placed near the centre but it was very much in the centre of people's lives in the community, no matter from what denomination. The exterior of St Patrick's was somewhat basic in appearance with little ornamentation. The dark red brick work gave a functional and austere appearance. The bells of St Hilda's. A few weeks ago we featured a previously unpublished photograph of St Hilda's Parish Church in the Evening Gazette for the daily Remember When picture. 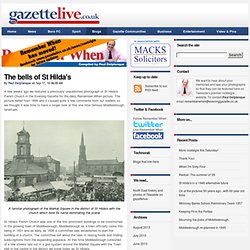 The picture dated from 1899 and it caused quite a few comments from our readers so we thought it was time to have a longer look at this one time famous Middlesbrough landmark. Funfair rides in St Hilda's. All the fun of the fair can be seen in this classic photograph taken in 1934. 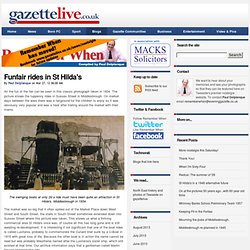 The picture shows the tuppenny rides in Sussex Street in Middlesbrough. On market days between the wars there was a fairground for the children to enjoy so it was obviously very popular and was a treat after trailing around the market with their mams. The swinging boats at only 2d a ride must have been quite an attraction in St Hilda's, Middlesbrough in 1934. St Hilda's Parish Church. Here is a fine view of the parish church of St Hilda's in Middlesbrough pictured in 1899. 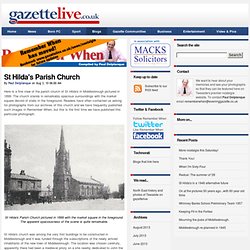 The church stands in remarkably spacious surroundings with the market square devoid of stalls in the foreground. Readers have often contacted us asking for photographs from our archives of this church and we have frequently published such images in Remember When, but this is the first time we have published this particular photograph. St Hilda's nostalgia. Our feature in the January edition of Remember When (issue 95) focused on the area of St Hilda's in Middlesbrough. This brought back a flood of nostalgia for one reader who prefers to remain anonymous, but nevertheless she has provided a very vivid account of her memories living in that area in the years immediately after the war. She wrote: "I saw the Remember When picture of North Street as it was when I was very young. I got a rush of deep nostalgia, so much so, that I had to write down the memories which came and flooded my mind.

" It was this photograph of North Street in particular which brought all the memories flooding back. "I must have been 3 or 4 years old being taken down that road after my mother had done her shopping in the Saturday Market Square. Market Square St Hilda's on a busy market day The houses on the first block I believe they were lodging houses.