Abigail Fishberg Memorial Garden. 74 Ross Lynch facts - Ross Lynch. The Books - Percy Jackson books by Rick Riordan - Puffin Books. Cover image not final Though the Greek and Roman crewmembers of the Argo II have made progress in their many quests, they still seem no closer to defeating the earth mother, Gaea. 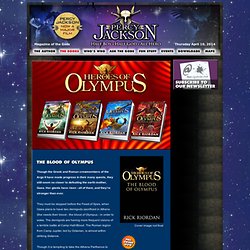 Her giants have risen - all of them, and they're stronger than ever. They must be stopped before the Feast of Spes, when Gaea plans to have two demigods sacrificed in Athens. She needs their blood - the blood of Olympus - in order to wake. The demigods are having more frequent visions of a terrible battle at Camp Half-Blood. Though it is tempting to take the Athena Parthenos to Athens to use as a secret weapon, the friends know that the huge statue belongs back on Long Island, where it might be able to stop a war between the two camps. The fifth book in the Heroes of Olympus series will be published on 7th October 2014. Show Information. Ranger's Apprentice Literary Camp. 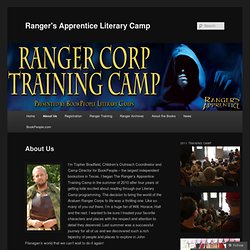 I began The Ranger’s Apprentice Training Camp in the summer of 2010 after four years of getting kids excited about reading through our Literary Camp programming. The decision to bring the world of the Araluen Ranger Corps to life was a thrilling one. Like so many of you out there, I’m a huge fan of Will, Horace, Halt and the rest. I wanted to be sure I treated your favorite characters and places with the respect and attention to detail they deserved. Abigail Fishberg Memorial Fund. 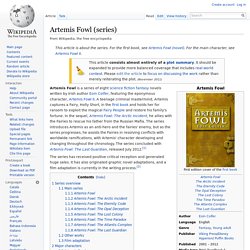 It has also originated graphic novel adaptations, and a film adaptation is currently in the writing process.[2] Artemis Fowl, the main character and anti-hero, and his bodyguard, Butler, kidnap Lower Elements Police Captain Holly Short, a fairy elf, and demand an enormous ransom in fairy gold from the People.The story revolves on how Artemis manages to manipulate and avoid the fairies' desperate attempts to rescue Holly,resulting in the usage of a deadly bio-bomb that wipes out all life forms in near vicinity. A graphic novel adaptation was released in 2007. A film adaptation was reported to be in the writing stage in mid-2008 with Jim Sheridan directing.[3] Artemis Fowl: The Arctic Incident is the second book of the series.

An Online Magazine For Girls Crown of Beauty Magazine. How do you find good henna? Where do you go to get good henna? 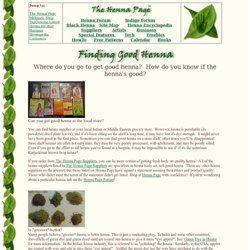 How do you know if the henna's good? Can you get good henna at the local store? You can find henna supplies at your local Indian or Middle Eastern grocery store. However, henna is perishable (its powdered dried plant leaves), and if it's been sitting on the shelf a long time, it may have lost it's dye strength. It might never have been good in the first place. If you order from The Henna Page Suppliers , you can be more certain of getting fresh body art quality henna! Éowyn (band) Éowyn (born Rebecca Éowyn Denee Krueger on March 1, 1979, in McCracken County, Kentucky[1]) is a Christian alternative rock artist from the Nashville, Tennessee area that began in 1999. 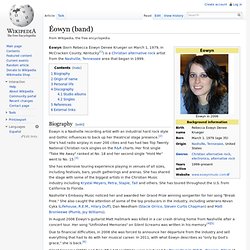 In August 2006 Éowyn's guitarist Matt Hallmark was killed in a car crash driving home from Nashville after a concert tour. Her song "Unfinished Memories" on Silent Screams was written in his memory.[4][5] Due to financial difficulties, in 2008 she was forced to announce her departure from the industry and sell everything that had to do with her musical career. In 2011, with what Éowyn describes as "only by God's grace," she is back.[6] She says, "My name is actually from the Lord of the Rings books and now movies. She is married to her manager and current keyboardist Russell Riggins.[9] Shattered Illusions (2003)[10]Identity (2006)[10]Silent Screams (2008)[10]Beautiful Ashes (2011)[10][11] Official website. 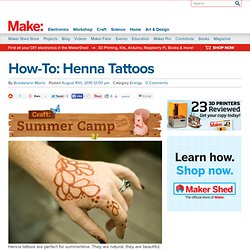 They are natural, they are beautiful, and they are temporary! Because one batch of henna goes a long way, henna tattoos are a great activity for parties and are especially fun for kids at a sleep over. I tend to give them as part of celebrations, say at a baby shower or bachelorette party, but I also love giving them to people who need some love and healing. When Goli had her knee surgery, I gave her a henna tattoo on her foot. A pretty henna tattoo stays with the wearer as a reminder of love and joy before it fades away. Materials for the Henna Paste: Henna powder, 1/4 cup Tea, strongly brewed, 2-3 tablespoons 1 Lemon Eucalyptus Oil, 3-5 drops Materials for Applying the Tattoo: Squeeze bottle Various tips Straight pin Q-tips Cotton ballls Lemon Sugar Materials to Remove the Paste: Olive Oil Cotton balls Step 1: Check your henna for any sticks or large bits of plant matter. Step 3: As you draw, you will inevitably make mistakes.