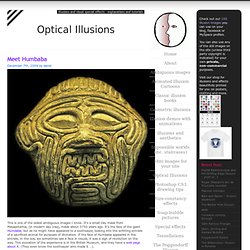 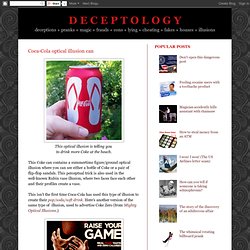 This Coke can contains a summertime figure/ground optical illusion where you can see either a bottle of Coke or a pair of flip-flop sandals. This perceptual trick is also used in the well-known Rubin vase illusion, where two faces face each other and their profiles create a vase. This isn't the first time Coca-Cola has used this type of illusion to create their pop/soda/soft drink. 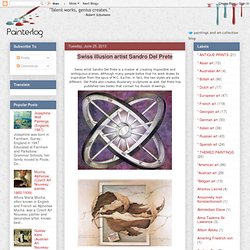 Although many people belive that his work draws its inspiration from the opus of M.C. Escher, in fact, the two styles are quite different. Swiss illusion artist Sandro Del Prete. World Domination Society! - Philosophy. This article by Costica Bradatan contains seeds of how to interpret our lives. 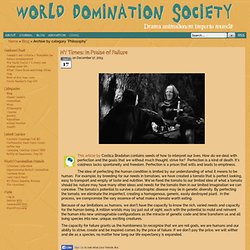 How do we deal with perfection and the goals that we without much thought, strive for? Perfection is a kind of death. It’s coldness lacks spontaneity and freedom. Perfection is a prison that wilts and leads to emptiness. The idea of perfecting the human condition is limited by our understanding of what it means to be human. Optical Illusion - General Knowledge , Entertainments , Computer Software etc.. This article is about visual perception. 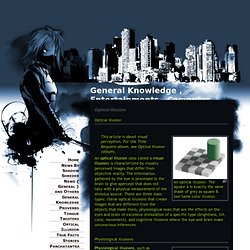 Optical Illusions. Go back a couple of centuries and there were no chains of shops or malls. 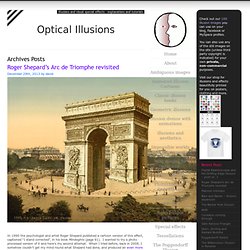 In the high street in the UK you would have found the type of shop you were after by looking out for a sign hanging out. There were signs for pharmacists, tobacconists, pawnbrokers, whatever. Nowadays there’s just one traditional sign still sometimes to be seen – the barber’s pole, as left in the animation. Optical Illusions. Vintage and Ambiguous. Www.shughes.org/phantograms/Documents/Intro to Phantograms.pdf. File:Anamorphosis.jpg.

How to Draw a 3D Optical Illusion with Pencil - An Alien Spying Eye in 3D. The Brain's Constructions and Deconstructions of "Reality" Illusions, ambiguous figures, and impossible figures: informed guessing and beyond. 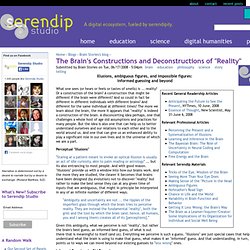 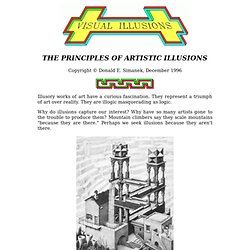 Simanek, December 1996 Illusory works of art have a curious fascination. They represent a triumph of art over reality. They are illogic masquerading as logic. Why do illusions capture our interest? Making ambiguous illusions. Optical illusion. List of optical illusions. The world's most famous optical illusion. "All is Vanity" (Click to enlarge) 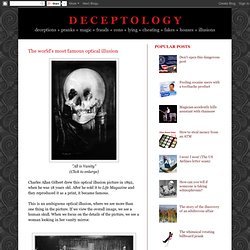 Giordano Bruno and the Hermetic Tradition: Frances A. Yates: 9780226950075: Amazon.com. What's the relationship between optical illusions and the idea of reality. If everything we know comes from our perception of the world, and reality is really just an experience in our minds, optical illusions may suggest what we perceive and what is real are different and can never be the same. 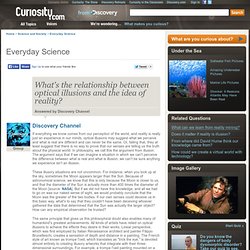 Or, failing that, they at least suggest that there is no way to prove that our senses are telling us the truth about the physical world. In philosophy, we call this the argument from illusion. The argument says that if we can imagine a situation in which we can't perceive the difference between what is real and what is illusion, we can't be sure anything we experience isn't an illusion. These illusory situations are not uncommon. For instance, when you look up at the sky, sometimes the Moon appears larger than the Sun. Developments in Perspective.

Dr. Kim H. Veltman Developments in Perspective Abstract A growing historical awareness means that there have been many more books on Renaissance perspective published in the twentieth than in the fifteenth and sixteenth centuries combined. Key Innovations and Artists of the Italian Renaissance. I have superimposed perspective lines illustrating the use of 1-point linear perspective in "View of an Ideal City", a painting by Piero della Francesca.

The Hidden Horse Head. How to view stereograms. At first look stereogram is similar to nothing more but a tiled pattern, however, with a proper look you can discover amazing 3D image hidden inside. And it's not just a play of imagination, the hidden image is very realistic. You will see exactly what was put in by a stereogram artist. Basically you need to unfocus your eyes and look through the stereogram. Picture becomes blurry and doubled and that exactly what we want. This will make pattern tiles to overlap each other and each eye will be seeing slightly different image. Some people who have problems with binolular vision most likely will not be able to see hidden image. There are different methods to learn seeing stereograms, one or another may work out better for you, though all will require some patience. Method 1 - Face it.

Anamorphosis. Example of mirror anamorphosis Anamorphosis is a distorted projection or perspective requiring the viewer to use special devices or occupy a specific vantage point to reconstitute the image. The word "anamorphosis" is derived from the Greek prefix ana‑, meaning back or again, and the word morphe, meaning shape or form. Types of projection[edit] There are two main types of anamorphosis: perspective (oblique) and mirror (catoptric). Examples of perspectival anamorphosis date to the early Renaissance (fifteenth century).

Anamorphosis. Trompe-l'œil. Trompe-l'œil (French for deceive the eye, pronounced [tʁɔ̃p lœj]), which can also be spelled without the hyphen and ligature in English as trompe l'oeil,[1] is an art technique that uses realistic imagery to create the optical illusion that depicted objects exist in three dimensions. Forced perspective is a comparable illusion in architecture. History in painting[edit] 86.03.08: The Illusion of the Renaissance. Guest Post by Laetitia Barbier. I am very pleased to introduce the first of what I hope will be many guest posts by Morbid Anatomy Library intern Laetitia Barbier; she has been working with us on and off over the past few years, and has just returned to America to finish her dissertation for The Sorbonne on painter Joe Coleman. Laeti will be writing a series of short articles for this blog based on her favorite books in the Morbid Anatomy Library; following is her first: While helping Joanna with the post-Hurricane Sandy library unpacking, I recently stumbled upon this incredible book.

Squeezed between larger volumes of the vast “Death and Art” section, this amethyst-colored booklet was so thin that its title was almost impossible to read. “Spectropia or the Surprising Spectral Illusions Showing Ghosts Everywhere and of any Colors” - A rather theatrical headline, rendered on the front cover in a multiple typography layout evoking 19th century entertainment posters. Optical illusions from the Renaissance. That Borromini, he's messing with your brain - Optical illusions from the Renaissance.