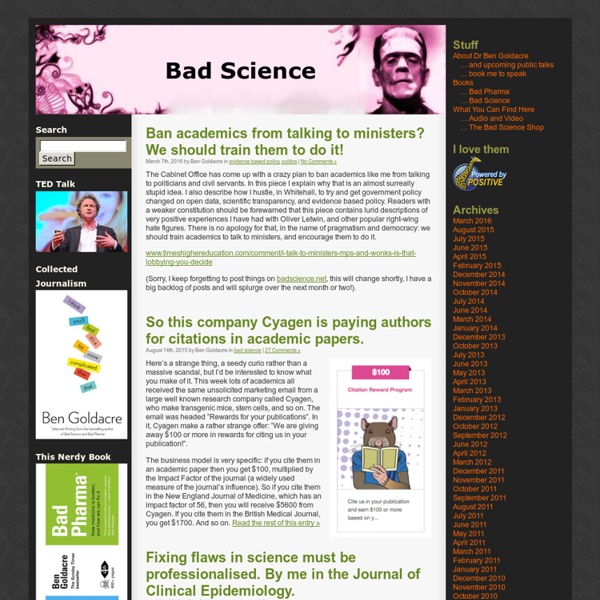 Statins have no side effects? What our study really found, its fixable flaws, and why trials transparency matters (again). Hi there, sorry to be absent (dayjob!). I was surprised to see a study I’m a co-author on getting some front page media play today, under the headline “Statins ‘have no side effects’”. That’s not what our paper found. But it was an interesting piece of work, with an odd result, looking at side effects in randomised trials of statins: specifically, and unusually, it compares the reports of side effects among people on statins in trials, against the reports of side effects from trial participants who were only getting a dummy placebo sugar pill.

Post-Modern Science: The Illusion of Consciousness Sees Through Itself    We have always struggled with the limits to how human language can express our thoughts about reality. But post-modern science dismisses the struggle as futile: We did not evolve to perceive reality. That conviction is changing cosmology dramatically. We know almost nothing about the human consciousness but naturalism must treat it as evolved from unconscious elements. Much confusion is avoided by recognizing that that is a core assumption, not a discovery. The Christopher Hitchens Web WhitePagesGoesGreen.org by YellowPagesGoesGreen.org (Yellow Pages Directory Inc.) is a leading online directory allowing users to search an online database and telephone directory for all telephone numbers in the USA. Using the above boxes, simply type in a name and location. Even if you don't have the complete information, the telephone number lookup database can help you find phone numbers.

Planet of the Apes POSTED: Sunday, September 30, 2012, 12:34 PM Peter Andolfatto One of the more difficult aspects of evolution for some people to swallow is the notion that random copying errors in DNA can add up to anything useful. Inside the Human Body Recent Episodes Available for: ‘Inside the Human Body’ Inside the Human Body -1×4- Hostile World May 27th, 2011 | Merseyside Skeptics Society Skeptics with a K Skeptics with a K is the official podcast of the Merseyside Skeptics Society. Each episode features Mike, Marsh and Alice chatting about stuff that interests them, often with a skeptical angle. Subscribe via RSS |Subscribe via iTunes

Make a URL “Pretty” When working with students I like to use Google Spreadsheets because my entire class can be on the same document at the same time. Because a spreadsheet is divided up into boxes (cells) each student can have their own spot without “stepping” on other students inputting information. If students create digital projects and you want them to view other students projects, try having students put their link into a collaborative Google Spreadsheet.

Quackcast A podcast review of Quacks, Frauds and Charlatans. Oops. Thats not right. Chaos Theory: A Brief Introduction What exactly is chaos? The name "chaos theory" comes from the fact that the systems that the theory describes are apparently disordered, but chaos theory is really about finding the underlying order in apparently random data. When was chaos first discovered? The first true experimenter in chaos was a meteorologist, named Edward Lorenz. In 1960, he was working on the problem of weather prediction. He had a computer set up, with a set of twelve equations to model the weather.