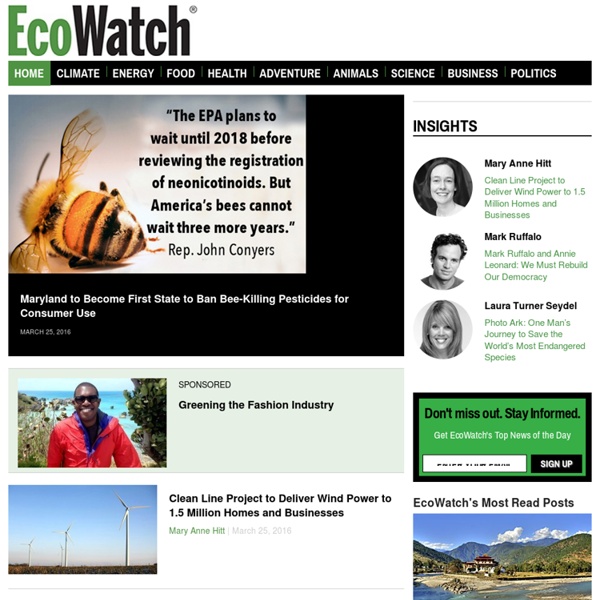 This man built a floating solar-powered fortress made out of 150,000 recycled water bottles Off the cost of Isla Mujeres Bay in Cancun, Mexico, environmentalist and architect Richart Sowa lives comfortably on his island made of over 150,000 recycled water bottles. Sowa first built his floating abode in 2005, but harsh weather destroyed the island. On his third attempt of rebuilding his home— this time in calm waters—he succeeded in developing a sturdy home. He has been living almost completely self-sustainably on his private island since 2008. “Living on my own floating island has been my dream for over two-decades,” said Sowa in Daily Mail, unfazed by his previous attempts. The Transparent Society Synopsis[edit] David Brin with sousveillance "maybecamera" at the Association of Computing Machinery's (ACM's) CFP conference where such a sousveillance device was given to each attendee. Brin participated in the Opening Keynote on the "inverse panopticon".

Consumer Reports WebWatch: The leader in investigative reporting on credibility and trust online Consumer Reports Web Watch was, until 2009, the Internet integrity division of Consumer Reports. The project was funded by grants from the Pew Charitable Trusts, the John S. and James L. Knight Foundation, and the Open Society Institute. We assisted Consumer Reports’ editorial division in evaluating the credibility of Web sites, we investigated Web sites on behalf of consumers, and we advocated for consumer-focused Internet policy and governance. While ConsumerWebWatch.org is no longer a stand alone website, the work is still being done.

Case Study: The Nature House (Naturhuset) - Solardome Industries Aspirational Norwegian couple create a ‘Grand Designs’ style geodesic dome home Inspired by the Nature House in Sweden, the Hjertefølgers wanted a large glass dome to cover an entire home and garden on their 7000m² remote island site near Bodo, in the Arctic Circle. Original dome home design concept Their vision was to create a sustainable eco home and way of life for their family that would be beautiful, ecological and healthy. The Hjertefølgers, aware of the robust properties of a geodesic dome, wanted a dome to provide a strong glass cover to their home.