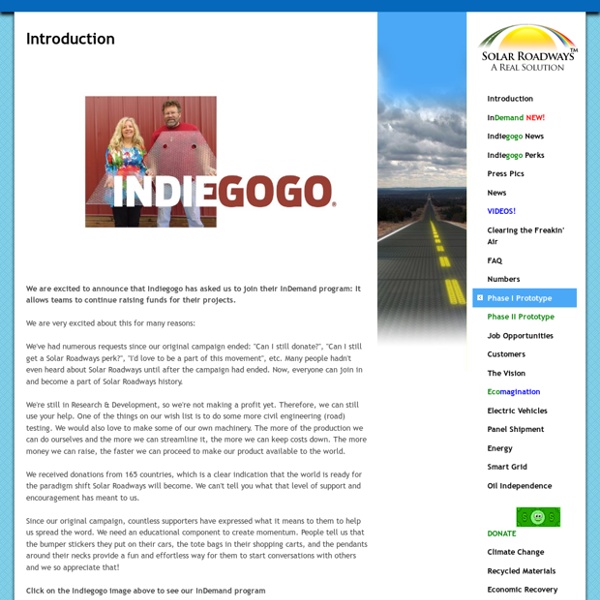 We are excited to announce that Indiegogo has asked us to join their InDemand program: It allows teams to continue raising funds for their projects. We are very excited about this for many reasons: We've had numerous requests since our original campaign ended: "Can I still donate?", "Can I still get a Solar Roadways perk?", "I'd love to be a part of this movement", etc. Many people hadn't even heard about Solar Roadways until after the campaign had ended. We're still in Research & Development, so we're not making a profit yet. We received donations from 165 countries, which is a clear indication that the world is ready for the paradigm shift Solar Roadways will become. Since our original campaign, countless supporters have expressed what it means to them to help us spread the word. Click on the Indiegogo image above to see our InDemand program Solar FREAKIN' Roadways Innovation Nation - Solar Roadways Phase II Prototype Solar Parking Lot Pet Friendly! LEDs Tractor test U.S. Everyone has power.

Long-standing climate paradox resolved (Phys.org) —Climate scientists have long documented the strong control of Earth's orbital variations on the waxing and waning of the great ice ages, when huge "pluvial" lakes filled the valley floors of the Great Basin. For years it was thought that Great Basin climate marched to the tune of a different drummer. This paradox arose from an iconic climate record from Devils Hole, Nev., which suggested that Great Basin climate warmed out of glacial periods before warming from changes in the earth's orbit. CitiPower and Powercor - Power outages Service area boundary Only outages within the Citipower and Powercor distribution networks are displayed. Please contact the appropriate electricity distributor for information on other areas. Powercor Network CitiPower Network

Floating city of the future could be built off Hong Kong coast Floating City dreamed up by British and Asian designers showing what cities of the future could look likeWould feature farms, docks, canals, a hotel, entertainment complex and a huge floating stadium for sportsMetropolis made from hexagonal and triangular modules which attach with underground walkways and tunnels By Chris Pleasance Published: 10:12 GMT, 28 May 2014 | Updated: 12:05 GMT, 28 May 2014 How Newsweek's 'global cooling' story got its legs Jan. 10, 2014 Nine paragraphs written for Newsweek in 1975 continue to trump 40 years of climate science. It's a record that has the author amazed. ShareThis By Doug StruckThe Daily Climate

Sustainable Style Meets Eco-Friendly Design At Atelier Akeef Eco-conscious fashion is not a passing trend or a design fad that will blow away in a season or two. People in every sphere of life are embracing green designs with plenty of gusto and located in the Mitte neighborhood of Berlin, the Atelier Akeef Store epitomizes this changing trend. It is the first high-end menswear boutique in the locality that is completely dedicated to sustainable fashion.

Young People Are Taking the Government to Court Over Its Failure to Address Climate Change This post first appeared in The Nation. In an unprecedented federal court case that has made it to the DC Circuit Court of Appeals, young people from California are suing the Environmental Protection Agency and Departments of Interior, Agriculture, Commerce, Energy and Defense under the historic “public trust doctrine” for failing to devise a climate change recovery plan. In their legal brief, they argue, “Failure to rapidly reduce CO2 emissions and protect and restore the balance of the atmosphere is a violation of Youth’s constitutionally protected rights and is redressable by the Courts.”

World Energy Outlook 2016 World Energy Outlook 2016 sees broad transformations in the global energy landscape As a result of major transformations in the global energy system that take place over the next decades, renewables and natural gas are the big winners in the race to meet energy demand growth until 2040, according to the latest edition of the World Energy Outlook, the International Energy Agency’s flagship publication. A detailed analysis of the pledges made for the Paris Agreement on climate change finds that the era of fossil fuels appears far from over and underscores the challenge of reaching more ambitious climate goals.