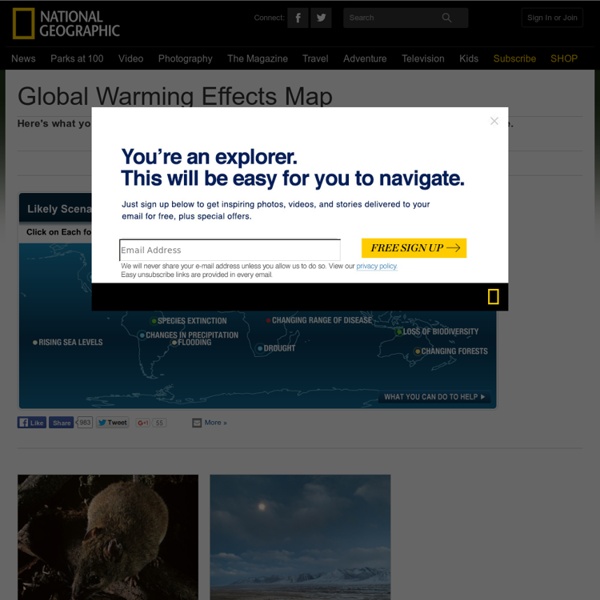 First Mammal Species Goes Extinct Due to Climate Change The humble Bramble Cay melomys has disappeared from its island in the Great Barrier Reef. Climate Change Making Calendars Run Amok People in Central Asia are recalibrating their system of time to adapt to a changing ecosystem. The Great Energy Challenge The National Geographic initiative is a call to action to become actively involved, to learn more and do more—to change how we think about and consume energy so that we can all help tackle the big energy questions. U.S.' The Arctic Is Melting. Related:  Climate Change • Environment

Global Warming Effects Map - Effects of Global Warming Is Shrinking Sea Ice Behind Chilly Spring? First it was the fault of Punxsutawney Phil, the groundhog who mistakenly forecasted a quick end to winter. Now climate scientists are saying that Arctic sea ice—or the lack of it—is a driving force behind the Northern Hemisphere's unseasonably cold spring. As Northern Hemisphere temperatures remain below normal more than a week into the official start of spring, a team of meteorologists and climate scientists are pointing to recent research that suggests sea ice cover is a likely culprit. Recent imaging from the U.S. National Snow and Ice Data Center showed a historic minimum in Arctic ice cover last fall, and current data reveals that sea ice cover—which recently reached its maximum for the year—is at its sixth lowest extent in the satellite record. (Related: "Arctic Sea Ice Hits Record Low—Extreme Weather to Come?") It's a tough thing to understand. But the way weather works isn't so simple. Sea Ice Culprit The problem is compounded by moisture. Wild Weather A study released by the U.S.

Rising temperature difference between hemispheres could dramatically shift rainfall patterns in tropics One often ignored consequence of global climate change is that the Northern Hemisphere is becoming warmer than the Southern Hemisphere, which could significantly alter tropical precipitation patterns, according to a new study by climatologists from the University of California, Berkeley, and the University of Washington, Seattle. Such a shift could increase or decrease seasonal rainfall in areas such as the Amazon, sub-Saharan Africa or East Asia, leaving some areas wetter and some drier than today. "A key finding is a tendency to shift tropical rainfall northward, which could mean increases in monsoon weather systems in Asia or shifts of the wet season from south to north in Africa and South America," said UC Berkeley graduate student Andrew R. Friedman, who led the analysis. "Tropical rainfall likes the warmer hemisphere," summed up John Chiang, UC Berkeley associate professor of geography and a member of the Berkeley Atmospheric Sciences Center. 20th century rainfall patterns

Climate Change - The Effect on Wildlife | Young People's Trust For the Environment Many, many species of plants and animals are likely to be affected by climate change. Let’s pick out a few examples: Polar Bears – These wonderful animals need ice to live on; it is their habitat and they are specifically adapted to hunting and breeding on and around it. Seals need ice flows too – to rest and give birth to their pups. Plankton and Krill – at the beginning of the food chain, microscopic plankton and the tiny krill provide food for a huge number of animals in the sea, from barnacles, to fish and even sharks and whales. For many animals, such as mosquitoes and egrets, global warming could be a good thing as it means they can spread further afield into parts of the world that were previously too cold. Many plants are not coping as well with climate change either. The climate is changing faster than the plants and some animals can adapt to the changes.

Decline of bees forces China's apple farmers to pollinate by hand In the last 50 years, the global human population has nearly doubled, while the average calories consumed per person has increased by about 30%. To cope with the ever growing demand for food, more land has been brought into agricultural production, mainly by clearing forests, and farming has become much more intensive. Fertilisers, pesticides, and development of new plant varieties have allowed farmers to increase the average yield of food per hectare to increase by 130% in the same period. It is obvious that this pattern cannot go on for ever; we will run out of forests to clear, and we cannot squeeze ever more food from the same area of land. Globally, about 75 billion tons of soil is lost every year, washed away or blown out to sea after ploughing. Modern farming threatens to eradicate these organism, and so undermine itself. Pollination provides one of the clearest examples of how our disregard for the health of the environment threatens our own survival.

Future Climate Change | Climate Change Key Points Continued emissions of greenhouse gases will lead to further climate changes. Future changes are expected to include a warmer atmosphere, a warmer and more acidic ocean, higher sea levels, and larger changes in precipitation patterns. The extent of future climate change depends on what we do now to reduce greenhouse gas emissions. The more we emit, the larger future changes will be. Increasing greenhouse gas concentrations will have many effects Greenhouse gas concentrations in the atmosphere will continue to increase unless the billions of tons of our annual emissions decrease substantially. Increase Earth's average temperature Influence the patterns and amounts of precipitation Reduce ice and snow cover, as well as permafrost Raise sea level Increase the acidity of the oceans These changes will impact our food supply, water resources, infrastructure, ecosystems, and even our own health . Future changes will depend on many factors Climate Models and Scenarios Confidence

Ethiopia May Paradoxically Benefit From Climate Change Suffering from corruption, poor sanitation, malnutrition, and enormous economic inequality, Ethiopia is a troubled nation to say the least. However, a new study reveals that it may be getting a welcome boost from a most unlikely source – climate change. Writing in the journal Climatic Change, a team from Virginia Tech (VT) has concluded that the flow of water to the Ethiopian Blue Nile Basin (BNB) will likely increase as the world inexorably warms. This will allow crops to be grown throughout multiple seasons of the year, potentially rescuing its faltering agricultural sector. “For all the catastrophic impacts of climate change, there are some silver linings,” coordinating researcher Zach Easton, an associate professor of biological systems engineering at VT, said in a statement. The team’s cutting-edge hydrogeological models, based on calculations developed by the International Panel on Climate Change (IPCC), assume that the world will continue to warm fairly rapidly.

1-800-Recycling - Find Recycling Center Locations and How To Recycle Specific Items March 27, 2014 How to Recycle Cell Phones The average American gets a new cell phone every 18 months. Learn how you can recycle or reuse your older model when you upgrade. March 25, 2014 How to Recycle Printers Consumers have plenty of options when it comes to recycling printers, which are made of several recyclable materials.

Elevated carbon dioxide making arid regions greener Scientists have long suspected that a flourishing of green foliage around the globe, observed since the early 1980s in satellite data, springs at least in part from the increasing concentration of carbon dioxide in Earth's atmosphere. Now, a study of arid regions around the globe finds that a carbon dioxide "fertilization effect" has, indeed, caused a gradual greening from 1982 to 2010. Focusing on the southwestern corner of North America, Australia's outback, the Middle East, and some parts of Africa, Randall Donohue of the Commonwealth Scientific and Industrial Research Organization (CSIRO) in Canberra, Australia and his colleagues developed and applied a mathematical model to predict the extent of the carbon-dioxide (CO2) fertilization effect. The team's model predicted that foliage would increase by some 5 to 10 percent given the 14 percent increase in atmospheric CO2 concentration during the study period.

Climate change explained in six graphics Earth's Inconstant Magnetic Field Earth's Inconstant Magnetic Field Our planet's magnetic field is in a constant state of change, say researchers who are beginning to understand how it behaves and why. Every few years, scientist Larry Newitt of the Geological Survey of Canada goes hunting. He grabs his gloves, parka, a fancy compass, hops on a plane and flies out over the Canadian arctic. His quarry is Earth's north magnetic pole. At the moment it's located in northern Canada, about 600 km from the nearest town: Resolute Bay, population 300, where a popular T-shirt reads "Resolute Bay isn't the end of the world, but you can see it from here." Right: The movement of Earth's north magnetic pole across the Canadian arctic, 1831--2001. Scientists have long known that the magnetic pole moves. The pole kept going during the 20th century, north at an average speed of 10 km per year, lately accelerating "to 40 km per year," says Newitt. Keeping track of the north magnetic pole is Newitt's job. Probably not. Feature Author: Dr.

Genghis Khan's Secret Weapon Was Rain For unsuspecting herdsmen in the 13th century, April showers didn't bring May flowers—they brought Mongol hordes. New research by tree-ring scientists from Columbia University's Lamont-Doherty Earth Observatory and West Virginia University may have uncovered the reason why an obscure band of nomadic Mongol horsemen were able to sweep through much of Asia in a few meteoric decades 800 years ago, conquering everything in their path: They enjoyed an unprecedented, and yet-to-be-repeated, 15-year run of bountiful rains and mild weather on the normally cold and arid steppes. By sampling tree rings in the gnarled and twisted Siberian pines in the Hangay Mountains in central Mongolia, the team pieced together a remarkably precise chronology of local climatic conditions stretching from the year 900 A.D. to the present. The study, published in this week's Proceedings of the National Academy of Sciences, offers a new interpretation of why the Mongols suddenly went on the move. And ride it he did.

Slow-motion wrecks: how thawing permafrost is destroying Arctic cities | Cities At first, Yury Scherbakov thought the cracks appearing in a wall he had installed in his two-room flat were caused by shoddy workmanship. But then other walls started cracking, and then the floor started to incline. “We sat on the couch and could feel it tilt,” says his wife, Nadezhda, as they carry furniture out of the flat. Yury wasn’t a poor craftsman, and Nadezhda wasn’t crazy: one corner of their five-storey building at 59 Talnakhskaya Street in the northern Russian city of Norilsk was sinking as the permafrost underneath it thawed and the foundation slowly disintegrated. In March 2015, local authorities posted notices in the stairwells that the building was condemned. Cracking and collapsing structures are a growing problem in cities like Norilsk – a nickel-producing centre of 177,000 people located 180 miles above the Arctic Circle – as climate change thaws the perennially frozen soil and increases precipitation. The city has been offering residents replacement homes elsewhere.

Here is my manifesto for rewilding the world | George Monbiot | Comment is free Until modern humans arrived, every continent except Antarctica possessed a megafauna. In the Americas, alongside mastodons, mammoths, four-tusked and spiral-tusked elephants, there was a beaver the size of a black bear: eight feet from nose to tail. There were giant bison weighing two tonnes, which carried horns seven feet across. The short-faced bear stood 13ft in its hind socks. One hypothesis maintains that its astonishing size and shocking armoury of teeth and claws are the hallmarks of a specialist scavenger: it specialised in driving giant lions and sabretooth cats off their prey. The Argentine roc (Argentavis magnificens) had a wingspan of 26ft. During the previous interglacial period, Britain and Europe contained much of the megafauna we now associate with the tropics: forest elephants, rhinos, hippos, lions and hyenas. Most of the deciduous trees in Europe can resprout wherever the trunk is broken. All this has been forgotten, even by professional ecologists.