MIT Researchers are Printing Solar Cells on Sheets of Paper 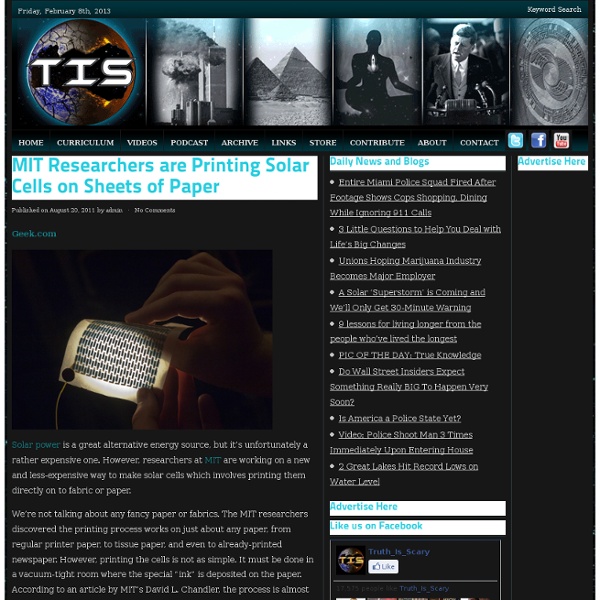 Published on August 20, 2011 by admin · No Comments Geek.com Solar power is a great alternative energy source, but it’s unfortunately a rather expensive one. However, researchers at MIT are working on a new and less-expensive way to make solar cells which involves printing them directly on to fabric or paper. We’re not talking about any fancy paper or fabrics. It’s a much easier method than the current one, which needs super high-temperature liquids at several hundred degrees Celsius to create the cells. The substrate of the current method is usually glass and requires a number of other components that are expensive and result in a heavy, rigid object – and that’s not even taking into account the installation costs. Read Entire Article HERE

Solar Power To Be Sold For Less Than Coal Clean Power Published on February 3rd, 2013 | by Nicholas Brown Update: Some sentences and links have been added to this post to provide better context and comparison. Update #2: I’ve published two articles on energy subsidies in response to comments on this post regarding that matter. They are: “Energy Subsidies — Clean Energy Subsidies vs Fossil Subsidies” and “Oil Subsidies & Natural Gas Subsidies — Subsidies For The Big Boys.” According to a Power Purchase Agreement (PPA) between El Paso Electric Company and First Solar, electricity will be sold from First Solar’s thin-film solar panels to El Paso Electric Company for 5.8 cents per kWh (a good 4-8 cents cheaper than new coal, which is in the 10-14 cents per kWh range). A First Solar installation of some of its CdTe panels. The name of the power plant is Macho Springs Solar Park. Clearly, even compared to the wholesale price of electricity from the cheapest energy options, this is quite competitive. Follow me on Twitter: @Kompulsa

Tesla Technology: 5 Bladeless Turbines About To Revolutionize Energy Production Tesla Technology: 5 Bladeless Turbines About To Revolutionize Energy Production www.endalldisease.com “Every home in America can run on wind energy. In fact these units can be installed on existing power poles in rural areas, to catch the wind and send its energy back to the plant.” - Raymond Green, Inventor In 1913, Inventor Nikola Tesla patented a bladeless steam turbine that he claimed was the most efficient and the most simple rotary engine ever designed. One century later, we now have all the materials needed to build Tesla’s turbine, and in 2010, a patent was issued to a company called Solar Aero for a wind turbine based on the Tesla design. Current wind turbine technology with rotating blades is both inefficient, and causes noise pollution, which has been reported to have detrimental health effects on residents living nearby. Bladeless Wind Turbine #1: ‘The Saphonian’ Bladeless Wind Turbine #2: ‘The EWICON’

Update! 15 PowerPoint Slides That Shook the Earth : Greentech Media If you attend enough cleantech events or are pitched by enough startups, you start to see the same few PowerPoint slides over and over again. Here is a collection of the best or at least the most notorious and historically significant slides in our industry. This collection has been one of our most popular pieces and I'm taking the opportunity to update some of the charts and add some additional commentary. After publishing this list to an overwhelming response, we heard from the original architects of some of these iconic greentech slides and we made sure to give them their overdue credit. From the BP Statistical Review of World Energy -- here's a painful reminder of what we pay at the pump. Make sure to contrast that with the Price Trends in Solar Modules in this slide with data from IPCC and Paula Mints of Navigant. Lawrence Livemore's classic Energy Flowchart: A good slide provides a wealth of information in an intuitive, understandable way -- and this slide certainly does that.

Business | Solar energy giants discovering Ontario A coming green-energy law and the promise of long-term incentives for producers of renewable power have put Ontario on the radar of some big-name solar companies looking for certainty in a volatile marketplace. This month alone, Tempe, Ariz.-based First Solar Inc., one of the world's leading suppliers of next-generation solar modules, and solar power supplier Recurrent Energy Inc. of San Francisco have acquired and plan to develop multi-megawatt solar projects in Ontario. Meanwhile, San Jose, Calif.-based Nanosolar Inc. tells the Toronto Star that it is seriously eyeing Ontario as the location of a regional assembly plant for its thin-film solar modules. Nanosolar is also working with French energy giant EDF Energies Nouvelles to map out project potential in the province. "The Ontario policies are very promising and we are now actively tracking this," said Nanosolar founder and chief executive Martin Roscheisen. As systems grow larger the feed-in tariff declines.

Bloom Energy Revealed on 60 Minutes! : Greentech Media After almost a decade of development and hundreds of millions in investment, Bloom Energy is coming out. Until now, all we've been able to garner were "no comments" from their marketing people. But this weekend, there's a Bloom piece airing on 60 Minutes that will feature none other than Greentech Media editor-in-chief Michael Kanellos. And next week is the official press conference and unveiling. Over the years, we've heard news and rumors on Bloom that included: Bloom customers include eBay, Google, Lockheed, Wal-Mart, Staples and the CIA. That customer list is certainly impressive, as is the alleged backlog. According to the CBS News article: Stahl is the first journalist to be allowed into the Bloom Energy lab and factory where currently one box a day is built. John Doerr, the Kleiner Perkins partner who invested in Bloom, has high hopes. But there is another hurdle says Michael Kanellos, editor-in-chief of Greentech Media. A little patent searching by Mr. And:

The Emerging Climate Technology Consensus Update (Jul 16, 2010): Expanding on a Washington Post op-ed, Vinod Khosla delineates his argument "about the deficiencies of an isolated cap-and-trade or carbon-pricing bill," and joins the climate technology consensus. Khosla writes, "If we want to make a significant difference, we need to get on the path to reducing carbon worldwide by 80 percent now by focusing on what I call "carbon reduction capacity building" -- in other words, we need to develop radical carbon-reduction technologies. A utility cap (or a carbon price) won't build capacity -- it will just increase our utility costs and decrease our manufacturing competitiveness without any increase in our technological competitiveness. Update (Jul 14, 2010): Other observers have reached similar conclusions about the faltering pollution paradigm. Walter Russell Mead and Clive Crook weigh in on "The Big Green Lie" but can't agree on what it is. By Ted Nordhaus and Michael Shellenberger (Click on a topic below to expand...) No.

Why Bill Gates is wrong Bill Gates is sad that David Roberts thinks he’s wrong.Photo: redmaxwell via FlickrBill Gates, the Microsoft founder and philanthropist, made waves last week when, at the much-celebrated tech conference TED, he proclaimed that climate change is the most important problem facing the planet. Wo0t! Obviously having someone of Gates’ stature supporting the clean energy race is an unqualified good. (See Alex Steffen on Gates’ talk.) That said, Gates has burst on to the energy scene with some rather ill-considered thinking. Now: it’s incontestably true that the U.S. investment in R&D is lower than it should be. There are two problems with Gates’ dichotomy between innovation and insulation. 1. I don’t know if Heinberg’s right. Getting maximum energy services out of each electron will be an overriding human imperative in the 21st century, and it will require every bit as much ingenuity and imagination as the pursuit of new generation technology. 2. Cool, right?! One could go on.

Installing a Solar Energy System Like many of you reading this article, I am fairly new to the realization that our future may not turn out the way we originally planned. A little over two years ago, after the financial turmoil set in, I began to wake up from my comfortable, relatively uncomplicated life and take a closer look at what was going on around me. I was first introduced to the Crash Course by an attendee at the 2009 CPAC Liberty Forum in Washington, DC where I had gone to hear Ron Paul speak. Little did I know how dramatic an impact that one conversation would have on my life. After watching the Crash Course a couple of times, many pieces of the puzzle started to fall together, and I quickly progressed to Stage 4 - Fear. I hope reading about the thermal and photovoltaic solar systems we have installed will encourage you to think about actions you can take to prepare for our uncertain future. Our House – NOT a Model of Sustainability The Panic Goals Thermal Solar System Our System – Design & Theory of Operation

The Problem of Growth That source is the hierarchal structure of human civilization. Hierarchy demands growth. Growth is a result of dependency. The solution to the problem of growth, then, is the elimination of dependency. This essay will elaborate on each of those points, and then propose a means to effectively eliminate dependency by creating minimally self-sufficient but interconnected networks that I call Rhizome. I. Why must hierarchy continually grow and intensify? Human Psychology Drives Growth Humans fear uncertainty, and this uncertainty drives growth. One of the seeds of hierarchy is the desire to join a redistribution network to help people through bad times—crop failures, drought, etc. Still today, our fear of uncertainty and desire for stability and security create an imperative for growth. The Structure of Human Society Selects for Growth The psychological impetus toward growth results in what I consider the greatest growth-creating mechanism in human history: the peer-polity system. II. III.