Obama and the environment

Obama's complicated legacy on climate change - video. Vocabulary you MUST have for IELTS test band 8. Obama's climate change legacy is weakened by US investment in dirty fuel. President Barack Obama has staked his legacy on the environment, positioning his administration as the most progressive on climate change in US history. 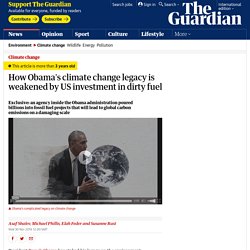 However, an obscure agency within his own administration has quietly spoiled his record by helping fund a steady outpouring of new overseas fossil fuel emissions – effectively erasing gains expected from his headline clean power plan or fuel efficiency standards. Since January 2009, the US Export-Import Bank has signed almost $34bn worth of low-interest loans and guarantees to companies and foreign governments to build, expand and promote fossil fuel projects abroad. That’s about three times more financing than the taxpayer-backed bank provided during George W Bush’s two terms, and almost twice the amount financed with loans and guarantees under the administrations of Ronald Reagan, George HW Bush and Bill Clinton – combined. Since 2009, it has financed 70 fossil fuel projects. How it works Greenhouse gas investments An uncertain future. 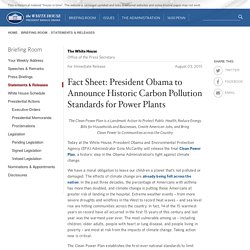 We have a moral obligation to leave our children a planet that’s not polluted or damaged. The effects of climate change are already being felt across the nation. In the past three decades, the percentage of Americans with asthma has more than doubled, and climate change is putting those Americans at greater risk of landing in the hospital. Extreme weather events – from more severe droughts and wildfires in the West to record heat waves – and sea level rise are hitting communities across the country. Related Links: Obama's clean power plan will hit shale gas share of electricity. The final version of the clean power plan has thrown the Obama administration into conflict with shale gas, America’s 21st-century energy darling. 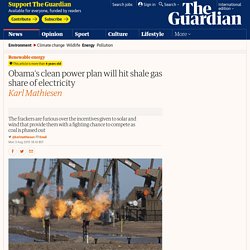 Coal, the most polluting source of electricity, has already entered a long twilight. Around a fifth of all US coal-fired plants are expected to shut between 2012 and 2020 and some analysts believe the hamstrung sector to be in ‘structural decline’. Should the clean power plan survive an anticipated blitzkrieg of legal and state government challenges, it will hasten this demise. The competition to replace coal plants as they shut down is fierce. Billions of dollars worth of generating income is at stake. For a brief moment in April and for the first time in history, gas deposed coal as the largest source of electricity in the country. But over the weekend, the administration announced changes designed specifically to give wind and solar a fighting chance.

The gas industry reacted furiously on Monday. The Irony Of President Obama's Oil Legacy. Full text of President Obama's speech on the Paris Climate Agreement. THE PRESIDENT: In my first inaugural address, I committed this country to the tireless task of combating climate change and protecting this planet for future generations. 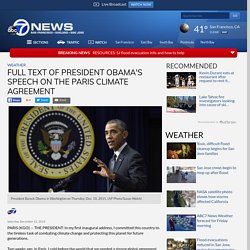 Two weeks ago, in Paris, I said before the world that we needed a strong global agreement to accomplish this goal -- an enduring agreement that reduces global carbon pollution and sets the world on a course to a low-carbon future. A few hours ago, we succeeded. We came together around the strong agreement the world needed. We met the moment. I want to commend President Hollande and Secretary General Ban for their leadership and for hosting such a successful summit, and French Foreign Minister Laurent Fabius for presiding with patience and resolve. I also want to thank the people of nearly 200 nations -- large and small, developed and developing -- for working together to confront a threat to the people of all nations.