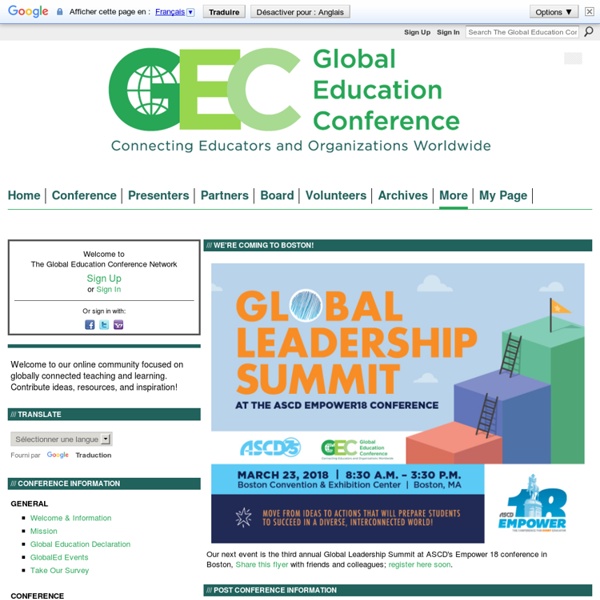 We are pleased to announce the fourth annual Global Education Conference, a free week-long online event bringing together educators and innovators from around the world, held Monday, November 18 through Friday, November 22, 2013 (Saturday, November 23rd in some time zones). The entire conference takes place online in webinar format. The Global Education Conference is a collaborative, inclusive, world-wide community initiative involving students, educators, and organizations at all levels. It is designed to significantly increase opportunities for connecting classrooms while supporting cultural awareness and recognition of diversity and educational access for all. Last year’s conference featured 400 general sessions and 20 keynote addresses from all over the world with over 13,000 participant logins. Click here for more information.

2012 Social Learning Summit Sessions & Schedule The recordings will be posted within a few hours of the close of the Summit HERE. Final time zone schedules for the 2012 Social Learning Summit are below. Click on your time zone to see the detailed schedule with links to enter each session. Conversation-enabled descriptions of each accepted session can be seen HERE. &quot;Street Haunting: A London Adventure,&quot; by Virginia Woolf - Classic British Essays In this essay by English novelist Virginia Woolf, the quest to buy a pencil serves as an occasion to contrast "street sauntering," with its sense of carefree wandering, with "street haunting," which hints at the more disturbing aspects of walking in the city. Be prepared to compare Woolf's essay with Charles Dickens's account of walking the streets of London, Night Walks. Street Haunting: A London Adventure

@MarsCuriosity: People’s Insights: Volume 1, Issue 29 What is @MarsCuriosity? @MarsCuriosity is the Twitter account of NASA’s latest robot rover on Mars. @MarsCuriosity burst into the spotlight as the NASA social media team live tweeted its successful landing on Mars on August 5/6, 2012. The times (for kids) The U.S. Open 2012 tennis tournament began with a bang on August 25 at Arthur Ashe Kids’ Day, the annual kickoff event at the Billie Jean King National Tennis Center in Flushing, NY. Honoring a Legend The event celebrates the life and legacy of Arthur Ashe, the first African-American male tennis player to win a Grand Slam title, at the U.S. Open, in 1968.

FrontPage You have arrived at the permanent landing page for EVO sessions. Note: If you cannot see all of the text on the right, click on the tiny arrow above the words Page History in the upper right corner to expand to Fullscreen View. Call for Participation Electronic Village Online (EVO) 2020 For five weeks in January and February, TESOL experts and participants from around the world engage in collaborative online discussions or hands-on virtual workshops of professional and scholarly benefit. These sessions bring together participants for a longer period of time than is permitted by land-based professional development conventions and allow a fuller development of ideas than is otherwise possible.

U B U W E B - Film &amp; Video: Robert Hughes - The Shock of the New (1982) Robert Hughes (1938-2012) The Shock of the New (1982) The Mechanical Paradise - Episode 1 Traces how developments in technology inspired art between 1880 and the end of WWI, leading to movements like cubism and futurism. The Powers that Be - Episode 2 Hughes explores the interplay between art and politics, seeing how artists were affected by the development of mechanised warfare and ideologies like fascism and communism. The Landscape of Pleasure - Episode 3 The French artists who attempted to reconcile man with nature, from the determination of the impressionists to paint outside to Matisse's vibrant use of colour.

CC license version 4.0: Helping meet the needs of open data publishers and users Over the last few months, Creative Commons has been working on the next version of its license suite, version 4.0. The goals of version 4.0 are wide-ranging, but the overall objective is clear: update the licenses so they are considerably more robust, yet easy to understand and use, for both existing communities and new types of users. A key community that version 4.0 aims to serve better are public sector agencies releasing data. Public sector information can be of great value, but the public needs to know what they can do with it. At the same time, public sector agencies need to be reassured that they can offer data in a way that gives them credit, maintains their reputation, and ensures some level of data integrity. Version 4.0 offers several updates in support of both open data publishers and users.

2.0 BE ON TIME! (if your child is tardy they will have to sit in the office until the next test begins) Go to bed as early as possible (GET LOTS OF SLEEP!) T