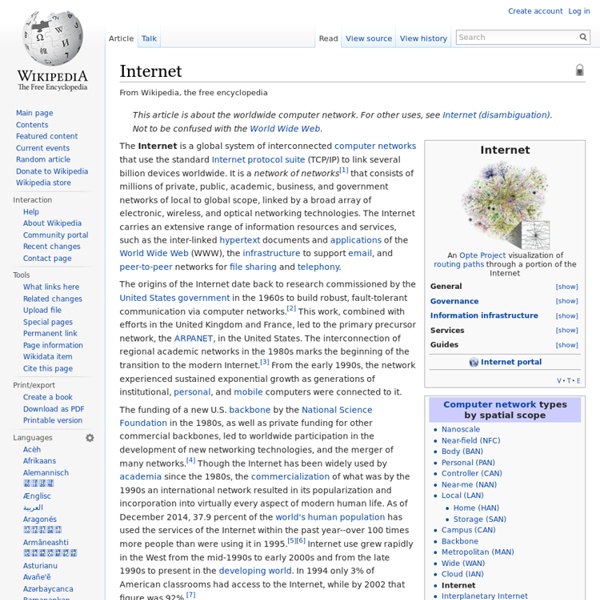 U.S. Army soldiers "surfing the Internet" at Forward Operating Base Yusifiyah, Iraq The Internet is a global system of interconnected computer networks that use the standard Internet protocol suite (TCP/IP) to link several billion devices worldwide. It is a network of networks[1] that consists of millions of private, public, academic, business, and government networks of local to global scope, linked by a broad array of electronic, wireless, and optical networking technologies. The Internet carries an extensive range of information resources and services, such as the inter-linked hypertext documents and applications of the World Wide Web (WWW), the infrastructure to support email, and peer-to-peer networks for file sharing and telephony. Most traditional communications media, including telephony and television, are being reshaped or redefined by the Internet, giving birth to new services such as voice over Internet Protocol (VoIP) and Internet Protocol television (IPTV). Terminology Users

How To Enable FTP Server on Mac OS X Lion - Tony de Jesus One of the most notable changes (at least for developers) on Mac OS X Lion is the removal of FTP from the available protocols in System Preference’s File Sharing. Probably this is due to fact that FTP is a protocol that provides little or no security. However, in a development and testing environment, it is often convenient to have a local FTP server. In this post I’ll show you how to enable/disable the FTP Server on Lion by using the Terminal. As you can see in the image below, the FTP option in System Preferences interface is no longer available: Shifting from a Patriarchal to an Earth Centric Paradigm Earth Centric Paradigm: The polarity of extremist views continues to increase. Fundamentalists tend to blame academics/liberals, claiming we must put God back as central to our government. The mainstream seem to accuse talk radio and the 24/7 news media, with MSNBC and Fox News whipping hysteria into the right and left wings of our two-party system. Conspiracy theorists and others point toward fiscal elitists using the divide and conquer method to keep the public at each other's throats instead of uniting against them. The polarity of right vs. left, fundamentalism vs. existentialism is hardly restricted to the United States, it is a global phenomenon. Deep impact we as a species are creating our own deep impact.

Internet censorship Internet censorship is the control or suppression of what can be accessed, published, or viewed on the Internet. It may be carried out by governments or by private organizations at the behest of government, regulators, or on their own initiative. Individuals and organizations may engage in self-censorship for moral, religious, or business reasons, to conform to societal norms, due to intimidation, or out of fear of legal or other consequences.[1] The extent of Internet censorship varies on a country-to-country basis. While most democratic countries have moderate Internet censorship, other countries go as far as to limit the access of information such as news and suppress discussion among citizens.[1] Internet censorship also occurs in response to or in anticipation of events such as elections, protests, and riots. An example is the increased censorship due to the events of the Arab Spring.

Linux Linux ( History[edit] Antecedents[edit] With AT&T being required to license the operating system's source code to anyone who asked (due to an earlier antitrust case forbidding them from entering the computer business),[23] Unix grew quickly and became widely adopted by academic institutions and businesses. Windows 7 Windows 7 was primarily intended to be an incremental upgrade to the operating system, intending to address criticisms faced by its predecessor, Windows Vista (such as performance improvements), whilst maintaining compatibility with hardware and software designed for Vista. While retaining a similar appearance to Vista, 7's interface was streamlined, with the addition of a redesigned taskbar that allows applications to be "pinned" to it, and new window management features. Other new features were added to the operating system, including libraries, the new file sharing system HomeGroup, and support for multitouch input. A new "Action Center" interface was also added to provide an overview of system security and maintenance information, and tweaks were made to the User Account Control system to make it less intrusive. 7 also shipped with updated versions of several stock applications, including Internet Explorer, Windows Media Player, and Windows Media Center. Development history[edit]

Salman Rushdie on Paris attack: Religion a ‘medieval form of unreason’ that deserves ‘fearless disrespect’ Don't miss stories. Follow Raw Story! Author Salman Rushdie — who had a fatwa placed on his head after publishing The Satanic Verses in 1988 — made a statement today about the attack on the Paris office of Charlie Hebdo that left 12 people dead. On Twitter, he wrote:

Music This article is about music as a form of art. For history see articles for History of music and Music history. The creation, performance, significance, and even the definition of music vary according to culture and social context. Music ranges from strictly organized compositions (and their recreation in performance), through improvisational music to aleatoric forms. Music can be divided into genres and subgenres, although the dividing lines and relationships between music genres are often subtle, sometimes open to personal interpretation, and occasionally controversial. Within the arts, music may be classified as a performing art, a fine art, and auditory art.

Keyboard shortcuts This article lists keyboard shortcuts in Mozilla Firefox. If you have enabled Emacs-style text editing shortcuts in GNOME, they will also work in Firefox. When an Emacs text editing shortcut conflicts with the default shortcuts (as occurs with Ctrl+K), the Emacs shortcut will take precedence if focus is inside a text box (which would include the location bar and search bar). In such cases you should use the alternate keyboard shortcut if one is listed below. For mouse shortcuts, see this article. Note: You can customize keyboard shortcuts for Firefox using the Saka key extension. theconversation In 1959, the British physicist and novelist C.P. Snow delivered a famously controversial lecture at Cambridge University. He described a post-war schism between two groups — scientists and the literary world.

SliTaz SliTaz GNU/Linux is a light-weight, community-based Linux distribution suitable for use on older hardware or as a Live CD or Live USB.[3][4][5][6] System requirements[edit] SliTaz GNU/Linux is supported on all machines based on the i486 or x86 Intel compatible processors.[2] The Live CD has four variants of SliTaz, requiring from 192 MB of RAM for the Core system to 48 MB for a text mode and X Window System.[2] Slitaz can even run in 16 megabytes of RAM and a little swap memory. [7] SliTaz can be booted from a Live CD, Live USB, floppy disk, or a local area network,[8] or can be installed, requiring approximately 100 MB of hard disk space.[9]