Quakes, mudslides, an active volcano: inside the world's riskiest city. On the evening of 13 November 1985, Luz Estrella Arías was at home with her young daughter in Rio Claro, a hamlet in Caldas in the heart of Colombia’s coffee region. 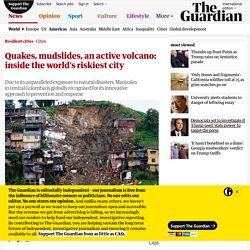 When she heard the roar, at first she thought it was a truck overturning. Then she heard the screams. “My first instinct was to stay in the house,” she says. “My husband had a prize cockerel that we couldn’t afford to lose. But then the water started coming in, so I grabbed my daughter and stepped outside. Arías was fortunate; her house was higher up the slopes of Rio Claro. On the volcano’s eastern side, however, the damage was catastrophic. Sprawled over a series of mountain ridges in the shadow of Nevado del Ruiz, this urban area faces a panoply of natural disaster risks that are unlikely to be matched anywhere else in the world. The city’s 400,000 citizens have learned to live with their precarious situation. Manizales has become a global reference for disaster-risk reduction.

Complacency is the enemy. Earthquake Information. Grinding poverty and tectonic volatility make a devastating combination. Haiti was a humanitarian disaster even before the earthquake hit. 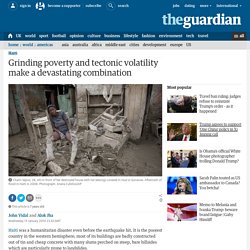 Forgiveness for Haiti? We should be begging theirs. If we are to believe the G7 finance ministers, Haiti is on its way to getting something it has deserved for a very long time: full "forgiveness" of its foreign debt. 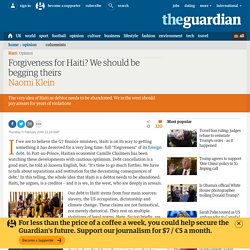 In Port-au-Prince, Haitian economist Camille Chalmers has been watching these developments with cautious optimism. Debt cancellation is a good start, he told al-Jazeera English, but: "It's time to go much further. We have to talk about reparations and restitution for the devastating consequences of debt. " In this telling, the whole idea that Haiti is a debtor needs to be abandoned.

How Haiti hopes to break the cycle of disaster: restoring its lost forests. Deep gashes in the steep mountains around Gonaïves are the claw marks of the disasters that strike this north-western coastal city with deadly regularity. 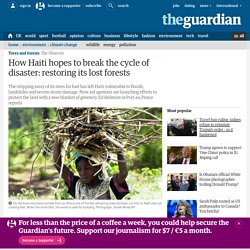 They are also Haiti's stigmata: the wounds of a nation caused by the near-complete deforestation of a land that was once a rich tropical habitat. But after a hurricane season in which this, the poorest nation in the western hemisphere, was struck by four intense storms triggering flash floods and landslides that took hundreds of lives and created tens of thousands of refugees, richer nations are again being asked to help a country often described as beyond hope. So far, the call for aid has fallen on mainly deaf ears.

The UN appealed for $108m in emergency aid after Gonaïves and another town, Cabaret, were buried under millions of tons of mud, sewage and rock after being hit by storms from mid-August to mid-September. But so far only 40 per cent of that target has been met. One solution comes from close to home. Haiti death toll rises to 842 after Hurricane Matthew, reports say. The number of people killed in Haiti by the devastating effects of Hurricane Matthew was reported by Reuters to have risen as high as 842 on Friday as rescue workers and aid agencies battled to reach remote areas of the country, assess the damage and deliver relief. 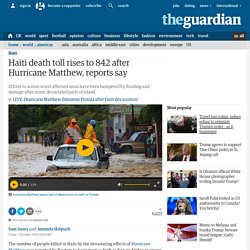 The hurricane, which hit Haiti on Tuesday, brought 145mph winds and torrential rains that destroyed more than 3,200 homes, displaced 15,000 people, ruined plantations and drowned animals. With communications still down in many of the worst-affected areas, it will take days before a definitive death toll can be established. Hurricane Matthew: preparations and aftermath – in pictures. Why is Haiti vulnerable to natural hazards and disasters? How hurricanes in Haiti have left hundreds dead and a country drowning. When four huge storms struck this summer, one after another in the space of 30 days, Haiti never stood a chance. 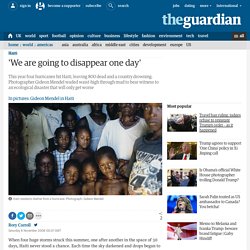 Each time the sky darkened and drops began to fall, it took just hours for torrential downpours to soften hillsides into sludge and send mounds of slick, wet earth crashing into homes. Survivors scrambled on to roofs and watched helplessly as others perished in one of the Caribbean's worst disasters of recent years. The four tropical storms, ending with September's Hurricane Ike, turned Haiti into a wasteland. Nearly 800 people died, about 60% of the country's harvest was destroyed and entire cities were rendered desolate and uninhabitable. Life in the western hemisphere's poorest country went from grim to desperate. Haiti's Hurricane History. The catastrophic earthquake of 2010 is only the latest--and worst--natural disaster to devastate the nation of Haiti. 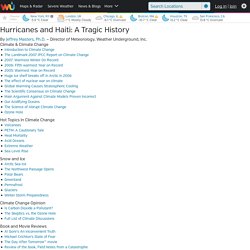 Up until the quake, the hurricane season of 2008 was the cruelest natural disaster ever experienced in Haiti. Four storms--Fay, Gustav, Hanna, and Ike--dumped heavy rains on the impoverished nation. The rugged hillsides, stripped bare of 98% of their forest cover thanks to deforestation, let flood waters rampage into large areas of the country. Particularly hard-hit was Gonaives, the fourth largest city. According to reliefweb.org, Haiti suffered 793 killed, with 310 missing and another 593 injured. The year 2008 was only one of many years hurricane have brought untold misery to Haiti. Why does Haiti suffer a seemingly disproportionate number of natural disasters? What can be done to reduce these human-worsened natural disasters? Organizations Active in Haitian Relief Efforts: Reasons Behind Haiti’s Poverty. Long before the biggest natural disaster in Haiti's history shook Port-au-Prince on the afternoon of Jan. 12, the Caribbean nation of 10 million struggled to feed and shelter its expanding population. 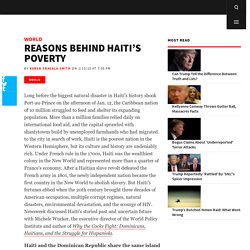 More than a million families relied daily on international food aid, and the capital sprawled with shantytowns build by unemployed farmhands who had migrated to the city in search of work.