How Many Gigatons of CO2? 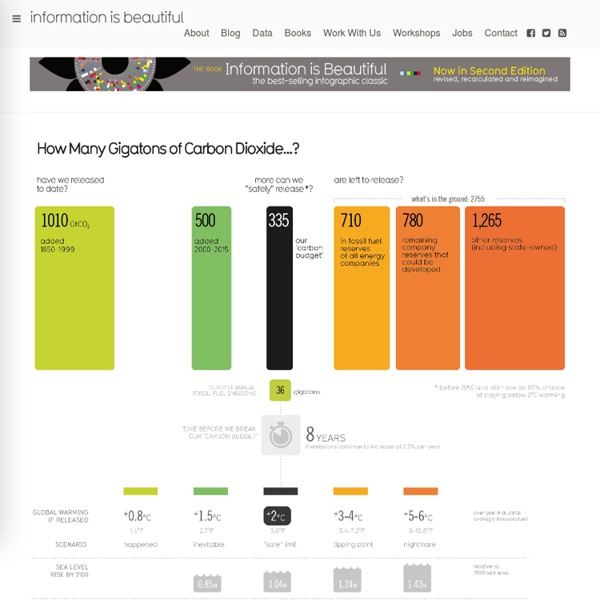 Related:  know about world • Technology /Future • Environment • Contemporary History • You may be in Danger

Glyphosate Found in Human Urine Across Europe People in 18 countries across Europe have been found to have traces of the weed killer glyphosate in their urine, show the results of tests commissioned by Friends of the Earth Europe and released today. Source: foeeurope.org The findings raise concerns about increasing levels of exposure to glyphosate-based weed killers, commonly used by farmers, public authorities and gardeners across Europe. The use of glyphosate is predicted to rise further if more genetically modified (GM) crops are grown in Europe [2]. The Deep History of the Radical Right’s Stealth Plan for America Charles Koch, 79, in his office at Koch Industries in Wichita, Kansas, on July 29, 2015. (Photo by Nikki Kahn/The Washington Post via Getty Images) Author Nancy MacLean has unearthed a stealth ideologue of the American right. Her book, Democracy in Chains: The Deep History of the Radical Right’s Stealth Plan for America, tells the story of one James McGill Buchanan, a Southern political scientist and father of “public choice economics.” MacLean details how this little-known figure has had a massive impact on the ideology of the far right. None other than Charles Koch looked to MacLean’s theories for inspiration.

Allan Savory’s key concepts: an infographic cheat sheet Environment Let’s unite as Team Humanity to revive degraded land: A conversation with TED Books author Allan Savory and rancher Gail Steiger All over the world, land is turning into desert at an alarming rate. Biologist Allan Savory has dedicated a lifetime to figuring out what’s causing this “desertification.”

The Tribune Sinclair Merger Will Be a Conservative Local News Empire Can Anyone Stop Trump’s FCC From [...] Rupert Murdoch, executive chairman of News Corp, on May 4, 2017 in New York. (Brendan Smialowski/AFP/Getty Images) Many Earth-Like Planets Have Climates Too Hot for Life Charles Q. Choi An alien planet climate analysis cuts nearly in half the estimated number of habitable planets in our galaxy, scientists reported on Wednesday. The findings arise from a new 3-D computer model that reveals the climates of other worlds may be warmer than researchers expected. Over the past two decades, the discovery of hundreds of planets orbiting nearby stars has bolstered speculation that some might be home to life as we know it. Since there is life virtually wherever there is liquid water on Earth, the search for extraterrestrial life is especially focused on worlds in the so-called "habitable zones" of stars, where temperatures are just right—not too hot and not too cold—for seas of liquid water to exist.

Monsanto Buys Up Heirloom Seed Suppliers The NM Tree and Garden Center located in Rio Rancho, New Mexico has discovered that Monsanto is buying heirloom seed companies. They are also buying the trademarks to a number of heirloom seeds. This means that you may think you are supporting an heirloom seed company but in reality the company is owned by Monsanto. The seeds themselves are still non-GMO and heirloom and they can be saved at the end of the harvest and resown next season, but you are still giving money to Monsanto. Monsanto are also buying trademarks so that no matter where you buy certain seeds, they get money from it. Here is a LINK to the trademarks and seed companies Monsanto supply and ones that they do not supply in the USA.

Is our Sun falling silent? "I've been a solar physicist for 30 years, and I've never seen anything quite like this," says Richard Harrison, head of space physics at the Rutherford Appleton Laboratory in Oxfordshire. He shows me recent footage captured by spacecraft that have their sights trained on our star. The Sun is revealed in exquisite detail, but its face is strangely featureless. "If you want to go back to see when the Sun was this inactive... you've got to go back about 100 years," he says.

Water scarcity could affect 5 billion people by 2050 A new report claims that half of the world’s population may struggle to quench its thirst in the coming decades. The news: UNESCO’s new World Water Development Report says that 3.6 billion people currently live in places that can suffer from water scarcity for at least one month of the year. It projects that the figure will rise to five billion—half of the world’s predicted 10 billion population—by 2050. The problem: More and more demands are being placed on the water cycle by industry, agriculture, and a growing population. At the same time, climate change is exacerbating the problem by causing extreme drought and floods, often making arid regions even drier—and we're not doing enough to solve that problem. The solution: Might not be entirely technologocial.

World Water Day 2018: Facts And Quotes To Share To Raise Awareness Thursday is World Water Day, an annual celebration initiated by the United Nations to raise awareness about water scarcity and how to preserve and use it safely. Even though water covers almost three-fourths of the Earth’s surface, there are many regions that are severely deprived of it. "The theme for World Water Day 2018 is ‘Nature for Water’ – exploring nature-based solutions to the water challenges we face in the 21st century," according to the official website. Doctors Warn Climate Change Threatens Public Health Growing up in southwestern Pennsylvania, Patrice Tomcik had never heard of Lyme disease — an infectious, flu-like illness transmitted by ticks. But in the last few years, five of her friends have caught it, she's had to have her dog vaccinated and she regularly finds herself pulling ticks off her children. It can be disconcerting, she said, having to worry about an illness that she had never been exposed to in the past.