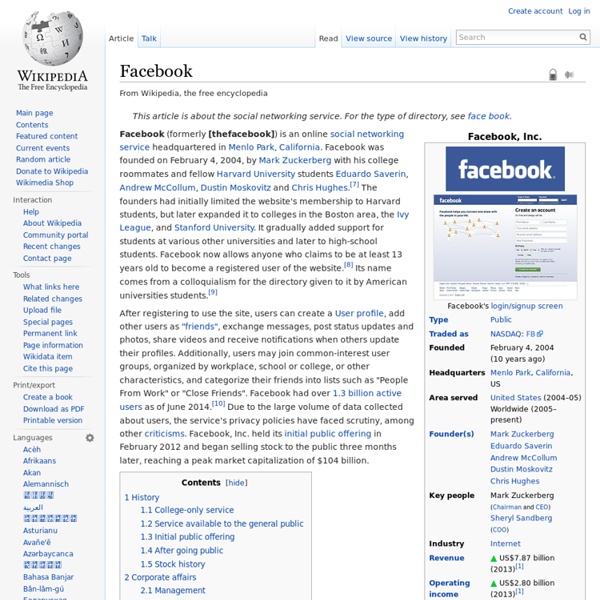 This article is about the social networking service. For the type of directory, see face book. Facebook (formerly [thefacebook]) is an online social networking service headquartered in Menlo Park, California. Facebook was founded on February 4, 2004, by Mark Zuckerberg with his college roommates and fellow Harvard University students Eduardo Saverin, Andrew McCollum, Dustin Moskovitz and Chris Hughes.[7] The founders had initially limited the website's membership to Harvard students, but later expanded it to colleges in the Boston area, the Ivy League, and Stanford University. It gradually added support for students at various other universities and later to high-school students. Facebook now allows anyone who claims to be at least 13 years old to become a registered user of the website.[8] Its name comes from a colloquialism for the directory given to it by American universities students.[9] History College-only service Service available to the general public Initial public offering

LinkedIn LinkedIn /ˌlɪŋkt.ˈɪn/ is a business-oriented social networking service. Founded in December 2002 and launched on May 5, 2003,[3] it is mainly used for professional networking. In 2006, LinkedIn increased to 20 million viewers.[7] As of June 2013[update], LinkedIn reports more than 259 million acquired users in more than 200 countries and territories.[2][8] History[edit] LinkedIn's CEO is Jeff Weiner,[2] previously a Yahoo! Inc. executive. Twitter (Wikipedia) History Creation and initial reaction Twitter's origins lie in a "daylong brainstorming session" held by board members of the podcasting company Odeo. Dorsey, then an undergraduate student at New York University, introduced the idea of an individual using an SMS service to communicate with a small group.[15][16] The original project code name for the service was twttr, an idea that Williams later ascribed to Noah Glass,[17] inspired by Flickr and the five-character length of American SMS short codes.

TED (conference) TED (Technology, Entertainment, Design) is a global set of conferences owned by the private non-profit Sapling Foundation, under the slogan "ideas worth spreading". TED was founded in 1984 as a one-off event.[1] The annual conference began in 1990, in Monterey, California.[4] TED's early emphasis was technology and design, consistent with its origins in the Silicon Valley. Since June 2006,[1] the talks have been offered for free viewing online, under Attribution-NonCommercial-NoDerivs Creative Commons license, through TED.com.[8] As of April 2014, over 1,700 talks are available free online.[9] By January 2009 they had been viewed 50 million times. In June 2011, the viewing figure stood at more than 500 million,[10] and on Tuesday, November 13, 2012, TED Talks had been watched one billion times worldwide.[11] TED's mission statement begins:

Prezi Prezi is a cloud-based (SaaS) presentation software and storytelling tool for presenting ideas on a virtual canvas.[1][2][3][4][5] The product employs a zooming user interface (ZUI), which allows users to zoom in and out of their presentation media, and allows users to display and navigate through information within a 2.5D or parallax 3D space on the Z-axis. Prezi was officially established in 2009 by co-founders Adam Somlai-Fischer, Peter Halacsy and Peter Arvai. History[edit] SlideShare The website gets an estimated 58 million unique visitors a month,[7] and has about 16 million registered users.[citation needed] SlideShare was voted among the World's Top 10 tools for education & e-learning in 2010.[8][9] SlideShare's biggest competitors include Scribd.com, Issuu and Docstoc. Some of the notable users of SlideShare include The White House, NASA, World Economic Forum, State of Utah, O'Reilly Media, Hewlett Packard and IBM.

Getting Things Done The GTD method rests on the idea of moving planned tasks and projects out of the mind by recording them externally and then breaking them into actionable work items. This allows attention to be focused on taking action on tasks, instead of recalling them.[2] First published in 2001, a revised edition of the book was released in 2015 to reflect the changes in information technology during the preceding decade. Themes[edit] Allen first demonstrates stress reduction from the method with the following exercise, centered on a task that has an unclear outcome or whose next action is not defined.