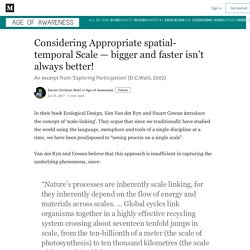 Agriculture vs Nature! Superbe image... - Podologie Equine Libre. We Need an Ecological Civilization Before It’s Too Late – Patterns of Meaning. In the face of climate breakdown and ecological overshoot, alluring promises of “green growth” are no more than magical thinking. 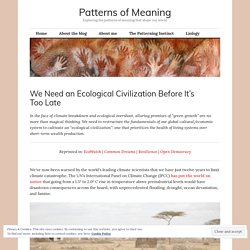 We need to restructure the fundamentals of our global cultural/economic system to cultivate an “ecological civilization”: one that prioritizes the health of living systems over short-term wealth production. Reprinted in: EcoWatch | Common Dreams | Resilience | Open Democracy. Native Knowledge: What Ecologists Are Learning from Indigenous People. How ancient wisdom can help us adapt to climate change. Alice Moynihan Extreme weather has become the norm across the globe, in large part thanks to climate change, and it’s playing havoc with farmers and ranchers who depend on predictable weather to grow our food. 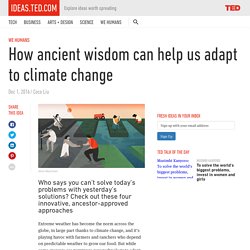 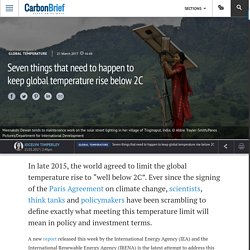 Ever since the signing of the Paris Agreement on climate change, scientists, think tanks and policymakers have been scrambling to define exactly what meeting this temperature limit will mean in policy and investment terms. A new report released this week by the International Energy Agency (IEA) and the International Renewable Energy Agency (IRENA) is the latest attempt to address this question. Commissioned by the German government in its role this year as G20 president, the report sets out the “essential elements” needed to create an energy sector transition consistent with the Paris Agreement. The G20 is a group of 20 major economies, including China, India, Germany, the UK and US, which accounts for 63% of global population and 83% of emissions.

Scientists made a detailed “roadmap” for meeting the Paris climate goals. It’s eye-opening. Back in 2015, the world’s governments met in Paris and agreed to keep global warming below 2°C, to avoid the worst risks of a hotter planet. 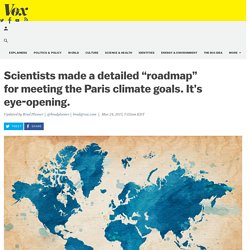 See here for background on why, but that’s the goal. For context, the planet’s warmed ~1°C since the 19th century.

Brace yourself, the polar vortex is shifting. Climate change has hit the Arctic worse than ever over the past few years, but that doesn't mean the Northern Hemisphere is going to be experiencing a mild winter this year. 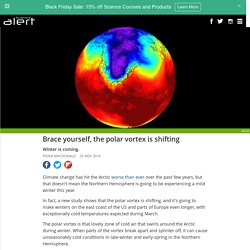 In fact, a new study shows that the polar vortex is shifting, and it's going to make winters on the east coast of the US and parts of Europe even longer, with exceptionally cold temperatures expected during March. The polar vortex is that lovely zone of cold air that swirls around the Arctic during winter. When parts of the vortex break apart and splinter off, it can cause unseasonably cold conditions in late-winter and early-spring in the Northern Hemisphere. This happened in early 2014 - as you can see in the satellite image above - and caused an extreme weather event in the northern US and Canada. Warning of Global Havoc as Possible Arctic 'Tipping Points' Pile Up. What is happening in the Arctic will not stay in the Arctic. 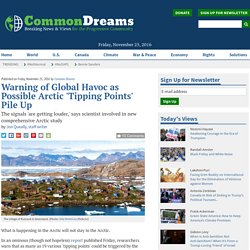 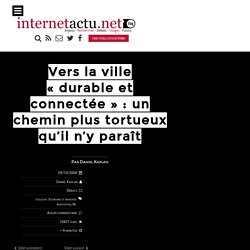 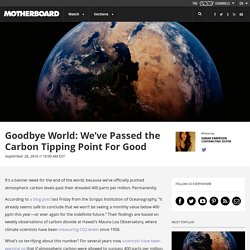 Permanently. According to a blog post last Friday from the Scripps Institution of Oceanography, “it already seems safe to conclude that we won’t be seeing a monthly value below 400 ppm this year—or ever again for the indefinite future.” Their findings are based on weekly observations of carbon dioxide at Hawaii’s Mauna Loa Observatory, where climate scientists have been measuring CO2 levels since 1958. What’s so terrifying about this number? For several years now, scientists have been warning us that if atmospheric carbon were allowed to surpass 400 parts per million, it would mark a serious “milestone.” Gulf Stream is slowing down faster than ever, scientists say.

The Gulf Stream that helps to keep Britain from freezing over in winter is slowing down faster now than at any time in the past millennium according to a study suggesting that major changes are taking place to the ocean currents of the North Atlantic. 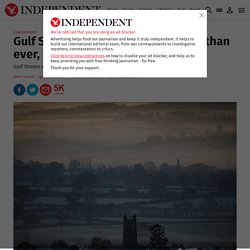 Flooding Risk From Climate Change, Country by Country. More than a quarter of Vietnam’s residents live in areas likely to be subject to regular floods by the end of the century. Four percent of China’s residents — 50 million people — live in the same kind of areas. Across the globe, about one person in 40 lives in a place likely to be exposed to such flooding by the end of the century, absent significant changes. These figures are the result of a new analysis of sea levels and flood risk around the world, conducted by Climate Central and based on more detailed sea-level data than has previously been available. The analysis offers country-by-country estimates for populations at risk of regular flooding, accounting for a range of potential emissions reductions and for variations of sea level sensitivity to climate change.

Globally, eight of the 10 large countries most at risk are in Asia. What-if-carbon-dioxide-was-pink. Written by Gregg Kleiner. Here’s one dads desperate attempt to slow climate change by thinking pink… Unexpectedly Widespread Permafrost Melting Could Set Off A Greenhouse Gas Timebomb. Beneath much of the Arctic resides vast stores of greenhouse gases, locked up for millennia in icy soils.

With this in mind, a pair of studies provides a double whammy of bad news: Not only are these frozen reservoirs thawing out more extensively than previously thought, but at this stage, there’s little that can be done about it. Carbon dioxide and methane are indubitably the two most potent greenhouse gases. Vast reservoirs of both exist within the world’s permafrost, which is hydrated soil that has remained below the freezing point for two or more years.

Worldometers - real time world statistics. David Suzuki "Time is Running Out: Ecology or Economics?" THE SAGAN SERIES - The Pale Blue Dot. Companies & Organizations. Forward, 26° FORWARD is an enterprise creating a positive future for our planet. Paul Stamets: 6 ways mushrooms can save the world. If Everyone Lived in an 'Ecovillage', the Earth Would Still Be in Trouble. Pencils, Pixels and the pursuit of Awesomeness. THIS EXAMPLE SHOWS A traditional walk cycle animation where each frame is drawn completely by hand. Äntligen börjar vi (några av oss) förstå framtiden! Forskare: Ny mini-istid kan vara på väg hit. Is our Sun falling silent? CO2, birth & death rates by country, simulated real-time. ENOUGHNESS: Restoring Balance to the Economy in the Most Awesome Way Ever.

Usir.salford.ac.uk/15993/1/People_watching_nature_-_umwelt.pdf. Monsanto-gmo-do-not-buy.jpg (500×800) Everything Petroleum Does, Hemp Does Better. This Is Why I’m Afraid Of My Couch. Here is my manifesto for rewilding the world. Decline of bees forces China's apple farmers to pollinate by hand. Home - HumanCoral. Environment/Ecology. Alternative Socio-economic systems.