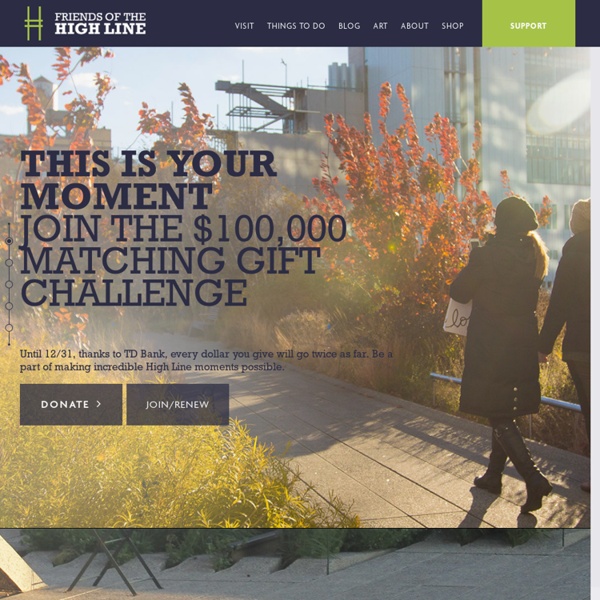 A new High Line Billboard, Shelf Still Life by artist Jonas Wood, is on view at West 18th Street and 10th Avenue. Wood's work depicts a group of potted plants arranged on a shelf. The plants’ lush green leaves and bright colors of the pots contrast with the neutral hues of the surrounding winter brush, acting as a reminder of the greenery that populates the elevated park in warmer months. Shelf Still Life, the thirteenth installment on High Line Billboard, will be up through February 3.

This man built a floating solar-powered fortress made out of 150,000 recycled water bottles Off the cost of Isla Mujeres Bay in Cancun, Mexico, environmentalist and architect Richart Sowa lives comfortably on his island made of over 150,000 recycled water bottles. Sowa first built his floating abode in 2005, but harsh weather destroyed the island. On his third attempt of rebuilding his home— this time in calm waters—he succeeded in developing a sturdy home. He has been living almost completely self-sustainably on his private island since 2008. the Rotterdam Collective The Rotterdam Collective is a new concept for interdisciplinary collaboration in the heart of Rotterdam, focused on environmentally and socially innovative projects in its local community. Its unique structure allows Ro-Co to develop a wide variety of multidisciplinary projects. All members have their own, independent entrepreneurial functions, but also have the opportunity to participate in larger projects in synergistic teams. These larger projects are actively solicited by the collective's members. Currently the collective holds about 20 companies, from small and young to large and established, and 10 external members.

Chelsea-The High Line Elevated Visions July 11, 2004 By JULIE V. IOVINE Proposals for the High Line THE High Line is an abandoned 1.5-mile stretch of overgrown railroad viaduct that runs from the Meatpacking district to Hell's Kitchen — and straight into the imaginations of a growing number of New Yorkers who see it as proof that, even in an urban jungle, the forces of nature are still at work. The idea to turn the old freight route, once condemned to demolition, into a public park has gained momentum over the past five years, culminating in a design competition that attracted 52 entries. UN-HABITAT Adopts First-Ever Resolution on Public Spaces Resolution Requests UN-HABITAT’s Executive Director to Ensure the Application of Place-Making Internationally April 15, 2011- Nairobi, Kenya The Governing Council of UN-HABITAT (United Nations Human Settlement Programme) has adopted the first-ever public space resolution which urges the development of a policy approach for the international application of Placemaking. The resolution, adopted during its 23rd Session, “requests the Executive Director, in collaboration with Habitat Agenda partners…to develop a policy approach on the role that place-making can play in meeting the challenges of our rapidly urbanizing world, to disseminate that policy and its results widely and to develop a plan for ensuring its application internationally…”

Garrison Point Fort - Garrison Point Fort at Sheerness was built as a result of the Royal Commision of 1860,which reviewed national defences of Britain in case of an attack by France. In 1869 there was a second Commison to report on the progress of defence work carried out by the first Commision. By 1872 Garrison Point Fort had been constructed on the site of the former Half Moon Battery and Cavalier Battery. The Fort was built to defend the entrance of the River Medway and the Royal Dockyards of Sheerness and Chatham.

from pond to cup - UWE project resolves global clean water crisis Issue date: 16 January 2014 flickr photo gallery Researchers at UWE Bristol have developed a portable and mobile water treatment system capable of delivering clean drinking water at source. The system has been developed for use in remote or undeveloped areas of the world to provide clean water for disaster relief and humanitarian emergencies. Such technology could help transform the lives of people who currently have no access to clean drinking water. A modest garden shed located next to a pond located on the main University campus is the focus for the research.

Christo's Gates A Filmmaker's 50 Years of Reassuring Intimacy By KATHRYN SHATTUCK The scene left a lot to the imagination. On a sun-drenched day last week in Central Park, the only evidence of "The Gates," New York City's biggest public art project ever, was several thousand dark steel bases poking through a layer of snow. But for the 78-year-old filmmaker Albert Maysles, whose mission it has been to record a quarter-century of work on the project by the artists Christo and Jeanne-Claude, the site had potential. The saffron-colored panels that will billow across 23 miles of park footpaths will not be unfurled until Saturday, but 11 days in advance, Mr. Detroit Leads the Way on Place-Centered Revitalization Future plans for Cadillac Square call for a lively marketplace / Image: PPS You may have heard about downtown Detroit’s big comeback story. Campus Martius has become one of America’s great urban squares. Demand for housing has outstripped supply for months. Major tech firms like Twitter are opening up offices in refurbished historic buildings.

Elmley School House Elmley School House can be found at the end of a strip of overgrown land on the Isle of Elmley. The strip of land is all that remains of the original Elmley Village surrounded by a clear landscape of protected marshes. The school house was constructed in 1885 by the University of Oxford and was to hold up to 86 children however in 1908 it had only 6 pupils. Due to the villages decline the school house was eventually deserted and now remains as a derelict and dangerous building. Exxon: The Road Not Travelled - Inside Cllimate News In 1981, 12-year-old Laura Shaw won her seventh-grade science fair at the Solomon Schechter Day School in Cranford, N.J. with a project on the greenhouse effect. For her experiment, Laura used two souvenir miniatures of the Washington Monument, each with a thermometer attached to one side. She placed them in glass bowls and covered one with plastic wrap – her model of how a blanket of carbon dioxide traps the reflected heat of the sun and warms the Earth.

Why Cities Can't Afford to Lose Their Artists The Art Basel Miami Beach art fair kicks off this week, an event that drew 75,000 people and 140 international museum and international groups in 2013. The art fair is widely credited with kick-starting the economic resurgence of the Miami area, so it seems like a good time to ask: What do we really know about the role of art in the city? Does it help to drive economic growth and development or does it contribute to gentrification? Are leading edge arts clusters found just in big cities, like New York and Los Angeles, or can they spread to smaller and medium sized ones as well? A recent study published in the journal Urban Studies takes a close look at the connection between the arts and city building.

Harty Bunker At the bottom of Harty Ferry Road there is a small bunker, it is just past Harty Ferry Inn on the right as you look towards the river. The shelter has two rooms in the bunker, a small cubical for the toilet and the main room. It has a blast protected entrance and an escape shaft in the far corner with a ladder to the roof.