It’s only August – and we’ve already used up all of this year’s resources. 'Pristine' landscapes haven't existed for thousands of years due to human activity. 'Pristine' landscapes simply do not exist anywhere in the world today and, in most cases, have not existed for at least several thousand years, says a new study in the journal, Proceedings of the National Academy of Sciences (PNAS). 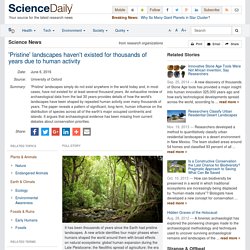 An exhaustive review of archaeological data from the last 30 years provides details of how the world's landscapes have been shaped by repeated human activity over many thousands of years. It reveals a pattern of significant, long-term, human influence on the distribution of species across all of the earth's major occupied continents and islands. The paper by lead author Dr Nicole Boivin from the University of Oxford and Max Planck Institute for the Science of Human History, with researchers from the UK, US, and Australia, suggests that archaeological evidence has been missing from current debates about conservation priorities. Uk.businessinsider. 2010 0036 eng. Valuing Nature: Q&A with Gretchen Daily. Science superstar (and my friend) Gretchen Daily works with leaders who don’t just view saving nature as a way to manage risk—they realize it’s one of the smartest investments they can make. 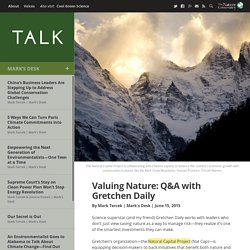 Gretchen’s organization—the Natural Capital Project (Nat Cap)—is equipping decision-makers to back initiatives that benefit both nature and the economy at the same time. Nat Cap—a partnership among the Nature Conservancy, Stanford, the University of Minnesota and WWF—develops practical approaches for valuing nature (that are available as free software) and works with governments, businesses, NGOs and community groups to make things happen. Sustainability: Game human nature. Illustration by Greygouar Hundreds of studies in behavioural economics and other social sciences, conducted over the past few decades, have established that people often make choices that take into account the well-being of others. 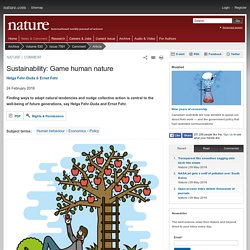 This contradicts an assumption held over centuries that people exclusively pursue their own material well-being. It also offers hope for the prospect of developing public goods (see ‘Glossary: behavioural economics’) that will benefit future generations. Glossary: Behavioural economics However, another body of evidence, gathered over the past two or three decades, indicates that people display an array of other tendencies, such as giving excessive weight to current benefits over future ones. The message emerging is that sustainable development will require the design of policies and schemes that specifically take advantage of some of our natural tendencies, and mitigate others. Six tendencies What does it mean to care about future generations? Economics: Current climate models are grossly misleading. Jonas Bendiksen/Magnum Sathkira District, Bangladesh, still flooded a year after 2009's Cyclone Aila. 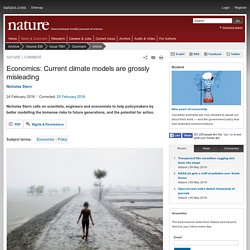 The twin defining challenges of our century are overcoming poverty and managing climate change. If we can tackle these issues together, we will create a secure and prosperous world for generations to come. If we don't, the future is at grave risk. Researchers across a range of disciplines must work together to help decision-makers in the public, private and non-profit sectors to rise to these challenges. As the 2015 Paris agreement on climate change made clear, we must achieve a net-zero carbon economy this century. Current economic models tend to underestimate seriously both the potential impacts of dangerous climate change and the wider benefits of a transition to low-carbon growth. Dark impacts The IPCC pointed out1 that estimates of losses resulting from a 2 °C increase in mean global temperature above pre-industrial levels ranged from 0.2% to 2% of global gross domestic product.

San Francisco Flood Vulnerability: A Health Focused Assessment. The social fabric of a community contributes to one’s ability to prepare, adapt and respond to extreme storms and flooding. 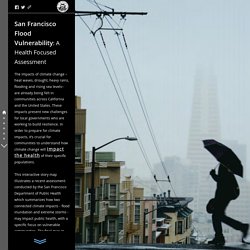 Social vulnerability indicators, captured by demographic and socio-economic characteristics, determine how different population groups will be more or less vulnerable to extreme storms and flooding. Click on each of the indicators below to view the corresponding map. Children are more likely to suffer from respiratory illness, malnutrition, exhaustion, and require specialized items such as formula or diapers that may not be readily available following an extreme storm or flood event.

Children are also particularly vulnerable to mental health stressors. Elderly residents over 65 years old comprised nearly half of the deaths during and immediately after Hurricane Sandy. Financially insecure households often lack the resources necessary to prepare for, mitigate, or recover from the health impacts of flood events. How a giant air freshener could save our polluted cities. High in the skies over London, the UK’s first air pollution monitoring squad have been using the latest sensors to chart the levels of ozone and nitrogen dioxide in our atmosphere. 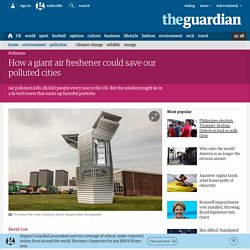 The team is highly trained, each equipped with a hi-tech backpack, and proficient in social media. Which all sounds relatively standard, apart from the fact that it is entirely made up of pigeons. Using one of the UK’s best-known feathered friends as a publicity stunt for air pollution awareness was the brainchild of Plume Labs, which has created an app for monitoring pollution on the go. It follows on the heels of similar apps released in the past two years, ranging from UCLA’s AirForU to BreezoMeter, the brainchild of Israeli engineer Ran Korber, who was looking to buy a house for his family far away from polluted environments. Air pollution is becoming big business – and not without cause.