Birmingham City University - Sign In. Pollution of air in the UK means 16,000 people die each year because of dirty air. More than 90 per cent of the UK’s population breathe highly polluted air on a daily basis, the World Health Organisation has revealed. 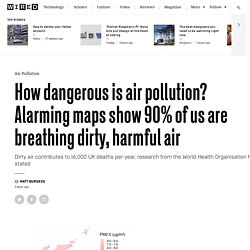 Using data from satellite measurements, air transport models and ground-level monitors, the organisation and the University of Bath developed a model that showed air pollution levels for more than 3,000 locations in 103 countries around the world. The results show that nine out of ten people (92 per cent) on Earth live in places where air pollution is higher than acceptable limits – even when they are outside. You can explore the interactive map here The health risks of breathing in polluted air include respiratory and cardiovascular disease, strokes, lung cancer and other astute breathing problems. Global warming making oceans 'sick', scientists warn. France bans the use of plastic crockery and cutlery to aid battle against climate change. Londoners in 2050 won't need cars. They'll be living in an app-powered eco-capital. England's plastic bag usage drops 85% since 5p charge introduced. Waste of resources is biggest threat to planet, warns Scottish environment agency.

Scotland’s environment agency has warned the country’s industries and farmers that their waste and inefficiency is now the biggest threat to the environment, overtaking pollution. 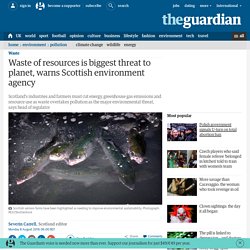 In a marked shift in strategy, the regulator’s chief executive, Terry A’Hearn, will urge businesses, farmers and manufacturers to adopt a “one planet prosperity” policy designed to cut their energy use, greenhouse gas emissions, waste and resource use. “The major threat to the environment now is that humanity is overusing the planet as a resource base,” he told the Guardian. A’Hearn argues that the Scottish Environment Protection Agency (Sepa) has largely won the battle against so-called gross pollution from onshore sources. Air, water and soil pollution is now far below the levels seen decades ago. A force of nature our influential Anthropocene period. We live in epoch-making times. 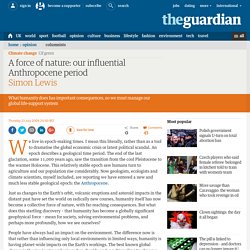 I mean this literally, rather than as a tool to dramatise the global economic crisis or latest political scandal. An epoch describes a geological time period. The end of the last glaciation, some 11,000 years ago, saw the transition from the cool Pleistocene to the warmer Holocene. This relatively stable epoch saw humans turn to agriculture and our population rise considerably. Now geologists, ecologists and climate scientists, myself included, are reporting we have entered a new and much less stable geological epoch: the Anthropocene.

Human impact has pushed Earth into the Anthropocene, scientists say. There is now compelling evidence to show that humanity’s impact on the Earth’s atmosphere, oceans and wildlife has pushed the world into a new geological epoch, according to a group of scientists. 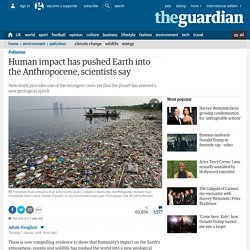 The question of whether humans’ combined environmental impact has tipped the planet into an “Anthropocene” – ending the current Holocene which began around 12,000 years ago – will be put to the geological body that formally approves such time divisions later this year. Plastic now pollutes every corner of Earth. Humans have made enough plastic since the second world war to coat the Earth entirely in clingfilm, an international study has revealed. 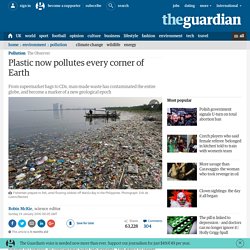 Shell #makethefuture. The Anthropocene epoch: scientists declare dawn of human-influenced age. Buying begets buying: how stuff has consumed the average American's life. The personal storage industry rakes in $22bn each year, and it’s only getting bigger. 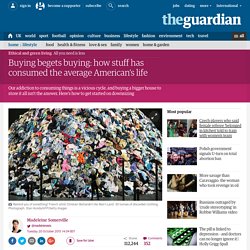 Why? I’ll give you a hint: it’s not because vast nations of hoarders have finally decided to get their acts together and clean out the hall closet. It’s not overpopulation that causes climate change, it’s overconsumption. Fears about overpopulation, once the apocalyptic vision du jour, have disappeared from the headlines in recent years. 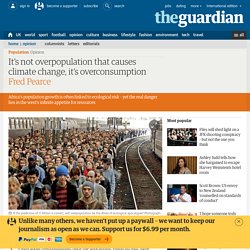 The consensus had been that we can look forward to peak population by late this century – maybe at 9 or 10 billion, compared to the current 7 billion. The only question seemed to be precisely when and at what level. But a new forecast this week in the journal Science suggests this is complacent. It states that population is unlikely to peak at any time soon, and that the century will close with a tally of 11 billion and rising. Is this right? The debate about peak population is focused specifically on what we think will happen in sub-Saharan Africa, where in some countries people still have five or more children. 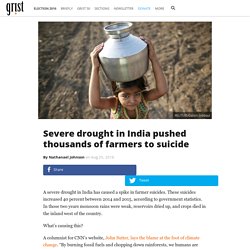 These suicides increased 40 percent between 2014 and 2015, according to government statistics. Burning trees for electricity is a bad idea. Climate change is such a vast and systemic problem that almost every large industry has tried to figure out how to make some money off it in the last couple of decades. 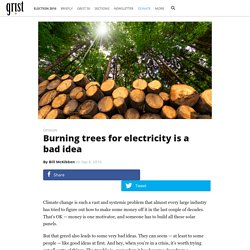 That’s OK — money is one motivator, and someone has to build all those solar panels. But that greed also leads to some very bad ideas. They can seem — at least to some people — like good ideas at first. And hey, when you’re in a crisis, it’s worth trying out all sorts of things. The trouble is, even when it has become clear from a scientific standpoint that these approaches aren’t working, companies and politicians keep doubling down, simply because there’s money to be made.

Turning corn into ethanol, for instance. Or substituting natural gas for coal — which seemed to make sense, because when you burn gas in a power plant, it gives off half as much carbon dioxide as coal. The latest of these sad sagas involves burning trees for electricity. The best way to fight climate change? Don’t call it climate change.

American cities from Boston to Baton Rouge are getting hammered by hurricanes, torrential downpours, and blizzards amped up by climate change. 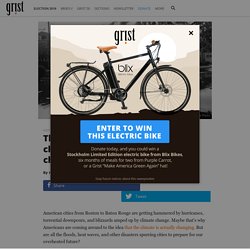 Maybe that’s why Americans are coming around to the idea that the climate is actually changing. But are all the floods, heat waves, and other disasters spurring cities to prepare for our overheated future? Sabrina McCormick, a sociologist at George Washington University who once investigated how cities cope with disasters for the United Nations’ Intergovernmental Panel on Climate Change, set out earlier this year to find out. Her study, recently published in the journal Climatic Change, breaks down 65 in-depth interviews with city officials and experts in six cities — Portland, Boston, Los Angeles, Raleigh, Tucson, and Tampa. Green Is In - The Cool Hunter. The Real Junk Food Project: revolutionising how we tackle food waste. Adam Smith is blunt and to the point when I call him to suggest an interview.