Why Congress just killed a rule restricting coal companies from dumping waste in streams. Most Americans favor stricter environmental laws and regulations. More Americans say environmental regulations are “worth the cost” than say such regulations come at too steep a price, according to a new Pew Research Center survey. 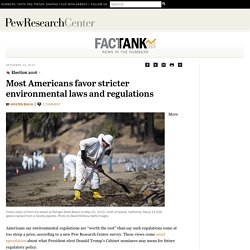 These views come amid speculation about what President-elect Donald Trump’s Cabinet nominees may mean for future regulatory policy. A majority of U.S. adults (59%) say stricter environmental laws and regulations are worth the cost, compared with roughly a third (34%) who say such regulations cost too many jobs and hurt the economy, according to the survey, conducted Nov. 30 to Dec. 5. Education level and age are both associated with perceptions of environmental regulations. 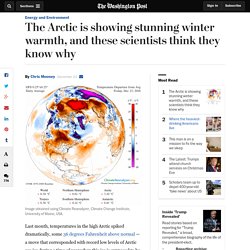 Last month, temperatures in the high Arctic spiked dramatically, some 36 degrees Fahrenheit above normal — a move that corresponded with record low levels of Arctic sea ice during a time of year when this ice is supposed to be expanding during the freezing polar night. And now this week, as you can see above, we’re seeing another huge burst of Arctic warmth. A buoy close to the North Pole just reported temperatures close to the freezing point of 32 degrees Fahrenheit (0 Celsius), which is 10s of degrees warmer than normal for this time of year. Although it isn’t clear yet, we could now be in for another period when sea ice either pauses its spread across the Arctic ocean, or reverses course entirely. 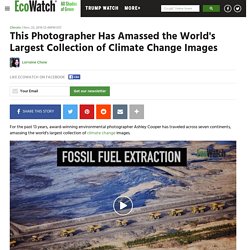 His work can be viewed on Global Warming Images as well as his new 416-page photo book, Images From a Warming Planet, featuring 500 of his best images. A selection of photos is also on display at the Archive Gallery at the Heaton Cooper Studio in the UK. The exhibition will run until the end of the year. "[Climate change is] quite simply, the greatest threat that humanity has ever faced," the UK-based artist told EcoWatch.

220 'Significant' Pipeline Spills Already This Year Exposes Troubling Safety Record. Three major U.S. pipeline spills within the last month are just a small part of the 220 significant incidents reported so far this year—and 3,032 since 2006—that provide a stark reminder of the environmental hazards of an aging pipeline infrastructure carrying fossil fuels. 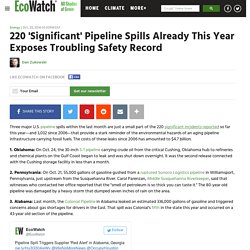 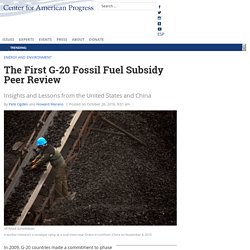 Doing so would constitute an important step forward in meeting the climate challenge and promoting sustainable economic growth at home and abroad. Fossil subsidies tilt the energy playing field away from renewable energy sources and encourage energy waste. Moreover, they are frequently regressive: In developing countries, the richest 20 percent of the population captures, on average, six times more of the value of fuel subsidies than the poorest 20 percent. History, Travel, Arts, Science, People, Places. The Eastern US could get a third of its power from renewables within 10 years. Theoretically.

Slideshow: Salton Sea preservation gets a hand from President Obama. California's largest lake, the Salton Sea, is in trouble. 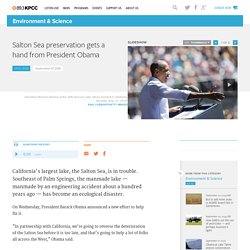 Southeast of Palm Springs, the manmade lake — manmade by an engineering accident about a hundred years ago — has become an ecological disaster. On Wednesday, President Barack Obama announced a new effort to help fix it. "In partnership with California, we're going to reverse the deterioration of the Salton Sea before it is too late, and that's going to help a lot of folks all across the West," Obama said. As part of Obama's visit to Lake Tahoe, the administration announced its plans to partner with the state of California to “support implementation of the state’s Salton Sea Task Force Agency Action plan, boost the region’s climate resilience through innovative conservation approaches, spur economic growth by developing new clean energy resources, improve public health, and provide a path forward for the [Salton] Sea.”

Under the plan, the federal government would: Serum Vaccine Antibody Concentrations in Adolescents Exposed to Perfluorinated Compounds. An Error Occurred Setting Your User Cookie. This site uses cookies to improve performance. If your browser does not accept cookies, you cannot view this site.

Setting Your Browser to Accept Cookies There are many reasons why a cookie could not be set correctly. Below are the most common reasons: You have cookies disabled in your browser. Why Does this Site Require Cookies? Global Sea Ice Diminishing, Despite Antarctic Gains. Native Plants. This Plastic-Eating Bacteria May Be The Answer to Our Waste Problem. Futurejournalismproject: Getting Up to Speed with...