Fracking shakes the American west: ‘a millennium’s worth of earthquakes’ Oklahomans don’t blink when they hear warnings about tornadoes, drought or ice-storms. 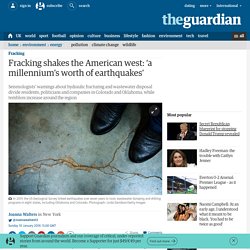 Earthquakes, however, catch their attention. Increasingly tied to tremors shaking the west, fracking for natural gas is creating alarm and division around western states that until recently enjoyed a boom in jobs and revenue. In Oklahoma, seismologists have warned that significant temblors last week could signal a larger, more dangerous earthquake to come in a state where drilling is destabilizing the bedrock.

Last Wednesday night two earthquakes, measuring 4.7 and 4.8 on the Richter scale, struck rural northern Oklahoma, beneath a major oil and gas producing area. The state historically experiences two shakes a year registering above level three. According to the National Earthquake Information Center (NEIC), which is based in Colorado, in 2014 Oklahoma experienced 585 such quakes. Choy added: “Even a magnitude four in the right place could cause great damage. It's Official: Oklahoma Experiences More Earthquakes Than Anywhere Else in the World.

It’s official: Oklahoma now has more earthquakes than anywhere else in the world, according to a spokesman from the Oklahoma Corporation Commission (OCC), which oversees the Sooner State’s oil and gas industry. 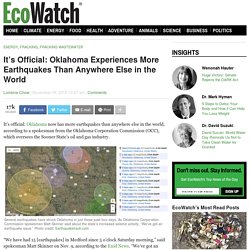 “We have had 15 [earthquakes] in Medford since 5 o’clock Saturday morning,” said spokesman Matt Skinner on Nov. 9, according to the Enid News. “We’ve got an earthquake issue.” “OCC has developed areas of interest, where earthquake clusters have occurred. A cluster is two earthquakes within a half mile of each other, with one measuring at least magnitude 3.2. Originally, they were three-mile circles, then six-mile circles. Scientists have linked this never-ending spate of tremors to the state’s drilling boom. As EcoWatch reported two months ago, Oklahoma went from two earthquakes a year before 2009 to two a day. The OCC is requiring well operators to show that water is not being injected below the state’s deepest rock formations, which is believed to contribute to the earthquakes. Safe Drinking Water Act. The Safe Drinking Water Act (SDWA) is the principal federal law in the United States intended to ensure safe drinking water for the public.[3] Pursuant to the act, the Environmental Protection Agency (EPA) is required to set standards for drinking water quality and oversee all states, localities, and water suppliers who implement these standards. 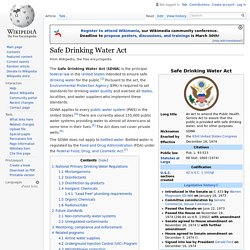 SDWA applies to every public water system (PWS) in the United States.[4] There are currently about 155,000 public water systems providing water to almost all Americans at some time in their lives.[5] The Act does not cover private wells.[6] The SDWA does not apply to bottled water. Bottled water is regulated by the Food and Drug Administration (FDA) under the Federal Food, Drug, and Cosmetic Act.[7] National Primary Drinking Water Regulations[edit] The SDWA requires EPA to establish National Primary Drinking Water Regulations (NPDWRs) for contaminants that may cause adverse public health effects.[8] Microorganisms[edit] Disinfectants[edit] We Are All Flint. Right now, we’re in this special moment where people are paying attention and raising their voices. 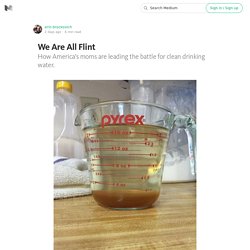 These chemicals, this problem, did not just arise yesterday. People have been drinking water that’s contaminated with PFOA or lead or TCE or other chemicals for too long. Towns in New Hampshire, Vermont, and New York are learning that their water is contaminated. Schools have turned off water fountains due to lead poisoning. Hannibal, Missouri and Tyler, Texas and Sebring, Ohio are all sounding the alarm. These issues don’t see any boundaries of rich or poor, black or white, Republican or Democrat. Eventually this moment will go away, when the attention wanes, and we will all forget that it ever happened — until the next crisis hits the news. 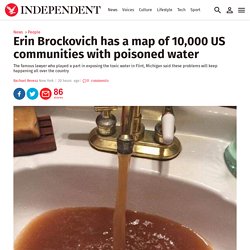 The real-life lawyer, who was played by actress Julia Roberts in a film about Ms Brockovich's fight for the residents of Hinkley, California to receive clean drinking water, has written a blog post for Medium which details how the disaster of polluted water is lying in wait to be exposed across the US. She said she has been able to write a list of affected towns and areas because she receives “hundreds of emails” from worried citizens every day. Her comments come the same week that Michigan Governor Rick Snyder testified in court about how much he knew and when he found out about the water crisis in Flint that affects 100,000 residents in his charge. “Susan Hedman from the EPA bears not one tenth of the responsibility of the state of Michigan and your administration and she resigned," he added.