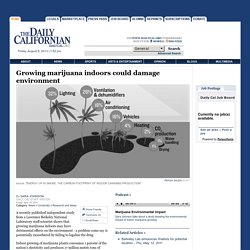 Indoor growing of marijuana plants consumes 1 percent of the nation's electricity and produces 17 million metric tons of carbon dioxide emissions each year, according to the study, published April 5 on the personal website of energy analyst and Berkeley lab staff scientist Evan Mills. "Large-scale industrialized and highly energy-intensive indoor cultivation of cannabis is a relatively new phenomenon, driven by criminalization, pursuit of security and the desire for greater process control and yields," Mills writes in the study.

The study based results on energy consumption data from a generic 4-by-4-by-8 feet production module, which holds about four plants. Tags: MARIJUANA, LAWRENCE BERKELEY NATIONAL LABORATORY. Cannabis carbon footprint. How Much Energy Does Indoor Pot Really Use? Last week, we posted “The Big Grow Debate: Which Is Better, Indoor or Outdoor Pot?” 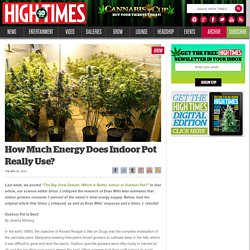 In that article, our science editor Sirius J critiqued the research of Evan Mills who estimates that indoor growers consume 1 percent of the nation’s total energy supply. Below, read the original article that Sirius J critiqued, as well as Evan Mills’ response and a Sirius J. rebuttal. Outdoor Pot Is Best! By Jeremy Moberg In the early 1980s, the objective of Ronald Reagan’s War on Drugs was the complete eradication of the cannabis plant. Unfortunately, indoor production consumes a tremendous amount of power. Today’s commercially produced indoor cannabis relies mostly on industrial fertilizers and pesticides to control the pests that rapidly flourish in enclosed monocultures. Indoor cultivation has also played a role in the evolution of the plant, since indoor growers tend to favor indica-dominant strains with shorter statures and flowering times.

How Much Electricity Do Indoor Plants Really Consume? How Much Energy Does Indoor Pot Really Use? Energy Consumption Balloons as Legal Marijuana Industry Blooms. As the legal marijuana market expands, so grows the energy consumption associated with an industry that depends on growing facilities with high-wattage lights and powerful cooling systems. 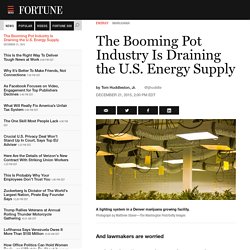 In 2012, a study from Evan Mills, Ph.D. —a scientist with the Lawrence Berkeley National Laboratory—found that legal indoor marijuana growing facilities accounted for 1% of national electricity use at a cost of roughly $6 billion per year, which compared to just $1 billion in energy costs for the pharmaceutical industry. Mills recently told Bloomberg that some of the bigger growing facilities operating today can use up to $1 million in power every month. In Colorado, where residents have voted to legalize both medical and recreational marijuana, Bloomberg adds that more than 1,200 licensed growing facilities eat up roughly half of the state’s new power demands and, last year, those facilities combined to use about the same amount of energy as 35,000 households.

Energy Consumption Balloons as Legal Marijuana Industry Blooms. This Is How Much Energy It Takes to Legalize Weed. A worker cleans the lights in the vegetative room at Medicine Man in Denver. 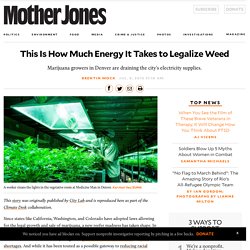 Kai-Huei Yau/ZUMA This story was originally published by City Lab and is reproduced here as part of the Climate Desk collaboration. Since states like California, Washington, and Colorado have adopted laws allowing for the legal growth and sale of marijuana, a new reefer madness has taken shape. In some areas, the bud industry has been credited for performing "economic miracles. " In others, it's to blame for everything from pollution and deforestation to water shortages. Charge another social problem to the weed game: It's getting too high on cities' energy supply. Colorado became the first state to legalize recreational weed use in 2012, and the commercial industry has grown exponentially ever since. That large jump still makes up less than 2 percent of the total electricity Denver consumes right now. 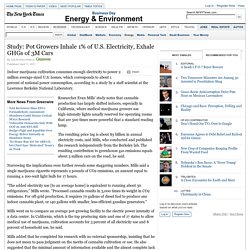 The resulting price tag is about $5 billion in annual electricity costs, said Mills, who conducted and published the research independently from the Berkeley lab. The resulting contribution to greenhouse gas emissions equals about 3 million cars on the road, he said. Narrowing the implications even further reveals some staggering numbers. Mills said a single marijuana cigarette represents 2 pounds of CO2 emissions, an amount equal to running a 100-watt light bulb for 17 hours. "The added electricity use [to an average home] is equivalent to running about 30 refrigerators," Mills wrote. Mills went on to compare an average pot-growing facility to the electric power intensity of a data center.

Mills, a member of the U.N.