Nature's hidden wealth is conservation's missed opportunity. Australia has one of the worst extinction records in the modern world. 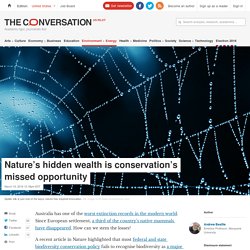 Since European settlement, a third of the country’s native mammals have disappeared. How can we stem the losses? A recent article in Nature highlighted that most federal and state biodiversity conservation policy fails to recognise biodiversity as a major source of industrial products. Much as explorers chart new territories, chemists, materials scientists, engineers and biologists are exploring biodiversity for medicine, agricultural and industrial products. This sits well with Australia’s current focus on innovation, driven by Prime Minister Malcolm Turnbull.

Tipping point: how we predict when Antarctica's melting ice sheets will flood the seas. Antarctica is already feeling the heat of climate change, with rapid melting and retreat of glaciers over recent decades. 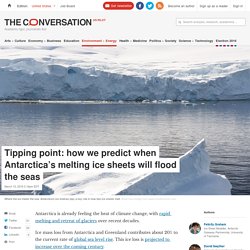 Ice mass loss from Antarctica and Greenland contributes about 20% to the current rate of global sea level rise. This ice loss is projected to increase over the coming century. ‘Never seen it so bad’: violence and impunity in Brazil’s Amazon. One of the perpetrators of arguably Brazil’s most internationally high-profile murders in recent years is currently walking around free. 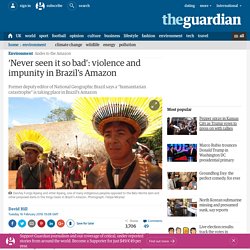 In 2013, amid much media coverage, Lindonjonson Silva Rocha was sentenced to 42 years prison for killing two nut collectors-turned-environmental activists in southern Pará, but then in November last year he escaped. Oil Spills Stain Peruvian Amazon. The executives at Petróleos del Perú (PETROPERÚ) have had better days. 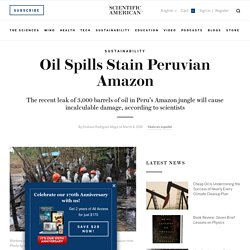 The Interethnic Association for the Development of the Peruvian Rainforest, representing the local indigenous peoples, has organized protests and set up a picket outside the Lima headquarters of the state enterprise they say is responsible for leaks that released 3,000 barrels of oil (about 477,000 liters) in several rivers in the Peruvian Amazon. Representatives of indigenous communities attributed the two accidents that occurred on January 25 and February 4 to a lack of maintenance of the company’s NorPeruano Pipeline. 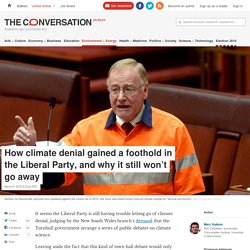 Leaving aside the fact that this kind of town hall debate would only entrench opposing viewpoints rather than making scientific headway (a task best left to peer-reviewed journals), it is not the only recent example of Liberal Party members seeking to stoke doubts over the reality of climate change. Global food production threatens to overwhelm efforts to combat climate change. Each year our terrestrial biosphere absorbs about a quarter of all the carbon dioxide emissions that humans produce. 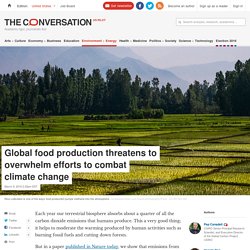 This a very good thing; it helps to moderate the warming produced by human activities such as burning fossil fuels and cutting down forests. But in a paper published in Nature today, we show that emissions from other human activities, particularly food production, are overwhelming this cooling effect. This is a worrying trend, at a time when CO₂ emissions from fossil fuels are slowing down, and is clearly not consistent with efforts to stabilise global warming well below 2℃ as agreed at the Paris climate conference.

To explain why, we need to look at two other greenhouse gases: methane and nitrous oxide. The other greenhouse gases Each year, people produce about 40 billion tones of CO₂ emissions, largely from burning fossil fuels and deforestation. The human emissions of these gases are largely associated with food production. Fed Up with Inaction, Peruvian Tribe Takes Hostages Following Amazon Oil Spills. Australia's coal mines are pouring methane gas into the atmosphere. Methane emissions are one of the major concerns surrounding coal seam gas. 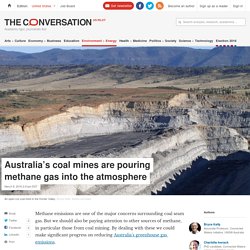 But we should also be paying attention to other sources of methane, in particular those from coal mining. By dealing with these we could make significant progress on reducing Australia’s greenhouse gas emissions. Some coal mines have operational power plants and pilot studies to use the vented methane and reduce emissions. But recent mapping of the concentration of methane in the atmosphere at ground level by UNSW Australia in association with Royal Holloway University of London Greenhouse Gas Laboratory shows that we need to do much better. Methane is a colourless and odourless gas, but, like carbon dioxide, it contributes to global warming. An environmentally just city works best for all in the end. Melbourne’s population is expected to almost double by mid-century, overtaking Sydney as Australia’s biggest city. 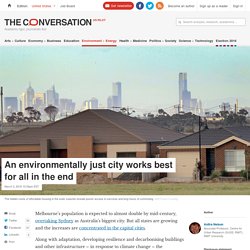 But all states are growing and the increases are concentrated in the capital cities. Along with adaptation, developing resilience and decarbonising buildings and other infrastructure – in response to climate change – the expansion and densification of the city present massive challenges for state and local council planners. Skyscraper residential blocks and ultra-tiny apartments have already created controversy. Will Melbourne end up with a skyline like a pincushion, or Chicago without its grand style? Are vertical communities feasible? With a two-tier, global-local real estate market and growing numbers of international students, will inner Melbourne become host – or hostage – to a clutter of boarding-house-like apartments?

We traced the human fingerprint on record-breaking temperatures back to the 1930s. In recent years climate scientists have looked at the role climate change played in unusual extreme weather events such as Australia’s hottest summer in 2012-13 and recent heatwaves. 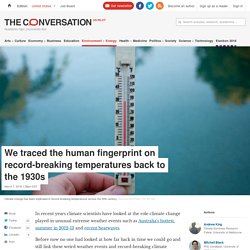 Climate change is a potent element in the deadly brew of disaster risk. The Hyogo framework for action (HFA), adopted in January 2005 by UN member states, was an unprecedented move to promote saving lives and livelihoods from disasters over a decade. 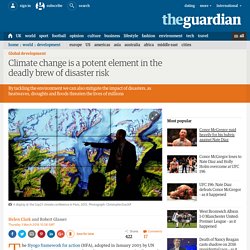 Has there been progress? The Centre for Research on the Epidemiology of Disasters and major insurance companies agree that, in 2015, figures for deaths, numbers of people affected and economic losses from disasters were below the 10-year average. But are we getting better at managing disasters, or are we actually reducing disaster risk? There is a significant difference between the two, and addressing that difference should have a profound impact on development. Agriculture: Disaster & climate change resilience. (This is the condensed version of the speech I presented at the Arangkada Philippines Forum on March 1.) The Philippines is the 13th most climate –vulnerable out of 186 countries, according to the 2016 Climate Change Vulnerability Index.

At least 85 provinces are now experiencing severe drought as we are in the middle of the worst El Niño event to hit the country in the last 20 years. Mindanao will be the hardest hit by changes in climate averages and extremes. By 2030, 1.4 million Filipinos will be at higher risk of hunger due to lower agricultural production caused by climate change. One should note farmers are the lowest paid sector in the country. Human-Induced Climate Change Triggered The Middle East’s Worst Drought In 900 Years, NASA Says.

Over the past four years, as a relentless and bloody civil war rages on in Syria, more than 4 million Syrians have fled the country, while over 7 million have been internally displaced. Oil Spills Stain Peruvian Amazon. Brilliant Photos Capture the Impact of Overpopulation and Overconsumption. There are currently seven billion people on Earth and that number is set to spike to nine billion by 2050. Yes, that’s a whole lot of people, but you can’t really grasp just how many until you consider the sheer volume of resources needed to sustain all of us. Humankind currently use around one and a half Earth’s worth of land, water and energy resources, so figuring out how we are going to accommodate an additional two billion people has become one of our generation’s greatest challenges.

As with most modern dilemmas, the best way to find a solution starts with raising awareness. The environment under President Trump. Let’s play a game. It’s April 30, 2017: Day 100 of President Donald Trump’s first hundred days. The champagne floweth, the Wall is under construction, and now we’re more or less federally mandated to refer to 1600 Pennsylvania as the Gold House. The president’s bombastic governance is buoyed by a comfortable Republican congressional majority. After the Senate blockaded Barack Obama’s Supreme Court nominee in 2016, it confirmed a jubilant Ted Cruz, who has only cemented far-right ideology in the justice system. The GOP has had a busy hundred days.

Seattle’s Young Salmon Are Laced With Our Antidepressants. It takes a lot of water to feed us, but recycled water could help. This is What We’ve Done to the Orangutan Capital of the World… Orangutans are incredible animals. Revealed: Big Oil's Backroom Lobby Blitz to Drill in Arctic...Again.