How do you make a building earthquake-resistant? VIDEO. Explore what the world’s new coastlines would look like if all the ice melted. Logged off: can deforestation be controlled? #GeographyTeacher. Chemical pollution in China: which metal poses the greatest risk to the Bohai region’s freshwater ecosystem? Professor Andrew Johnson and Dr Monika Jürgens, Environmental Scientists at the Centre for Ecology & Hydrology, contributed to a recent study looking at which metal presents the greatest risk to the freshwater ecosystem in the Bohai region of China. 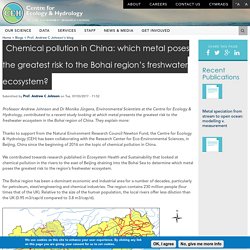 They explain more: Thanks to support from the Natural Environment Research Council Newton Fund, the Centre for Ecology & Hydrology (CEH) has been collaborating with the Research Center for Eco-Environmental Sciences, in Beijing, China since the beginning of 2016 on the topic of chemical pollution in China. We contributed towards research published in Ecosystem Health and Sustainability that looked at chemical pollution in the rivers to the east of Beijing draining into the Bohai Sea to determine which metal poses the greatest risk to the region’s freshwater ecosystem.

The Bohai region has been a dominant economic and industrial area for a number of decades, particularly for petroleum, steel/engineering and chemical industries. Soils. What is soil? Soil is the layer of loose material on the earth’s surface. Without soil, we would not be able to grow crops and plants. Therefore, - ppt download. 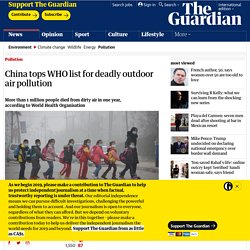 The UN agency has previously warned that tiny particulates from cars, power plants and other sources are killing 3 million people worldwide each year. For the first time the WHO has broken down that figure to a country-by-country level. It reveals that of the worst three nations, more than 1 million people died from dirty air in China in 2012, at least 600,000 in India and more than 140,000 in Russia. At 25th out of 184 countries with data, the UK ranks worse than France, with 16,355 deaths in 2012 versus 10,954, but not as poorly as Germany at 26,160, which has more industry and 16 million more people.

Australia had 94 deaths and 38,043 died in the US that year from particulate pollution. 100 countries push to phase out potentially disastrous greenhouse gas. A loose coalition of more than 100 countries, including the US and European nations, is pushing for an early phase-out of hydrofluorocarbons (HFCs), a powerful greenhouse gas that if left unchecked is set to add a potentially disastrous 0.5C to global temperatures by the end of the century. 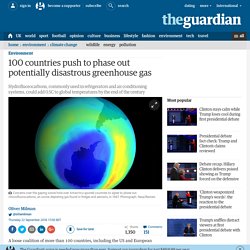 At a meeting in New York on Thursday, world leaders called for an “ambitious phase-down schedule” for HFCs, which are commonly used in refrigerators and air conditioning systems, and pledged adaptation money for developing nations where HFC use is rapidly increasing. “The growth in some HFCs is extraordinarily fast right now so it’s critical that we have an ambitious agreement,” a White House official told the Guardian. “This is an extraordinarily important opportunity.” Concerns over the gaping ozone hole over Antarctica spurred countries to agree to phase out chlorofluorocarbons (CFCs), an ozone-depleting gas found in fridges and aerosols, in the 1987 Montreal Protocol. 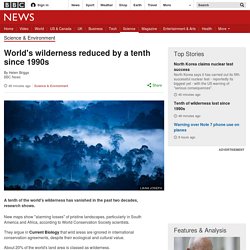 New maps show "alarming losses" of pristine landscapes, particularly in South America and Africa, according to World Conservation Society scientists. About 20% of the world's land area is classed as wilderness. By this, scientists mean landscapes free of large-scale human disturbances such as housing, development and industry. The majority of these untouched spaces are found in North America, north Asia, north Africa and Australia. They are often home to indigenous peoples as well as endangered plants and animals. 'Invest more' in protected areas 'Rewilding' Australia's landscape James Watson of the University of Queensland, Australia, and the US Wildlife Conservation Society in New York said wilderness areas "are completely ignored in environmental policy".

"We probably have one to two decades to turn this around. " Image copyright WCS. Red river near Arctic nickel plant examined by inspectors.