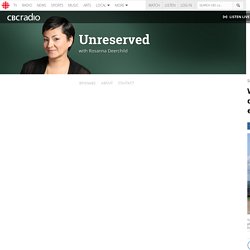 She and other indigenous women carry an open vessel of water great distances, relay-style as a way to bring awareness to endangered bodies of water. Beeds says it is based in the traditional belief that women are responsible for caring for the water. "It's very much a prayer," she explained. "It's like a walking prayer if you will. 'It's very much a prayer. The Cree and Métis Ph.D student in Indigenous Studies at Trent University says it's more difficult then it seems.

"You cannot go backwards with it and you cannot come to a stop," Beeds said. Over the last few years, Beeds has joined in several water walks and has logged more than 850 kilometres in her moccasins. Life-shifting experience Beeds says even though the history of water walks is contemporary, the act of walking is something Indigenous Peoples have done for thousands of years. "For instance, on the sacred water walk at times there was no Tim Hortons," she said. Trudeau government to consult directly with First Nations on Trans Mountain, Energy East pipelines. APTN National News OTTAWA—The Trudeau Liberal government says it will directly consult with First Nation communities impacted by the proposed Trans Mountain and Energy East pipeline projects in addition to the existing regulatory processes handled by arms-length federal agencies. 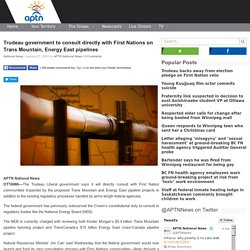 The federal government has previously outsourced the Crown’s constitutional duty to consult to regulatory bodies like the National Energy Board (NEB). The NEB is currently charged with reviewing both Kinder Morgan’s $5.4 billion Trans Mountain pipeline twinning project and TransCanada’s $15 billion Energy East cross-Canada pipeline project. Natural Resources Minister Jim Carr said Wednesday that the federal government would now launch and fund its own consultation process with First Nations communities—likely through a ministerial representative—at the conclusion of the NEB’s review of both pipeline projects.

This would push a final decision on Energy East to the middle of 2018. news@aptn.ca. Wetlands Matter. David Suzuki's world view profoundly influenced by Haida ties. Sunday February 07, 2016 David Suzuki will never forget the day, 30 years ago, when he interviewed Haida activist and artist Guujaaw about his fight against logging operations on Haida Gwaii, known at the time as the Queen Charlotte Islands. 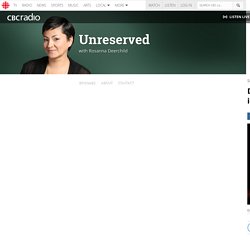 "I said to him, 'You know, Guujaaw, your people are desperate for jobs … why are you fighting against logging? ' And he said, 'because when the trees are gone, we'll just be like everybody else.'" For Suzuki, this was a radically different way of looking at the world. Guujaaw tells Suzuki why the Haida are opposed to logging.1:13 "What that simple statement was saying is that to be Haida means to be connected to the land in a profound way," said Suzuki.

"We don't end at our skin or finger tips, it's the trees, and the fish, and the air, and the birds all of that is what makes the Haida who they are. " Guujaaw's world view resonated with Suzuki — it put words to his own deep connection to nature he developed as a child living in Slocan, B.C. The Environment Edition Theme and Resources Brainstorm. Circle of life. 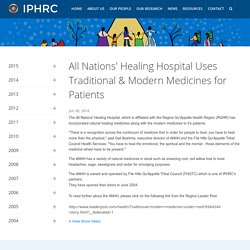 "There is a recognition across the continuum of medicine that in order for people to heal, you have to heal more than the physical," said Gail Boehme, executive director of ANHH and the File Hills Qu'Appelle Tribal Council Health Services. "You have to heal the emotional, the spiritual and the mental - those elements of the medicine wheel have to be present. " The ANHH has a variety of natural medicines in stock such as sneezing root, red willow tree to treat headaches, sage, sweetgrass and cedar for smudging purposes. The ANHH is owned and operated by File Hills Qu'Appelle Tribal Council (FHQTC) which is one of IPHRC's partners. They have opened their doors in June 2004. Learningindigenousscience. Cultural Perspectives on Sustainability Sci 10. 4 Seasons 4 Languages Elder A Poitras handout. Feast Protocol (Okanese) Our Young People EnviroEd ELA supports.