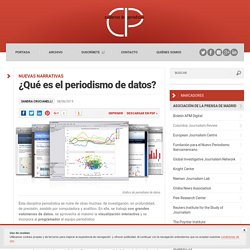 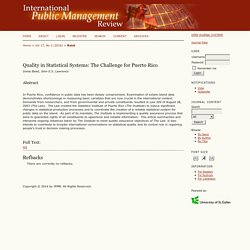 Lawrence Abstract In Puerto Rico, confidence in public data has been deeply compromised. Examination of extant island data demonstrates shortcomings in measuring basic variables that are now crucial in the international context. Refbacks. ProPublica Summer Data Institute. Our Materials Here are all of the materials we used to teach the 2016 ProPublica Data Institute: slides, exercises, links, and homework. 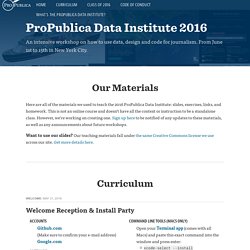 This is not an online course and doesn’t have all the context or instruction to be a standalone class. However, we’re working on creating one. Sign up here to be notified of any updates to these materials, as well as any announcements about future workshops. Want to use our slides? Code of Conduct 1. ProPublica believes the Summer Data Institute should be truly open for everyone. This code of conduct outlines our expectations for participant behavior as well as the consequences for unacceptable behavior. We expect all of our instructors and students to help us create a safe and positive workshop for everyone. 2.

Interactive: Ten years of war. The war in Afghanistan - the longest in American history - has changed markedly since US president Barack Obama took office in January 2009. 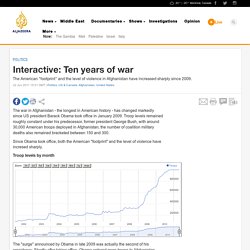 Troop levels remained roughly constant under his predecessor, former president George Bush, with around 30,000 American troops deployed in Afghanistan; the number of coalition military deaths also remained bracketed between 150 and 300. Since Obama took office, both the American "footprint" and the level of violence have incresed sharply. Troop levels by month The "surge" announced by Obama in late 2009 was actually the second of his presidency. Shortly after taking office, Obama ordered more troops to Afghanistan, bringing US troop levels from roughly 33,000 in January 2009 to more than 67,000 by year's end. US military deaths by year 2010 was by far the deadliest year for coalition troops in Afghanistan, with 711 total fatalities, a 36 per cent increase from the previous year. 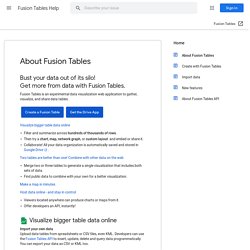 Get more from data with Fusion Tables. Fusion Tables is an experimental data visualization web application to gather, visualize, and share data tables. Visualize bigger table data online Filter and summarize across hundreds of thousands of rows. Then try a chart, map, network graph, or custom layout and embed or share it.

Two tables are better than one! Merge two or three tables to generate a single visualization that includes both sets of data. Make a map in minutes Host data online - and stay in control Viewers located anywhere can produce charts or maps from it. Visualize bigger table data online. Topics with Label: Data Journalism - Microsoft Power BI Community. Microsoft Stories. Cairo became El Mundo’s director of online with five people on his team. 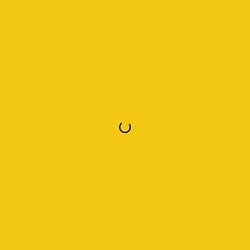 At the time, there were only a handful of other global publications that were doing graphical work on a similar level. The shortlist included The Washington Post, The New York Times, The Chicago Tribune and South Florida’s The Sun Sentinel. “He always understood that the limits of the discipline were in our capacity to imagine new story forms that combined words, audio, data, diagrams and interaction. It's a lesson I've never let go of,” said Xaquín González Veira, who worked with Cairo at El Mundo and is now the Editor of Guardian Visuals at The Guardian. This approach proved its value in explaining such complex, multilayered stories as the 2001 terrorist attacks in New York City and later the 2004 bombings in Madrid. As news graphics started winning design prizes like the Malofiej, many skeptics were silenced. “The work was talking for itself,” Cairo said. Power BI. Launched this week in beta mode, Microsoft's Power BI allows you to export live-updating visualizations to the web. 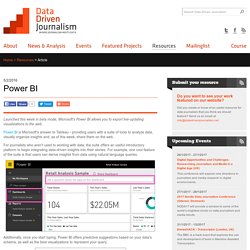 Power BI is Microsoft's answer to Tableau - providing users with a suite of tools to analyze data, visually organize insights and, as of this week, share them on the web. For journalists who aren't used to working with data, the suite offers an useful introductory platform to begin integrating data-driven insights into their stories. For example, one cool feature of the suite is that users can derive insights from data using natural language queries. Additionally, once you start typing, Power BI offers predictive suggestions based on your data's schema, as well as the best visualizations to represent your query. As well as a standard set of visualizations, develops can create .pbviz files to customize these, and Microsoft offers a free gallery of tested user generated visualizations for less advanced users.