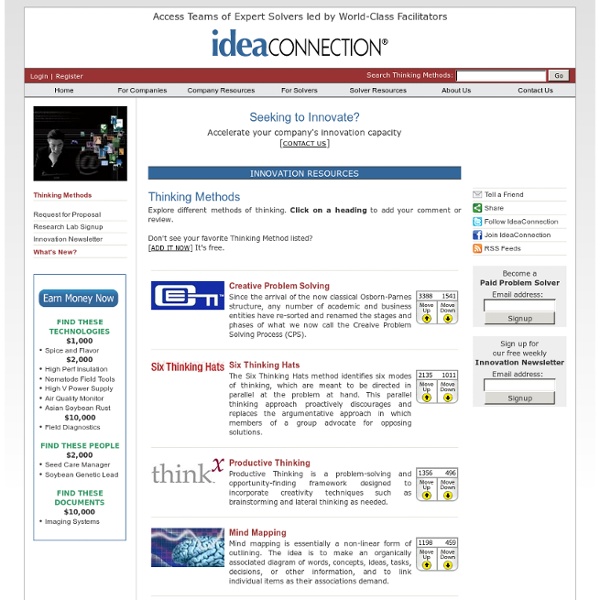 Thinking Methods: Creative Problem Solving They further divided the six stages into three phases, as follows: 1. Exploring the Challenge (Objective Finding, Fact Finding, and Problem Finding), Generating Ideas (Idea Finding), and Preparing for Action (Solution Finding and Acceptance Finding). Description: Since the arrival of the now classical Osborn-Parnes structure, any number of academic and business entities have re-sorted and renamed the stages and phases of what we now call the Creative Problem Solving Process (CPS). How does consciousness work A couple of days ago I was reminded that there was another big question to be answered. The first big question is scattered throughout this blog. It boils down to a theory of everything. I am leaning towards M-Theory. This of course is not based on any scientific or mathematic knowledge of mine.

The Sixteen Personality Types - High-Level ISTJ - The Duty Fulfiller Serious and quiet, interested in security and peaceful living. Extremely thorough, responsible, and dependable. Well-developed powers of concentration. Usually interested in supporting and promoting traditions and establishments. Learn How to Think Different(ly) - Jeff Dyer and Hal Gregersen by Jeff Dyer and Hal Gregersen | 10:24 AM September 27, 2011 In the Economist review of our book, The Innovator’s DNA, the reviewer wondered whether genius-level innovators such as Marc Benioff, Jeff Bezos, and Steve Jobs challenge the idea that working adults can really learn how to think differently and become innovators. We don’t think so. Remember, it was Steve Jobs who jump-started the now-famous “Think Different” advertising campaign as a way to inspire consumers and recharge Apple’s innovation efforts. It worked. Reflecting back on the campaign, Jobs said “The whole purpose of the ‘Think Different’ campaign was that people had forgotten what Apple stood for, including the employees.”

A voyage through the multiverse and higher dimensional hyperspac "Remarkable claims require remarkable proof." -- Carl Sagan The "multiverse" idea—once thought to be so crazy it only belonged on late night television—has now become the dominant theory in all of cosmology. The idea now dominates conversations in science circles and it seems you cannot avoid the theory of the multiverse. Einstein first gave us the idea that the universe is a soap bubble of some sort and we reside on the skin of this expanding bubble. This observation of an expanding bubble is now one of the greatest experimental achievements of the last century.

Crafter (role variant) Crafters are tactical operators, concrete in speech and utilitarian in action. In social situations, they are directive and reserved.[2] Crafters are masters at using tools of every type—artistic, technological, martial. Although they are introverts, they are authoritarian in their interactions with others and can be forceful at influencing people. They focus on accomplishing tasks efficiently and skillfully. To master the tool of their interest, Crafters require a certain degree of seclusion in which to practice. The result is often a virtuosity that other types find difficult to match.[1]

Realistic Lateral Thinking Puzzles Lateral Thinking Puzzles, unlike most puzzles, are inexact. In a sense, they are a hybrid between puzzles and storytelling. In each puzzle, some clues to a scenario are given, but the clues don't tell the full story. Your job is to fill in the details and complete the story. Positive and Negative Thoughts ~ How the Subconscious Mind Works « Mediums World Higher Selves Quote: The Thought Form Body is an invisible body that contains realities that have been created through every thought generated by any individual at any point in time. Within this envelope [energy field] dwells many different ‘yous.’ There is the ‘you,’ for example, who lives in this altered reality as an actual energy identity who is poor, who has no money. This altered reality has been created by you based on every thought you’ve projected dealing with a state of financial lack. This altered reality that is the ‘you’ in a state of financial lack actually seeks to reinforce and empower itself, the altered reality that it has become.

Protector (role variant) The Protector Guardian is one of the 16 role variants of the Keirsey Temperament Sorter,[1] a self-assessed personality questionnaire designed to help people better understand themselves. David Keirsey originally described the Protector role variant; however, a brief summary of the personality types described by Isabel Myers contributed to its development. Protectors correlate with the ISFJ Myers-Briggs type.[2] Protectors are observant, cooperative, informative, and attentive. They are greatly concerned with the security of others and they often find assisting the downtrodden or people with disabilities to be satisfying.