Anything and everything to make writing easier and better :)

I'm going to go through every month and sort the links into folders, so if you want to see the new links, they are here in this folder, but anything older than 1 month is sorted into the folders.

I hope you find these links as useful as I have! Happy writing bitches :) Creative Writing Solutions Site Map. Zim - a desktop wiki. Fifty Plot Twist Ideas for Your Work-In-Progress! — Lucy Flint. Hey there, lionhearts! 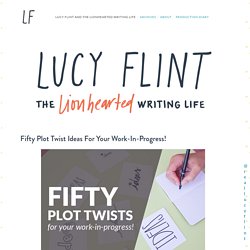 I hope you find the following fifty plot twists fun and exciting and helpful. And if you want more where they came from... check out the new idea series I've just posted! It's a nine-part series (I know, I know, I get carried away!) On EVERYTHING I know about generating tons of awesome ideas... including the principles I used to create these fifty plot twists—which is far and away the most popular post on this site!

If you never want to run out of ideas,you gotta check it out: Here's the roundup of links: Part 1, 2, 3, 4, 5, 6, 7, 8, 9. Focus On This When Your Writing Life Feels Cramped, Musty, and Stale — Lucy Flint. Like I said in the introduction to this series, I nearly named this blog "Pursuing the Merry & Wild Writing Life. 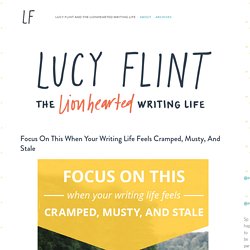 " Merriment and wildness: Two things that I want TONS of in my writing life. For sure. Last Thursday we talked about loving all of the writing process—especially the difficult, the challenging, the dreaded, and the ugly. That's gonna up the merriment factor for all of us! So today, let's talk about the wildness. One of my grandmothers had a much older half-sister, who was (apparently) very dramatic and theatrical. Later in life, she also wrote a novel. According to one of her letters, she claimed that she researched it by going into the past and talking with people from that time period. Novel writing software - bibisco. Horror Story Ideas - Story Writing For Scaring People.

My Very Own Scary Story Ideas for Writers to Develop I'm allowing people to see some of my horror story ideas in the hopes of motivating myself into developing some of my own story writing. 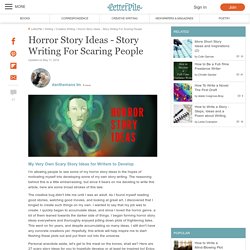 The reasoning behind this is a little embarrassing, but since it bears on me deciding to write this article, here are some broad strokes of this tale: The creative bug didn't bite me until I was an adult. 10 Horrifying Horror Story Prompts. Every Bike Ride by Duncan Long Here are 10 horror story prompts that should give you the chills, and get you writing something scary. 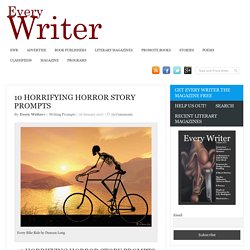 Warning if these don’t scare you, you are most-likely a zombie, vampire, werewolf or ghost. If you are unaware of being one of the undead, seek medical attention immediately. 10 Horrifying Horror Story Prompts. Go Teen Writers: Storyworld Building: Types of Magic. No, I'm not referring to stage magic here, where the magician pulls a rabbit out of a hat or makes his lovely assistant disappear. 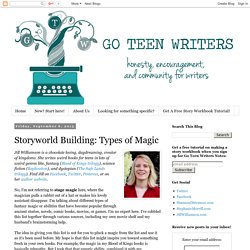 I'm talking about different types of fantasy magic or abilities that have become popular through ancient stories, novels, comic books, movies, or games. Writing Fantasy: The Creation of Magic. Magic, the mystical element of fantasy writing, can add incredible beauty and power to a story and take it from the mundane to the divine. 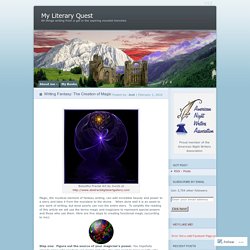 When done well it is an asset to any work of writing, but done poorly can ruin the entire story. To simplify the reading of this article we will use the terms magic and magicians to represent special powers and those who use them. Here are five steps to creating functional magic (according to me): Step one: Figure out the source of your magician’s power. You hopefully already know who needs to use magic and why. Genetic: In Harry Potter magic ran in families. Step Two: Pick a power source. How to Write a Query Letter: Literary Agents Share Advice. [If you are wondering how to write a query letter, this post will help you quite a bit - as you approach literary agents. 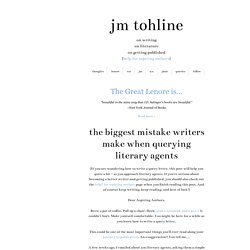 If you're serious about becoming a better writer and getting published, you should also check out the help! For aspiring authors page when you finish reading this post. And of course: keep writing, keep reading, and best of luck!] Dear Aspiring Authors, Download – Manuskript. Warning: Though many features are already working as expected, Manuskript is still in heavy development. 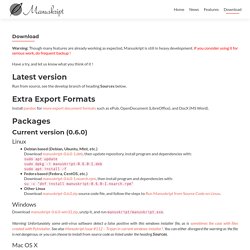 If you consider using it for serious work, do frequent backup ! Have a try, and let me know what you think of it ! Run from source, the develop branch. See below. From Pantser to Planner: How I Changed My Writing Style « Victoria Strauss, Author of Fiction for Adults and Young Adults. I’m the original pantser. 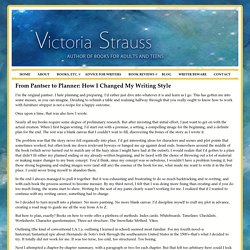 I hate planning and preparing. I’d rather just dive into whatever it is and learn as I go. Fantasy Race Generator. Races The race of elves. 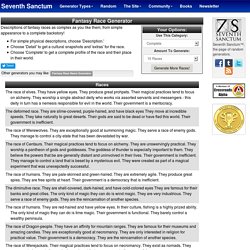 They have yellow eyes. They produce great prohpets. Their magical practices tend to focus on alchemy. They worship a single abstract deity who works via assorted servants and messengers - this deity in turn has a nemesis responsible for evil in the world. The deformed race. Fantasy tropes - Wikipedia. Many works of fantasy operate using these tropes, while others use them in a revisionist manner, making the tropes over for various reasons such as for comic effect, and to create something fresh (a method that often generates new clichés). Good vs. evil[edit] The conflict of good against evil is a theme in the many popular forms of fantasy; normally, evil characters erupt from their lands to invade and disrupt the good characters' lands.[2] J.

R. R. Tolkien delved into the nature of good and evil in The Lord of the Rings, but many of those who followed him use the conflict as a plot device, and often do not distinguish the sides by their behavior. Hero[edit] Browsing Profiles on DeviantArt. Creature-Race creation sheet by Sethian-Motzart on DeviantArt. A Writer’s List of Mythical Creatures and Beings! – Bryn Donovan. Whether you’re looking for magical beings or mythological beasts, this list is a good place to start.

I started making it for my book Master Lists for Writers. I didn’t finish it for inclusion there because it seemed like I could keep adding creatures forever, there are many variations of some myths, and my explanations were getting too long. Here I’ve kept most of the descriptions short and I’ve linked to more information. (For most of these, click on the name of the creature and it’ll take you to a useful link!) For each creature, I’ve made sure I could find at least two sources saying the same thing, but in some cases I may not have landed on the most popular or the most accurate version.

With a few exceptions, I haven’t included the names of individual demons and creatures and such, but only general categories or species. A Writer’s List of Mythical Creatures and Beings! – Bryn Donovan. For Fantasy Writers : The Writing Nut. Choosing Names for your Characters Baby Names Country Baby Name Box: Fantasy, Folklore & Fairy Names Baby Names & Meanings. The Perfect Fantasy > Ancient Prophecies. A Lesson by Dusty Prophecies are a dime a dozen in fantasy novels.

Learn how to make yours stand out.... To write a fantasy, it is usually best to avoid prophecies and ancient lore or predictions, because while it may add to the story, it also has the potential to destroy it. (Find Yourself) From Amateur Author to B.. Dictionary definitions you can understand - YourDictionary. How to Find Your Character's Voice. By Janice Hardy, @Janice_Hardy Part of the Your Writing Questions Answered Series Q: I struggle with internalization in first person POV.

I've read your internalization 101 post. Maybe it's that I don't know my character well enough to get a feel for how she would describe what she sees, feels, hears etc. Berley’s Top 10 World Building Tips for Sci Fi or Fantasy. How to Make Your Imaginary World Real. There isn’t a certified qualification or course on world-building (well, not in my neighborhood), but every story requires it. Whether your tale is set in a real place or an imagined one, you need to establish your characters’ world so that the reader can suspend disbelief and fully engage with their story. Of course, the more differences to our own world you introduce, the more you need to focus on getting those details absolutely right – but you need to do it in such a way that they almost fade into the background so the reader is instead focusing on the characters and the story.

7 Deadly Sins of Worldbuilding. How to Make Your Imaginary World Real. How To Write A Novel Using The Snowflake Method. Writing a novel is easy. Writing a good novel is hard. The Character Name Generator: Generate a Character Name and Personality. Resources for Authors and Writers. How To Work On More Than One Book At A Time. Writing Multiple Novels Simultaneously - Writers Stack Exchange. Basic Tips To Create Better Characters With Tragic & Traumatic Backstories.

First, ask yourself why you're giving your character a tragic or traumatic backstory. Are you giving your character this backstory to build up/explain what kind of person your character is now? Basic Tips To Write Better Abuse Victims & Abuse Situations. Abuse is a horrible fact of life, and it takes many forms. Unfortunately, it's often misunderstood and handled badly in fiction. This page contains potentially-triggering material, so be warned. Abuse often starts out small and gradually gets bigger. If abusers started off new relationships at their prime levels of nastiness, they'd drive away just about everyone at first go. Tools for Writing.