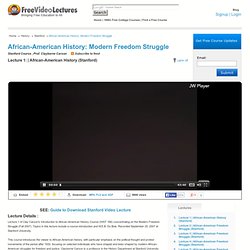 Topics in this lecture include a course introduction and W.E.B. Du Bois. Recorded September 25, 2007 at Stanford University. This course introduces the viewer to African-American history, with particular emphasis on the political thought and protest movements of the period after 1930, focusing on selected individuals who have shaped and been shaped by modern African-American struggles for freedom and justice. Complete playlist for the course: Course syllabus: More on Clayborne Carson: Stanford University channel on YouTube: Course Description : Other Resources : Syllabus | Other History Courses » check out the complete list of History lectures. 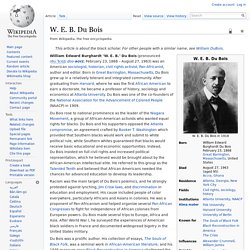 The Souls of Black Folks 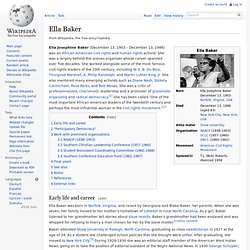 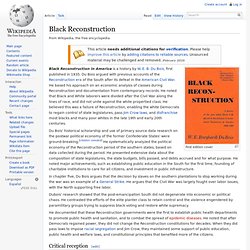 E. B. 33 minutes in. 34 minutes in. Clarence Benjamin Jones. Vincent Harding. Vincent Gordon Harding (July 25, 1931 – May 19, 2014) was an African-American historian and a scholar of various topics with a focus on American religion and society. 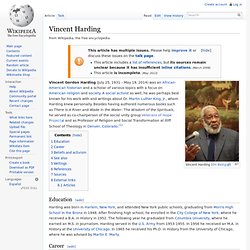 A social activist as well, he was perhaps best known for his work with and writings about Dr. Martin Luther King, Jr., whom Harding knew personally. Robert Parris Moses. Since 1982 Moses has developed the nationwide Algebra Project in the United States. 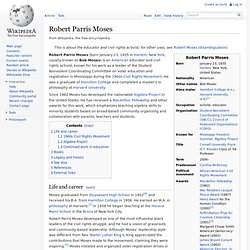 He has received a MacArthur Fellowship and other awards for this work, which emphasizes teaching algebra skills to minority students based on broad-based community organizing and collaboration with parents, teachers and students. Life and career[edit] Robert Parris Moses developed as one of the most influential black leaders of the civil rights struggle, and he had a vision of grassroots and community-based leadership. Although Moses’ leadership style was different from Rev. 34:30 minutes in. Black Panther Party. The Black Panther Party or BPP (originally the Black Panther Party for Self-Defense) was a black revolutionary socialist organization active in the United States from 1966 until 1982. 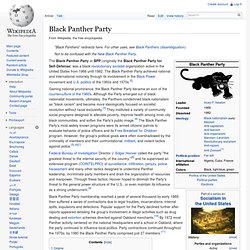 The Black Panther Party achieved national and international notoriety through its involvement in the Black Power movement and U.S. politics of the 1960s and 1970s.[2] Federal Bureau of Investigation Director J. Edgar Hoover called the party "the greatest threat to the internal security of the country,"[8] and he supervised an extensive program (COINTELPRO) of surveillance, infiltration, perjury, police harassment and many other tactics designed to undermine Panther leadership, incriminate party members and drain the organization of resources and manpower.

Through these tactics, Hoover hoped to diminish the Party's threat to the general power structure of the U.S., or even maintain its influence as a strong undercurrent.[9] Oakland Community School - Oakland Wiki. Angela Davis. Angela Yvonne Davis (born January 26, 1944) is an American political activist, scholar, and author. 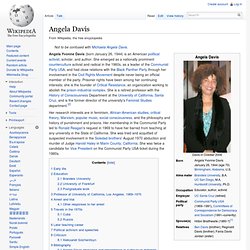 She emerged as a nationally prominent counterculture activist and radical in the 1960s, as a leader of the Communist Party USA, and had close relations with the Black Panther Party through her involvement in the Civil Rights Movement despite never being an official member of the party. Prisoner rights have been among her continuing interests; she is the founder of Critical Resistance, an organization working to abolish the prison-industrial complex. She is a retired professor with the History of Consciousness Department at the University of California, Santa Cruz, and is the former director of the university's Feminist Studies department.[2]

35 minutes in. Department of History - Tufts University. Student Nonviolent Coordinating Committee. A final SNCC legacy is the destruction of the psychological shackles which had kept black southerners in physical and mental peonage; SNCC helped break those chains forever. 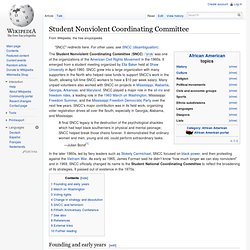 It demonstrated that ordinary women and men, young and old, could perform extraordinary tasks. In the later 1960s, led by fiery leaders such as Stokely Carmichael, SNCC focused on black power, and then protesting against the Vietnam War. As early as 1965, James Forman said he didn’t know “how much longer we can stay nonviolent” and in 1969, SNCC officially changed its name to the Student National Coordinating Committee to reflect the broadening of its strategies.

The Martin Luther King, Jr., Research and Education Institute - Liberation Curriculum - Resources. The Papers of Martin Luther King, Jr. Stokely Carmichael. Early life and education[edit] Born in Port of Spain, Trinidad and Tobago, Stokely Carmichael moved to Harlem, in New York, New York, in 1952 at the age of eleven, to rejoin his parents, who had migrated when he was aged two, leaving him with his grandmother and two aunts.[1] He had three sisters.[1] As a boy, he had attended Tranquility School in Trinidad until his parents were able to send for him.[2] His mother, Mabel R. 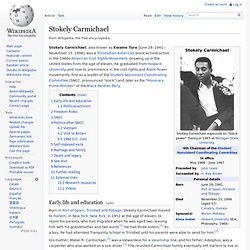 Alice Walker. Alice Malsenior Walker (born February 9, 1944) is an American author and activist. She wrote the critically acclaimed novel The Color Purple (1982) for which she won the National Book Award and the Pulitzer Prize for Fiction.[2][a][3] Early life[edit] Montgomery Bus Boycott. Events leading up to the bus boycott In 1944, while a Second Lieutenant in the United States Army, future athletic star Jackie Robinson took a similar stand in a confrontation with an Army officer in Fort Hood, Texas, by refusing to move to the back of a bus.[2] Robinson was brought before a court-martial, which acquitted him.[3] The NAACP had accepted and litigated other cases, including that of Irene Morgan in 1946, which resulted in a victory in the U.S. Supreme Court on grounds that the segregated interstate bus lines violated the Commerce Clause.[4] That victory, however, overturned state segregation laws only insofar as they applied to travel in interstate commerce, such as interstate bus travel,[5] and Southern bus companies immediately circumvented the Morgan ruling by instituting their own Jim Crow regulations.[6] Black activists had begun to build a case to challenge state bus segregation laws around the arrest of a 15-year-old girl, Claudette Colvin, a student at Booker T.

E. Congress of Racial Equality. Founding[edit] CORE was founded in Chicago in March 1942. Among the founding members were James L. Bayard Rustin.

"so the girl marries" dubois