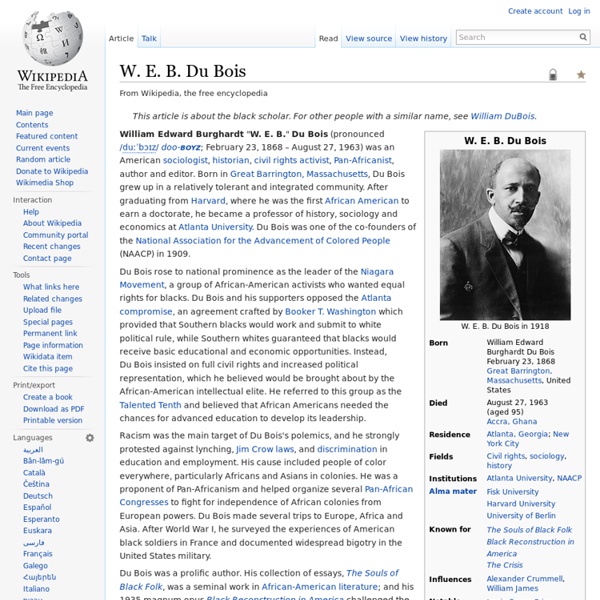 William Edward Burghardt "W. E. B." Du Bois (pronounced /duːˈbɔɪz/ doo-BOYZ; February 23, 1868 – August 27, 1963) was an American sociologist, historian, civil rights activist, Pan-Africanist, author and editor. Born in Great Barrington, Massachusetts, Du Bois grew up in a relatively tolerant and integrated community. Du Bois rose to national prominence as the leader of the Niagara Movement, a group of African-American activists who wanted equal rights for blacks. Racism was the main target of Du Bois's polemics, and he strongly protested against lynching, Jim Crow laws, and discrimination in education and employment. Du Bois was a prolific author. Early life Great Barrington's primarily European American community treated Du Bois generally well. University education In 1892, Du Bois received a fellowship from the John F. Wilberforce and University of Pennsylvania "Between me and the other world there is ever an unasked question: ... —Du Bois, "Strivings of the Negro People", 1897[20] Related:  civil war

Slavery Slavery is a legal or economic system under which people are treated as property.[1] While laws and systems vary, as property, slaves may be bought and sold. Slaves can be held from the time of their capture, purchase or birth, and deprived of the right to leave, to refuse to work, or to demand compensation. Historically, slavery was institutionally recognized by most societies; in more recent times, slavery has been outlawed in all countries, but it continues through the practices of debt bondage, serfdom, domestic servants kept in captivity, certain adoptions in which children are forced to work as slaves, child soldiers, and forced marriage.[2] Slavery is officially illegal in all countries,[3][4] but there are still an estimated 20 million to 36 million slaves worldwide.[5][6][7] Mauritania was the last jurisdiction to officially outlaw slavery (in 1981/2007), but about 10% to 20% of its population is estimated to live in slavery.[8][9] Terminology Types Chattel slavery Bonded labor

African-American History Ain't I a Woman Modern History Sourcebook: Sojourner Truth: "Ain't I a Woman?", December 1851 Sojourner Truth (1797-1883): Ain't I A Woman? Delivered 1851 Women's Convention, Akron, Ohio Well, children, where there is so much racket there must be something out of kilter. That man over there says that women need to be helped into carriages, and lifted over ditches, and to have the best place everywhere. Then they talk about this thing in the head; what's this they call it? Then that little man in black there, he says women can't have as much rights as men, 'cause Christ wasn't a woman! If the first woman God ever made was strong enough to turn the world upside down all alone, these women together ought to be able to turn it back , and get it right side up again! Obliged to you for hearing me, and now old Sojourner ain't got nothing more to say. This text is part of the Internet Modern History Sourcebook . Unless otherwise indicated the specific electronic form of the document is copyright.

Biographies Read profiles of influential African Americans from the colonial era to the present-day. From abolitionists to jazz musicians, discover more about the figures who shaped African-American history. Septima Poinsette ClarkSeptima Poinsette Clark was an educator and civil rights activist. Asa Philip Randolph: Civil Rights Movement Activist and Mentor Frederick DouglassFrederick Douglass' work as an abolitionist--speaking throughout the United States and Europe--as well as publishing a newspaper and slave narratives, make him an important member of the abolitionist movement. Members of the Black Panther PartyThis is a list of three prominent leaders of the Black Panther Party for Self Defense Toni Morrison: BiographyToni Morrison is a prolific writer whose novels about the African-American experience have received critical acclaim Countee CullenCountee Cullen was a prominent literary figure of the Harlem Renaissance. James FortenJames Forten was more than a wealthy African-American. Ida B.

Lost Cause of the Confederacy The Lost Cause is the American literary and intellectual movement that sought to reconcile the traditionalist white society of the U.S. South to the defeat of the Confederate States of America in the American Civil War of 1861–1865.[1] It forms an important aspect of the Commemoration of the American Civil War. History[edit] Many white Southerners were devastated economically, emotionally, and psychologically by the defeat of the Confederacy in 1865. Before the war, many Southerners proudly felt that their rich military tradition would allow them to prevail in the conflict. The term Lost Cause first appeared in the title of an 1866 book by the historian Edward A. Early's original inspiration for his views may have come from General Robert E. New South[edit] Historians have emphasized how the "Lost Cause" theme helped white Southerners adjust to their new status and move forward into what was called "the New South." Religious revivals[edit] Tenets[edit] Further adoption[edit]

10 Awesome Independent Record Labels [LIST] - MTT Open Here at Music Without Labels we do our best at providing you with some of the top independent music worldwide, which is why I’ve decide to show some love and promote the main industry that helps manage these artists’ insanely busy music schedules; Independent Record Labels! Now this list is in no particular order so their is no hierarchy of which label is better than the next. This is an independent community so it’s our job as indie people to promote quality independent music equally together. We will continue to promote the Independent Record Labels in this new series. 1. Label Genre(s): Dance (HOUSE) Description: Being started by one of the United Kingdoms’ largest dance DJs in Mark Knight, it was certain to be a hit immediately following their release to the world in 2003. Artist Count: 46 active Beat-Play Feature(s): Having had one of Music Without Labels favorite HOUSE DJs in the game made it a bit of an easier decision when trying to figure which labels should be on the list. 2.