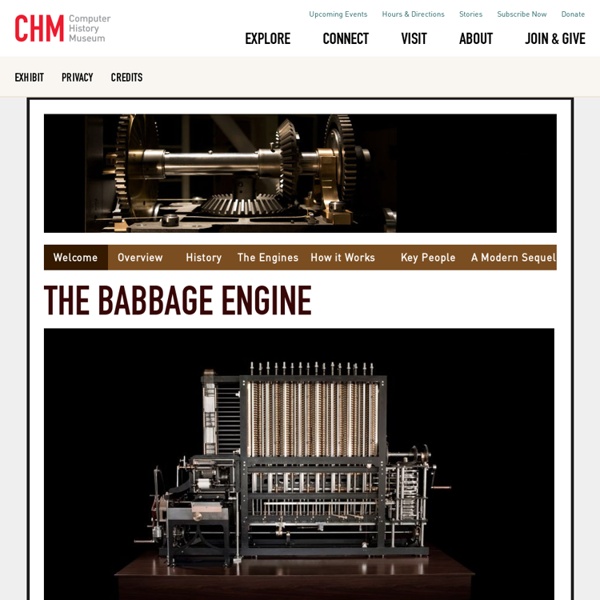 Building Stonehenge - Wally Wallington Can Move Anything! Key Notes: Monuments like Stonehenge are found all over the globe, and can be dated back to a period beyond 4000 years. Many books and mainstream archaeologists suggest otherwise, that these monuments were built no longer than 4000 years ago. However, growing new evidence has come to light over the years that proves these structures are far older than we once 'til this day modern science and engineering cannot replicate the complexity and the ingenuity required to construct the wonders that are The Great Pyramids of Egypt. Previous MediaNext Media

Computer History John Kopplin © 2002 Just a few years after Pascal, the German Gottfried Wilhelm Leibniz (co-inventor with Newton of calculus) managed to build a four-function (addition, subtraction, multiplication, and division) calculator that he called the stepped reckoner because, instead of gears, it employed fluted drums having ten flutes arranged around their circumference in a stair-step fashion. Although the stepped reckoner employed the decimal number system (each drum had 10 flutes), Leibniz was the first to advocate use of the binary number system which is fundamental to the operation of modern computers. Leibniz is considered one of the greatest of the philosophers but he died poor and alone. Leibniz's Stepped Reckoner (have you ever heard "calculating" referred to as "reckoning"?) Jacquard's Loom showing the threads and the punched cards By selecting particular cards for Jacquard's loom you defined the woven pattern [photo © 2002 IEEE] A close-up of a Jacquard card

Ada Lovelace, the First Tech Visionary | The New Yorker When Ada Lovelace was twelve years old, she wanted to fly. She approached the problem methodically, examining birds and investigating various materials that could serve as wings—feathers, paper, silk. In the course of her research, which began in February, 1828, according to her biographer Betty Alexandra Toole, Ada wrote and illustrated a guide called “Flyology,” to record her findings. She toiled away on this project until her mother reprimanded her for neglecting her studies, which were meant to set her on a rational course, not a fanciful one. Ada’s mother, Annabella Byron, was the straight-laced counterpoint to her father, Lord Byron, the Romantic poet, who called his wife the “Princess of Parallelograms.” But Lovelace reconciled the competing poles of her parents’ influence. Augusta Ada Lovelace is known as the first computer programmer, and, since 2009, she has been recognized annually on October 15th to highlight the often overlooked contributions of women to math and science.

History and Women: Maria Anna Mozart Maria Anna Mozart (30 July 1751 – 29 October 1829) Musician Maria Anna Mozart, beloved nicknamed Nannerl, was the elder and only sister of Wolfgang Amadeus Mozart. As children, both were considered gifted musical prodigies and their father, Leopold, arranged tours to display their talents to the masses in the grandest capitals of Europe. Both children could play the most challenging pieces and could compose into notes any song they heard. They enjoyed a pleasant childhood, indulging their musical creativity and creating their own childish kingdom. Thereafter, Leopold focused all his attentions on Mozart, not Nannerl. Victoria, one of her students, becomes her protégé. Even her choice of suiters were one-by-one turned away by Leopold. Nannerl grew ever more distant from Wolfgang, especially after his marriage to Constanze Weber. After her huband’s death, Maria Anna returned to Salzburg and supported herself once again by giving piano lessons.

World’s First Computer Rebuilt, Rebooted After 2,000 Years | Gadget Lab A British museum curator has built a working replica of a 2,000-year-old Greek machine that has been called the world’s first computer. A dictionary-size assemblage of 37 interlocking dials crafted with the precision and complexity of a 19th-century Swiss clock, the Antikythera mechanism was used for modeling and predicting the movements of the heavenly bodies as well as the dates and locations of upcoming Olympic games. The original 81 shards of the Antikythera were recovered from under the sea (near the Greek island of Antikythera) in 1902, rusted and clumped together in a nearly indecipherable mass. Many scientists have worked since the 1950s to piece together the story, with the help of some very sophisticated imaging technology in recent years, including X-ray and gamma-ray imaging and 3-D computer modeling. Now, though, it has been rebuilt. In the video from New Scientist below, Wright shows how the machine works. Image: The Antikythera Mechanism’s Olympic dial. See Also:

Automating Tinder with Eigenfaces While my friends were getting sucked into "swiping" all day on their phones with Tinder, I eventually got fed up and designed a piece of software that automates everything on Tinder. An update on Tinderbox: Well, I didn't think I'd do it. I even wrote in my post that I wouldn't. Since Tinder’s rising popularity, including its use by Olympic athletes such as snowboarder Rebecca Torr, Tinder has achieved critical adoption as a launchpoint for singles meeting singles. Dubbed "Tinderbox", the first version only took 3 weeks to build. The built-in bot builds facial models using your likes/dislikesBot examines profile images, cropping facesFaces are loaded into an "average" face representing choicesEigenfaces are computed from average facesBot then makes future selections based on Eigenface comparisonComparisons are essentially k-nearest neighbor selection Eigenface is a quick and easy algorithm to implement facial recognition without the use of complex software like OpenCV.

Who was Ada? | Ada Lovelace Day Who was Ada Lovelace? By Sydney Padua, author of The Thrilling Adventures of Lovelace & Babbage. Read the longer biography of Ada Lovelace by Suw Charman-Anderson, taken from our book, A Passion for Science: Stories of Discovery and Invention, but for a short overview of her life and achievements, read on! The woman most often known as ‘Ada Lovelace’ was born Ada Gordon in 1815, sole child of the brief and tempestuous marriage of the erratic poet George Gordon, Lord Byron, and his mathematics-loving wife Annabella Milbanke. Fearing that Ada would inherit her father’s volatile ‘poetic’ temperament, her mother raised her under a strict regimen of science, logic, and mathematics. At the age of 19 she was married to an aristocrat, William King; when King was made Earl of Lovelace in 1838 his wife became Lady Ada King, Countess of Lovelace. The Analytical Engine Her thwarted potential, and her passion and vision for technology, have made her a powerful symbol for modern women in technology.

19 Maps That Will Blow Your Mind and Change the Way You See the World. Top All-time. You Won’t Believe Your Eyes. Watch. Many lists of maps promise to change the way you see the world, but this one actually does. The maps above don't count towards the 19, so your world view hasn't changed yet. However, the binocular-like image represents your upcoming experience. You look around. Nothing. Time to blow your mind. 1. Most maps focus on demographics, geological makeup, and natural phenomena such as temperature and wind. I give you exhibit number one. A whopping 38 percent of states end with the first letter in the alphabet, which amazes to no end. 2. In contrast, zero — I repeat, zero — states end with the last letter of the alphabet (i.e. The only viable solution is to change current state names to end with zed. 3. We raise similar issues when we look at letters at the beginning of state names. 4. Several mini-explosions are going off in your head at this very moment, so brace yourself for what comes next. 5. Filler text. Lorem ipsum dolor sit amet, consectetur adipiscing elit. 6. 7. 8. 9 through 18. 19.

Jacquard loom This portrait of Jacquard was woven in silk on a Jacquard loom and required 24,000 punched cards to create (1839). It was only produced to order. Charles Babbage owned one of these portraits; it inspired him in using perforated cards in his analytical engine.[1] It is in the collection of the Science Museum in London, England.[2] It is based on earlier inventions by the Frenchmen Basile Bouchon (1725), Jean Baptiste Falcon (1728) and Jacques Vaucanson (1740)[6] A static display of a Jacquard loom is the centrepiece of the Musée des Tissus et des Arts décoratifs[7] in Lyon. Principles of operation[edit] The term "Jacquard loom" is somewhat inaccurate. Importance in computing[edit] The Jacquard head used replaceable punched cards to control a sequence of operations. Some early computers, such as the 1944 IBM Automatic Sequence Controlled Calculator (Harvard Mark I) received program instructions from a paper tape punched with holes, similar to Jacquard's string of cards. See also[edit]

How it Works | Babbage Engine Difference engines are so called because of the mathematical principle on which they are based, namely, the method of finite differences. In general, calculating the value of a polynomial can require any or all of addition, subtraction, multiplication and division. An advantage of the method of finite differences is that it eliminates the need for multiplication and division, and allows the values of a polynomial to be calculated using simple addition only. If the first few values of a polynomial are known, the rest may be calculated using simple repeated addition. The next step is to calculate the first and second differences. With these initial values calculated the rest of the values of the function can be calculated by reversing the process. The process can then be repeated to yield the next first difference (11) which may be added to the last function value to get F(6) = 40, etc.