Films For Action Presents: The Top 100 Documentaries Inspiring the Shift to a Sustainable Paradigm 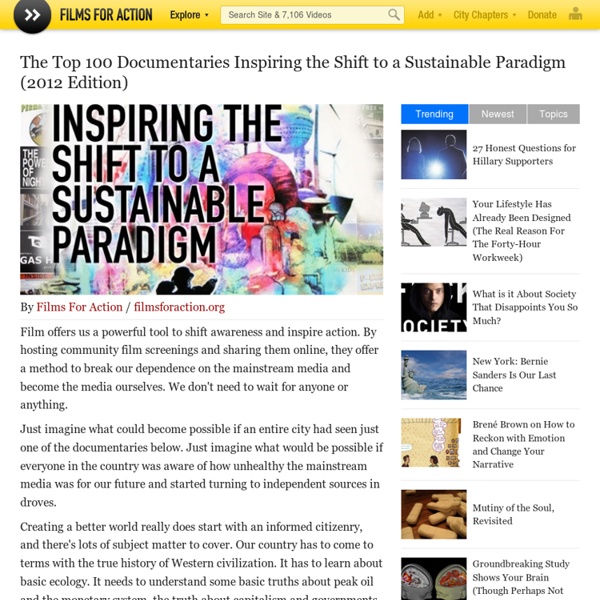 By Films For Action / filmsforaction.org Film offers us a powerful tool to shift awareness and inspire action. By hosting community film screenings and sharing them online, they offer a method to break our dependence on the mainstream media and become the media ourselves. We don't need to wait for anyone or anything. Just imagine what could become possible if an entire city had seen just one of the documentaries below. Just imagine what would be possible if everyone in the country was aware of how unhealthy the mainstream media was for our future and started turning to independent sources in droves. Creating a better world really does start with an informed citizenry, and there's lots of subject matter to cover. Our society needs a new story to belong to. But most of all, we need to see the promise of the alternatives - we need to be able to imagine new exciting ways that people could live, better than anything that the old paradigm could ever dream of providing. Community Suggestions

Waste = Food Man is the only creature that produces landfills. Natural resources are being depleted on a rapid scale while production and consumption are rising in na­tions like China and India. The waste production world wide is enormous and if we do not do anything we will soon have turned all our resources into one big messy landfill. But there is hope. Wilson Solar Grill Stores the Sun's Energy For Nighttime Grilling Many of us will be firing up our grills this weekend for some well-deserved barbecue time. After all, barbecuing is one of America’s greatest pastimes, but it certainly isn’t one of our most environmentally friendly. Whether you prefer charcoal, wood chips or propane, grilling releases emissions and contributes to poor air quality. Up until now, solar powered grilling has required, as you might expect, the sun, which means traditional fuel-fired grills are required after sunset.

live and behind the scenes of grid computing: Open Access, Open Data, Open Science 2012 marks National Mathematics Year in India. It was named so in honor of Srinivasa Ramanujan, a brilliant Indian mathematician called ‘a natural genius’ by Cambridge professor of mathematics GH Hardy. Ramanujan was born into extreme poverty in rural south India, but displayed an extreme talent for mathematics from an early age. His stratospheric genius was arguably so great that it went largely unrecognized and – despite his brilliance – Ramanujan often found himself on the brink of starvation and near-fatal illness.

A Quiet Revolution: The Earth Charter and Human Potential A 30-minute film featuring three dramatic case studies of how individuals in India, Slovakia and Kenya have contributed to solving local environmental problems. Narrated by Academy Award-winning actress Meryl Streep, and featuring interviews with UN Secretary-General Kofi Annan and other experts, the film's primary message is that even one person's action can make a dramatic difference. "...feeling powerless to affect the crisis facing humanity, many do nothing. But a growing number of ordinary people are carrying out a quiet revolution." "Sometimes I tell myself, I may only be planting a tree here, but just imagine what's happening if there are billions of people out there doing something.

Need to Choose a Creative Commons License? This New Tool Can Help Creative Commons licensing can be a good way for businesses and artists alike to protect their creative works while enabling productive sharing, but figuring out which of the six Creative Commons licenses is best for you can feel like a daunting challenge. I wrote a guide to the topic earlier this year, but now the Creative Commons organization itself has come out with a newly revamped tool to help users choose which license to adopt. “The license chooser has been completely redesigned for greater clarity and ease of use,” wrote Jonathan Palecek, a software engineer with the Creative Commons, in a blog post on Tuesday. 'Most Users Ignored It'

30 Challenges for 30 Days Did you know that it takes 30 days to form a new habit? The first few days are similar as to how you would imagine the birth of a new river. Full of enthusiasm it gushes forth, only to be met by strong obstacles. Essay of the Day: Do-It-Yourself Biology and the Rise of Citizen Biotech-Economies In order to set up a laboratory in a garage, people depend on a multitude of objects, networks, and people. They heavily depend on other people interested in do-it-yourself biology, they rely on scientific institutions (even if indirectly), they rely on the sharing of information, on the circulation of objects, on Internet platforms, on emails, on donations, etc. In short, people who want to practice do-it-yourself biology need to tap into these emerging and open collectives of people, ideas and objects that are currently materialising around the notions of garage biology, DIY biology, biohacking, etc. These citizen biotech-economies are to be open, collective, distributed, and accessible. * Article: Build Your Own Lab: Do-It-Yourself Biology and the Rise of Citizen Biotech-Economies. by Morgan Meyer. Special issue (#2) of the Journal of Peer Production on Bio/Hardware Hacking, 2012.

New leaked TPP text puts fair use at risk EFF believes that it is vitally important that fair use and exceptions and limitations to copyright be protected in international trade agreements. But the United States Trade Representative (USTR) is putting Fair Use at risk with restrictive language in the Trans-Pacific Trade Agreement (TPP). The US and Australia are both proposing very restrictive text, and Peru is willing to accommodate the bad language. KEI reports on the leak of the negotiating TPP text on copyright limitations and exceptions. “Limitations and exceptions are positive enabling doctrines that function to ensure that intellectual property law fulfills its ultimate purpose of promoting essential aspects of the public interest.

The question of belief, part II Last time I examined in detail James’ famous “Will to Believe” essay, and found it disappointing to say the least. In fact, it is so badly argued that it is hard to imagine why it is so widely cited (maybe most people who cited it haven’t actually read it?), or why it has not contributed to at least questioning James’ credibility as a first rate philosopher (he did write plenty of other nonsense, you know). At any rate, it’s now time to turn to an examination of the other classic about belief, this one on the side of skepticism: William K.

Dissing the Disinformation At some point in the earliest days of e-mail, the internet began to take away our power of critical thought. It moved in slowly, taking hold like a cancer and then spreading. It preyed on our trust. It made us think it wanted to protect us from things or tell us about interesting things of which we were unaware. But the truth was, it was making us stupiderer. Soon, like the bleating sheep it wanted us to become, we began blindly forwarding an unwarranted tonnage of unfiltered bullshit. Should it brie in the bin? This week, during a Westminster debate, Richard Benyon MP claimed that the average family throws aways £50 a month in food waste. The statement from the Minister for Natural Environment and Fisheries has attracted a lot of attention - whether it's Labour claiming this is "Let them eat leftovers" rhetoric, or Conservatives claiming that Government is trying to "preach to people" about their food choices. But little attention has been paid to whether the number is actually correct. Methodology The original source of the data is the Waste & Resources Action Programme, conveniently acronymed WRAP. Here's how they arrived at that all important £50 monthly food waste statistic: