How to fight - Targeted Individuals 101. (I received an e-mail with an essay attached to it about OSEH, part of the essay is about things target individuals can do to fight back the harassers. 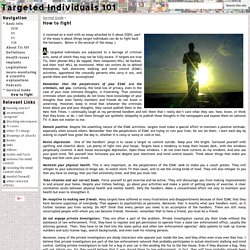 @dailyexpressuk #Victims #Survivors #Whistleblowers Unite: Tell Your Story to Poisoned Pilot #LenLawrence. UNITE HERE (Photo credit: Wikipedia) Subject: Tell me your story Dear Friends As some of you are aware I have spent many years gathering evidence and data to try and understand the mechanisms used to move me from a position of relative stability, home owner, professional pilot, family man to a shell of a person medicated until I lost capacity and all of the things I held dearest whilst under the guardianship of the Official Solicitor to the Senior Courts. 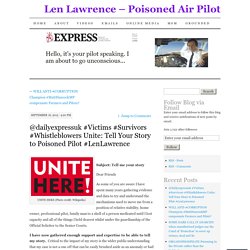 UNDER THE RADAR / LEN LAWRENCE PILOT AND THE COURT OF PROTECTION 6/7/2013. CHECK YOUR ‘mental capacity’: if your Judge is not on the list, his orders are void! Len Lawrence is a retired British Aerospace pilot who suffers from the poisoning of inhaling the fumes of aeroplanes. 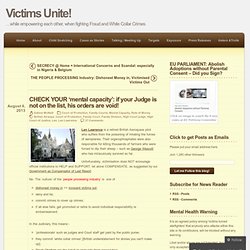 Their organophosphates were also responsible for killing thousands of farmers who were forced to dip their sheep – such as George Wescott who has miraculously survived so far. Chemical Poisoning (no. 13) This article in the Western Morning News about George Wescott who got poisoned from a Government imposed chemical for sheep dipping. 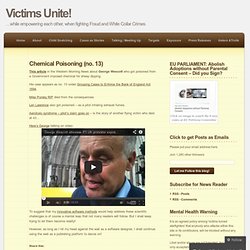 His case appears as no. 13 under Grouping Cases to Enforce the Bank of England Act 1694. Disabled man ‘under court protection’ evicted. OPG - Public Guardian & me the carer. Corrupt Lawyers, Judges, Police and Government destroy America and your rightsUgly Judge. The Lion Sleeps No More - Moon Control. Royal Sun Alliance, child abuse victims and the legal decision that shames Britain. If anything sums up the filthy and dismissive attitude of the UK establishment towards child abuse victims it’s this report from Justice Denied: ” Royal and Sun Alliance Insurance Group spent £750,000 pounds in legal fees to prevent paying out £200,000 to victims of child abuse. 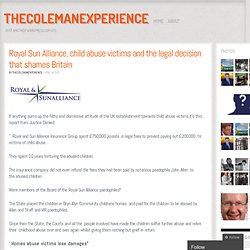 Britain’s care home scandal: abused children would be far safer sleeping on the streets. If you thought the emerging scandals surrounding the abuse of vulnerable children in Britain’s care homes was a new phenomenon, think again. 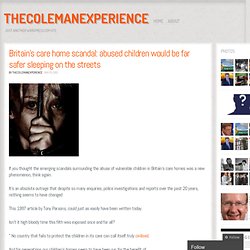 It’s an absolute outrage that despite so many enquiries, police investigations and reports over the past 20 years, nothing seems to have changed This 1997 article by Tony Parsons, could just as easily have been written today. Isn’t it high bloody time this filth was exposed once and for all? ” No country that fails to protect the children in its care can call itself truly civilised. And for generations our children’s homes seem to have been run for the benefit of child abusers rather than the youngsters they are meant to protect. Sir William Utting has published a devastating report into the abuse of children who are taken into care. The 230-page report, People Like Us, was commissioned last year after a series of abuse scandals in council-run homes.

A third of children in care do not receive a full-time education. Queenie, the missing children, an International Arrest Warrant and the mysterious non-stop trots. We nearly fell off our throne this morning when we heard the news that Her Maj is being advised to retire from public life. 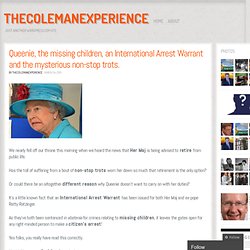 Has the toll of suffering from a bout of non-stop trots worn her down so much that retirement is the only option? Or could there be an altogether different reason why Queenie doesn’t want to carry on with her duties? It’s a little known fact that an International Arrest Warrant has been issued for both Her Maj and ex-pope Ratty Ratzinger. Why are the police covering up VIP child abuse?

Ever wondered why so many child-abuse victims never get the justice they deserve? 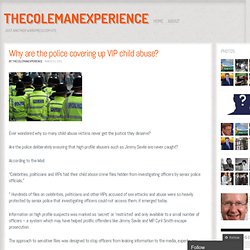 Are the police deliberately ensuring that high-profile abusers such as Jimmy Savile are never caught? According to the Mail: “Celebrities, politicians and VIPs had their child abuse crime files hidden from investigating officers by senior police officials.” ” Hundreds of files on celebrities, politicians and other VIPs accused of sex attacks and abuse were so heavily protected by senior police that investigating officers could not access them, it emerged today.

Vaccine Maker Tells The Truth To Clear Conscience, 44 Girls Have Died Since Having Gardasil And Cervarix-(Videos) (Before It's News) (N.Morgan) Too bad her conscience didn’t kick in until AFTER there were deaths. 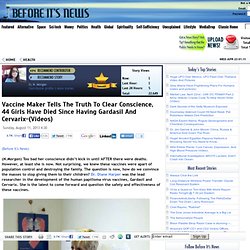 However, at least she is now. Not surprising, we knew these vaccines were apart of population control and destroying the family. The question is now, how do we convince the masses to stop giving them to their children? Dr. Image source She made the surprising announcement at the 4th International Public Conference on Vaccination, which took place in Reston, Virginia on Oct. 2nd through 4th, 2009. Eros And The Eschaton "What Science Forgot" Terence McKenna. Jill Bolte Taylor's stroke of insight. WORLDWIDE ARREST WARRANTS FOR OBAMA & BUSH. Filming Cops. Justice or Just Us. Judicial Corruption.